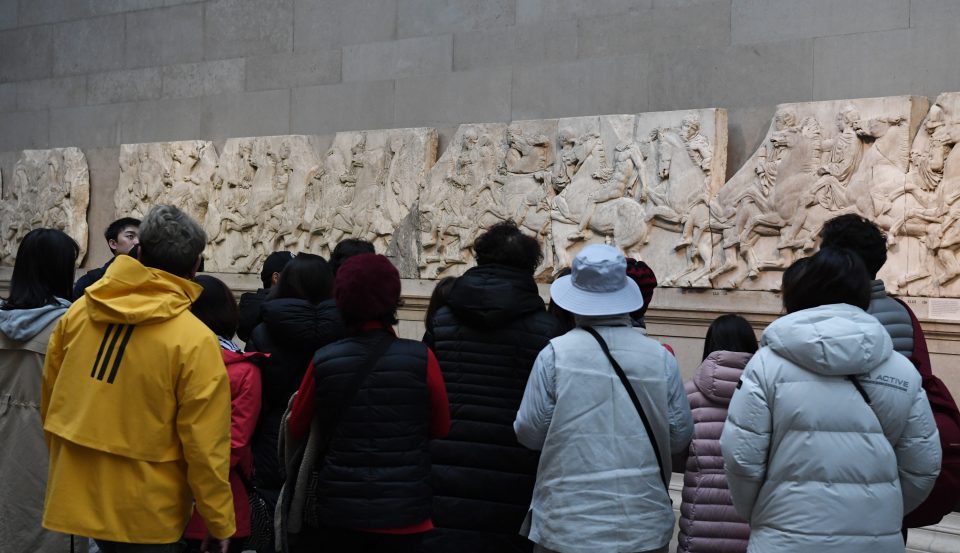 epa08228383 Visitors look at the 'The Parthenon Marbles' collection, also known as the 'Elgin Marbles', at the British Museum in London, Britain, 19 February 2020. According to news reports, the UK rules out the possibility of returning artefacts such as Parthenon Marbles in an eventual trade deal with the European Union (EU) following Brexit. EPA-EFE/FACUNDO ARRIZABALAGA

The marbles are indeed part of world history and heritage, but they remain central to a nation’s story and identity

Each time I visit my father’s town Pylos, formerly Navarino, in Greece’s southern Peloponnese, I am reminded of Britain’s central role in the country’s independence and all those grecophile Englishmen who inspired the rest of Europe to get behind the struggle to free the cradle of western civilisation from almost four hundred years of Ottoman rule.

It was British, Russian and French frigates that destroyed the entire Turco-Egyptian fleet in the final and most decisive Battle of Navarino in October 1827. There’s a marble monument in the central square extending the eternal gratitude of the Greek people. For some reason, it always reminds me of the Parthenon Marbles in the British Museum.

It’s been more than two centuries since they were shipped off to England by Thomas Bruce, 7th Earl of Elgin – the British ambassador to Constantinople, at the time.

The link between British philhellenism and Greek independence has always been celebrated in Greece.  Lord Byron is a towering figure amidst the pantheon of patriots who sacrificed so much for Greece.  Everyone also knows how he openly lamented the ‘pilfering of the Parthenon’ by ‘British hands’.

Today things are very different.  There are no more Byrons enamoured of the ‘has been’ on the hot, dusty fringes of Europe with its ‘second class’ Europeans who ‘can’t get their act together’ – let alone expect to have western civilisation’s greatest treasures returned to them.

Ever since the establishment of the modern Greek state, successive governments have sought the return of the Parthenon Marbles.  Arguments against their repatriation have ranged from the British Museum’s ‘lawful ownership/custodianship’ to Greek ‘incompetence’ and the absence of a space to house them.

We now know that the permission granted to Elgin by the Ottoman government did not include the wholesale removal of the sculptures but only ‘casts…and some pieces of stone with old inscriptions and figures’.  However, as a distinguished diplomat of the greatest colonial power in history, Elgin was able to extract half of the Parthenon’s friezes, metopes and a Caryatid, or maiden.

Elgin’s actions were part of a widespread practice of arbitrarily taking from the colonised or, in the case of the Greeks, the occupied.  Thousands of items currently on display in the great museums of the world were acquired in the above manner.  This is something rarely discussed because of the prestige of these institutions and a systemic resistance to postcolonial introspection – i.e., taking responsibility for past wrongs.

Colonialism, in the broader sense, never considered the humanity of the colonised, systematically subjugating and dehumanising native populations for centuries.  It called them savages, brutes, dull-witted, it took their family members, culture, remains and dignity.

Even though Greece was not a colony of Britain, the removal of the Parthenon Marbles was consistent with colonial attitudes towards the natives as personae non gratae or as one 19th century writer described the Greeks, ‘jarring accidents thrown among the sacred ruins of ancient Greece’.

The passage of time and an affected amnesia, however, absolves no one of their moral responsibility to the descendants of those who have been wronged and continue to suffer.  The current riots in the US speak to a similar injustice and indifference to the needs of disregarded and disrespected groups; to those who have had something taken from them.

Rather than working towards addressing their historical responsibility, the world’s repositories of plunder prefer delivering patronising monologues from behind a curator’s desk about their noble intentions and everybody else’s exaggerated sentimentality.

Displaying artefacts dubiously acquired is not necessarily a sign of civilisational respect.  In the case of the Parthenon sculptures it has more to do with institutional vanity.  Respect extends to wearing another’s skin in order to experience their reality and existential void.  Especially when an entire nation is on its knees pleading with you to return something that ethically and lawfully belongs to it.

How would those who refuse to even consider returning the Parthenon sculptures to Greece feel if the Louvre – having somehow acquired a few pillars from the iconic Stonehenge – outrightly refused to return them despite their significance to the British people?

The flippant dismissal of what is profoundly important to others is conceited and cruel? This is not confined to the Parthenon sculptures.  It is the attitude towards indigenous remains and relics held by museums around the world.

A spear or shield purportedly used by an indigenous warrior defending his homeland holds an entirely different significance for his descendants.  Its sacredness is diminished outside its homeland and the homeland is left incomplete without it.  An indigenous Australian elder might tell you that: ‘for others it’s part of history.  For us it’s our story’.

The Parthenon sculptures embody a uniquely Greek story.  One reflected in every subtle curve and groove of those Pentelic marbles.  They constitute conduits or spiritual links with ancient kin, the footprints of their artistic and intellectual journey through time, calved on material born of the Greek terrain.  They are indeed part of world history and heritage, but they remain central to a nation’s story and identity.

Then again, there are no more Byrons.

Dimitri Gonis is based in Melbourne, Australia