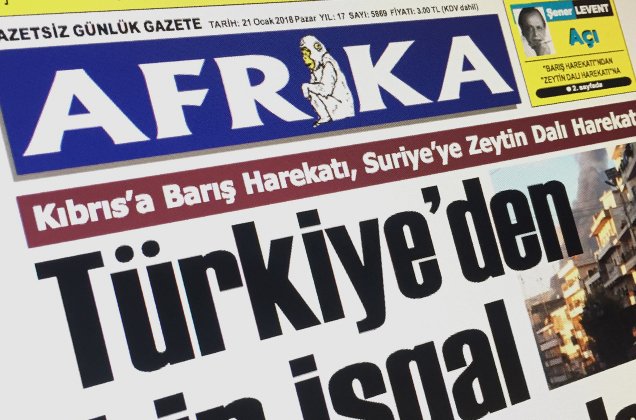 A heated debate between the legendary Turkish Cypriot opposition daily Afrika and the International Students Organisation VOIS about the newspaper’s masthead has come to an end with the announcement by the editor-in-chief Sener Levent on Saturday that he was removing an ape-like image from the newspaper’s logo.

“I will say ‘goodbye’ to my dear monkey and remove it from our logo,” Levent wrote in his Saturday column, insisting that the logo at the centre of the controversy had been “designed without any malicious intent”.

Levent also noted that what had begun as a discussion with VOIS after the students raised objections to the newspaper’s masthead depicting the image of an ape, had deteriorated “into a lynching campaign” since being  joined by “those who have never sympathised with the paper.”

“The unfair attacks against Afrika stunned even our southern Cypriot brothers. They found these racist accusations very ridiculous. Even those who do not agree with some of our ideas rejected them,” Levent wrote in his column.

But VOIS president Emmanule Achiri told the Mail that while the student body was happy with Levent’s decision, he felt that the well-known journalist should have shown greater awareness of the reasons why the removal of the ape from his paper’s logo was such an important issue for African students attending north Cyprus’ universities.

“Our victory is bitter-sweet,” Achiri said.  “It is good that Mr Levent decided to change the logo and we are celebrating it. This shows what a collective action can do. This is a step in the right direction. However, it is also important for him to recognise his mistake and his role in promoting racial stereotypes.”

The self-funded, student-formed VOIS (Voices of International Students) was set up in 2018 to raise awareness and combat discriminatory practices in relation to overseas students studying in the north of Cyprus. The organisation has also been active in helping foreign students with their financial problems. During the Covid-19 lockdown, it organised the distribution of food packets to hundreds of students who were unable to work as well as helping negotiations with their landlords over unpaid rents.

The discussion between Afrika and VOIS about removal of the ape from the newspaper’s logo has been ongoing over the past two years but intensified within last several weeks.

“Recently, as part of our campaign of solidarity against racial discrimination, following the gruesome murder of George Floyd in the United States, we once again raised the issue of the racial prejudice of both the name Afrika as a choice for the newspaper, and the depiction of an ape [in its logo],” a VOIS statement released last week proclaimed.

The statement maintained that “by using a depiction of an ape in the middle of the Afrika logo, Levent and his staff continued a history of simianisation, which has existed for centuries.”

According to the statement, “simianisation, the disparaging comparison of black people to apes, has a long history dating back to slavery and the slave trade right into today’s world.”

The student body also criticised the reasoning behind Levent’s decision to switch the title of his paper from “Avrupa” (Europe) to “Afrika”, claiming that the name change was an attempt to enforce an impression that north Cyprus was a lawless place, thus reinforcing a stereotype of Africa “as a continent and land of no justice and no laws”.

Levent disagreed with the VOIS accusations.

“To start with, the reason we called our paper Afrika is different. As everybody knows, at that time our paper had many court suits instigated by the north Cyprus’ government and so had to change its name. We wanted to call it New Europe but we were told we could not do it”, he told the Cyprus Mail on Friday last, just before announcing his decision about the removal of the logo.

Levent also vehemently rejected the suggestion that the logo has any association with simianisation.

“The monkey in our logo derives from the image of the three monkeys who don’t see, don’t hear and don’t say anything. We wanted to have a logo that symbolises that we are different from those three monkeys — one that says we see, hear and say everything. That is why our monkey has open eyes, ears and mouth,” he said.

Levent also pointed out to the fact that his newspaper has been in print since 1991 and as the foremost paper of opposition in the north has received countless visitors. Moreover, since the switch in title, he himself has been interviewed by many foreign journalists and in contact with a wide array of diplomats, yet not once has anyone complained to him about either the paper’s name or logo.

“This accusation of racism against Afrika is actually a dangerous thing. As a matter of fact we are the only paper in the north that has been constantly standing up for justice. Now, I would not be surprised if suddenly even Recep Tayyip Erdogan calls us racist.”

But Achiri said that while he recognised the significance of Afrika for Turkish Cypriots, the very fact that the paper didn’t grasp how offensive and problematic its logo was makes it even more important that the student body succeeds in flagging the underlying cause of the controversy.

“Yes, our target here is the progressive left. But this is exactly why it is so important. We all know that the right wing is racist. However, the fact that the left which should be synonymous with anti-racism is also perpetuating such images makes having this debate vitally important,” he pointed out.

“[The fact that Afrika will change its logo] is not a signal of victory, rather it is should be a moment of collective self-reflection, one in which we are honest enough to assess what values we are willing to upload as a society. This has been a trying moment for many of us, and we will have more trying moments. The ugly tentacles of bigotry, racism, xenophobia, as well as other forms of discrimination are still well and truly alive. The war is yet to be won,” Achiri concluded.

Access to Hala Sultan Tekke mosque is not restricted for non-Muslims, Imam says