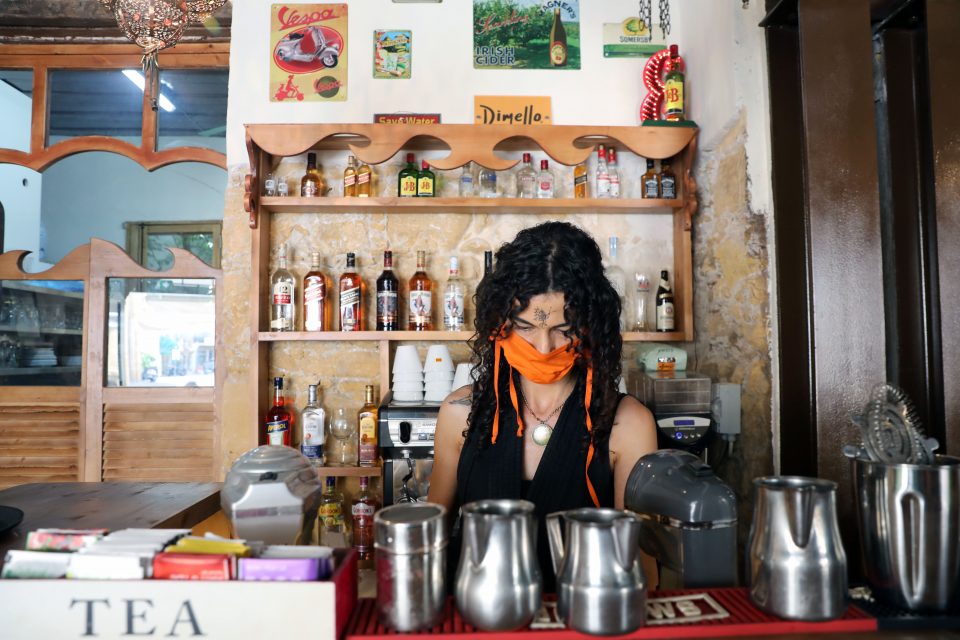 A young woman at work in a Nicosia cafe. Some businesses have not yet applied for the new employee subsidies as the conditions attached would require them to keep staff on for longer and some feel the future is too uncertain (Photo: CNA)

Businesses balk at renewing job incentives, fear it would only delay, not stop likely layoffs

UNCERTAINTY surrounds the latest package of measures for supporting the economy, which amounts to €150 million, with some businesses considering not applying at all because it would commit them to not making redundancies for a certain period.

“There are companies that had not even applied for the 13 May – 12 June period so as to speed up the redundancies and make them in August rather than October,” said a Sek union official. He explained that a company could not lay off staff for a period equal to the months it received assistance plus one month.

A company which joined the government scheme for two months, during which the state covered 60 per cent of an eligible company’s wages, would not be able to make redundancies for another three months after the assistance period. Printing businesses and some commercial enterprises were among the companies that did not join the scheme and notified the union that they would lay off staff, said the Sek official.

The scheme, which will last until October, was aimed at preventing mass redundancies during the lockdown and was successful in achieving its objective, but after the restart of the economy company owners are now considering whether their business would survive with existing staff numbers in the new conditions.

Presenting the latest package, which consists of five schemes, finance minister Constantinos Petrides said that with the programme for supporting the economy, “the government, effectively shouldered all the burden for the operation of the economy during the lockdown and the period of the gradual lifting of measures.” Public funds supported 190,000 people, 26,000 businesses and 22,000 self-employed.

Public funds, however, were not inexhaustible, and the government, according to Petrides had spent a staggering €3 billion in measures to support the economy, protect jobs and keep business afloat. The money is running out and it is highly unlikely there will be funds for support schemes after October.

The president of the Cyprus Chambers of Commerce (Keve), Christodoulos Angastiniotis also believes there will be no more state support as state funds were running low. “The support schemes helped business get through the lockdown,” he said. “Businesses that were not profitable got an extension of life thanks to the support measures, but whether they can survive is another matter,” he added.

“Everyone will measure whether the fall in business will be temporary and there will be a recovery or if they will have to cut jobs to survive in new conditions,” said the union official.

Greater optimism was expressed by a top official at the finance ministry, who believed there would not be that many redundancies because consumption was high and “the market is doing better than last year.” While this seemed very surprising, the official pointed out that most people made big savings during the lockdown and now had excess cash to spend. “Car sales have almost returned to the pre-crisis levels,” said the ministry official.

Much will depend on the tourism market, as Petrides told this newspaper in an interview two weeks ago. “I am cautiously optimistic about the economic recovery but we need to the recovery of tourism to make it happen,” he said.

The package announced on Wednesday is aimed at helping the tourism industry by offering incentives to hotels to open, by covering 60 per cent of staff wages. This would make it less of a risk for hotels to open, because they could do this cautiously by bringing back only a small percentage of their staff, until they have a better idea of bookings, said the president of the Hoteliers Association, Haris Loizides.

The scheme might not be so helpful to big hotels that might have 200 to 250 employees and face the risk of 10 per cent occupancy, but for smaller hotels the state assistance would be a major incentive to reopen as it reduces the risk to the hotelier.

It seems to have already had a positive impact in Paphos. The chairman of the Paphos hoteliers, Thanos Michaelides, told Cyprus News Agency on Saturday he expected 15 to 20 hotels to reopen by the end of the month instead of the initial 10.

Everything, however, depend on how many tourists will arrive. Airports opened properly on Saturday and according to Loizides the next 10 days will offer a “much better indication of how things will shape.”

Michaelides is of the same view, saying the situation will become clearer in early July. “Hoteliers are waiting to see what happens with our main markets since without the British and Russian markets it is very difficult for a large number of hotels to resume operation,” he told CNA.

The government support measures can only protect jobs and assist businesses for a finite period – until October – but as Petrides has said the recovery of tourism will be key, not just for the hotel industry but the economy as a whole.

Our View: Pragmatic foreign policy should be about achieving goals