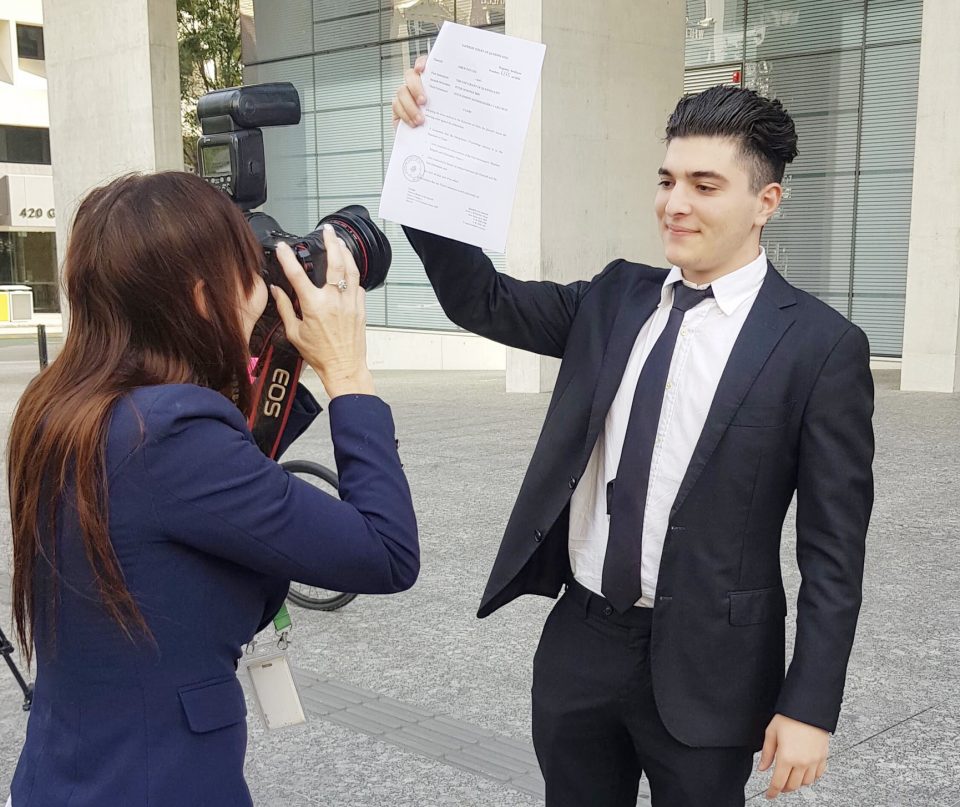 One of his Cypriot forebears fought the Germans occupying Greece in World War II, another was involved in the Eoka struggle against British rule. Now Drew Pavlou, just 21, is in the crosshairs of the Chinese Communist Party (CCP) because of his vociferous activism against its growing influence in his native Australia.

And the University of Queensland student’s David versus Goliath battle is making headlines around the world. He says he was assaulted by pro-CCP supporters at a peaceful rally he organised on campus in support of the Hong Kong protests and has received death threats. At the same time, he’s embroiled in a A$3.5 million lawsuit which he has filed against his university after he was suspended for his activities.

Pavlou’s hard work ethic, courage in fighting against the odds and strong ancestral links go above and beyond the stereotype of grit and determination that characterise Cypriot communities abroad.

Speaking to the Sunday Mail this week, Pavlou – who is of Cypriot descent on both sides of his family – said their impressive history in fighting against the Nazis in Greece and the British colonial forces in Cyprus has been a strong influence.

Pavlou said his maternal great-grandfather, Antonis Nicolaou, was a hero and a major inspiration.

“His example has always been inspiring to me, he’s one of my greatest heroes because he fought against fascism.”

Nicolaou fought in Greece in WWII and was captured by the Nazis and interred in a prisoner of war camp in Austria for many years.

“He tried to escape many times at great personal risk,” Pavlou said.

“On my father’s side, my yiayia’s brother fought for the first version of Eoka to liberate Cyprus from British colonialism.

“My Cypriot ancestors are my heroes.”

But his roots are now firmly in Australia.

“On my father’s side, my papou Andreas, came to Australia during the late 1960s,” Pavlou said. “He worked in gruelling sugar cane fields in North Queensland and hoped to return to Cyprus after raising money but the ’74 invasion prevented that.”

The 21-year-old’s activism spans the political spectrum and touches on issues ranging from police brutality in the US, refugee rights in Australia and LGBTQI+ inclusion.
But it is his unwavering activism – mainly against the Chinese Communist Party – that has landed him in real trouble and garnered international headlines.

In July 2019, Pavlou organised a rally at the University of Queensland (UQ) in support of the Hong Kong protests. Pavlou said he was assaulted by pro-Chinese Communist Party demonstrators. That week the Chinese consul-general in Brisbane, Xu Jie, praised the “spontaneous patriotic behaviour” of the pro-China members of the crowd, and effectively, Pavlou says, accused him of “anti-China separatist activities – a capital crime in China”.

Lawyers for Pavlou in May lodged a formal complaint calling on the university to dismiss Xu Jie who also held an adjunct professor position.

The Global Times, a daily newspaper with close links to the Communist Party of China, published an article calling him an ”anti-China rioter”.

Pavlou, an elected representative on the university’s senate, contends that such language has put a target on his back and a green light for pro-Beijing activists to assault him – which has led to death threats.

Pavlou was suspended by the University of Queensland late last month when it was alleged he had breached its code of conduct – in part due to his provocative stunts for which he has become well known.

The activist mockingly had labelled the university’s Confucius Institute a ‘coronavirus biohazard zone’. This all leads to the question of whether Pavlou is a peaceful protester or a provocateur poking a bear.

The answer to that will largely depend on one’s view of China’s role in the world.

“I’m not easy with people using me and my activism as a stick to beat China with,” Pavlou says. “I am uneasy when people refer to me as ‘anti-China’, I fundamentally reject anti-Chinese racism.”

His own brand of activism – with slick black hair and clean-shaven face – has gained coverage ranging from the Guardian, Daily Mail, Wall Street Journal and the Washington Post – just to name a few.

Pavlou has now gone on to sue the university, its chancellor and vice-chancellor for 3.5 million dollars. He filed the claim in the supreme court of Queensland for damages relating to a breach of contract and defamation.

And while his first big foray into activism was to support the Hong Kong protesters, he has since shone a light on Australian universities’ tight relations with China.

The Guardian reported in May that under parliamentary privilege, the Liberal senator James Paterson revealed that the vice-chancellor of UQ, Peter Hoj, had received 200,000 dollars bonus based partly on success in growing the university’s relationship with China.

Government figures show that Chinese students account for 28 per cent of the 750,000 international students in Australia. The universities could lose A$12bn (£6.5bn) in just two years if Chinese students took up on Beijing’s recent advice to stay away from Australia.

China has issued a warning to prospective students to rethink studying at Australian universities, deepening a political rift between the two nations. Its education ministry cited the pandemic and racism against Asians as the two main concerns. The move is the latest estrangement in relations after Australia called for an independent inquiry into the origins of the coronavirus.

Asked how his parents feel about his activism, Pavlou told the Sunday Mail: “My parents are really quite supportive lately which I am so thankful for.

“At first it was very hard for them as they are quiet people, but now they support me a lot.”

The Australian Cypriot community at most amounts to about 80,000 but it has produced one of the loudest and fiercest critics of China’s influence in the country.