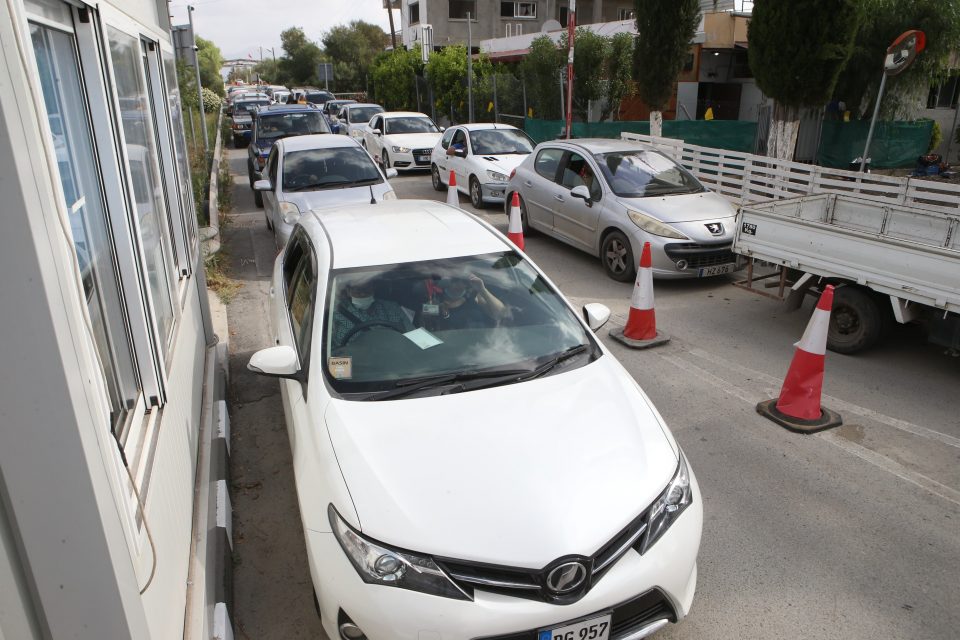 Crossings between the two sides began to pick up on Monday as hundreds of Turkish Cypriots passed through two checkpoints, though movement from the south of the island to the north was less due to differing conditions imposed by both sides.

According to the latest data on Monday afternoon, 605 people from the north had crossed plus 493 in the other direction, through Ayios Dhometios. A handful of people, four, crossed at Ledra Palace which the Turkish Cypriot side has kept closed. No information was given about these people, but it is believed they may have had special permission.

However, the non-alignment of the policies on both sides has caused a lot of confusion.

Late Sunday the Turkish Cypriot ‘cabinet’ announced it would open five checkpoints, including Ledra Street – though it remains shut on the Greek side –  to Greek Cypriots and permanent residents of the Republic who wish to cross, and requiring only a one-off negative Covid-19 test.

This means Greek Cypriots can also go to the north with the one-off test results as long as the test is not in the Greek language.

However, crossing back to the government-controlled areas, the same test would need to be less than 72 hours old under the Greek Cypriot side’s rules, though they do accept Turkish-language tests.

Government spokesman Kyriacos Kousios on Monday, however, accused the Turkish Cypriot side of playing political games since it did not open the Limnitis crossings that would allow Kato Pyrgos residents who work in Nicosia to cross to get to their workplaces.

In addition to the futile opening of Ledra Street,  the Turkish Cypriots also opened Ayios Dhometios, Zodia, Pergamos and Strovilia.

Initially, when lifting restrictions, the Greek Cypriot side said that from June 8, only Turkish Cypriot workers, students, people needing medical treatment, plus Maronites and Greek Cypriots living in the north could enter by car. Greek Cypriots who live in Pyrgos and work in Nicosia were later added to the list of groups.

At that time, the Turkish Cypriot side said the same groups could cross to the south of the island but would have to enter 14-day quarantine when they got back, or remain until July 1 when the north would lift quarantine restrictions.

This prompted some Turkish Cypriot workers to decide to stay in the government-controlled areas until July 1, the same day the north had planned to open flights from Turkey.

The Cyprus government then said on Saturday that for humanitarian reasons, it also would allow the same specific groups to cross with a one-off negative test but everyone else outside of the exceptions, would need to produce a test that is less than 72 hours old in order to enter the south of the island.

On Sunday, the Turkish Cypriots then pulled another about-face saying that Greek Cypriots and permanent residents in the Republic could cross with a one-off negative test if they can prove they have not travelled abroad in the previous 14 days, or if they have travelled, that they have come from a country they have categorised as ‘safe’.

However, this also means that when returning to the south of the island, under the Republic’s rules, their test would still need to be less than 72 hours old. Health professionals will also be carrying out random checks on the Greek Cypriot side.

Announcing the ‘cabinet’ decision on Sunday, Turkish Cypriot ‘foreign minister’ Kudret Ozersay said they had moved the opening date forward from July 1, the expected start of arrivals from Turkey via air and sea.

He said the Greek Cypriots had set stricter conditions, requiring a test result from Turkish Cypriots outside of the specific groups every 72 hours. “They created two categories,” he said. “Our citizens must know that the Greek Cypriot side implements different and more difficult conditions than us.”