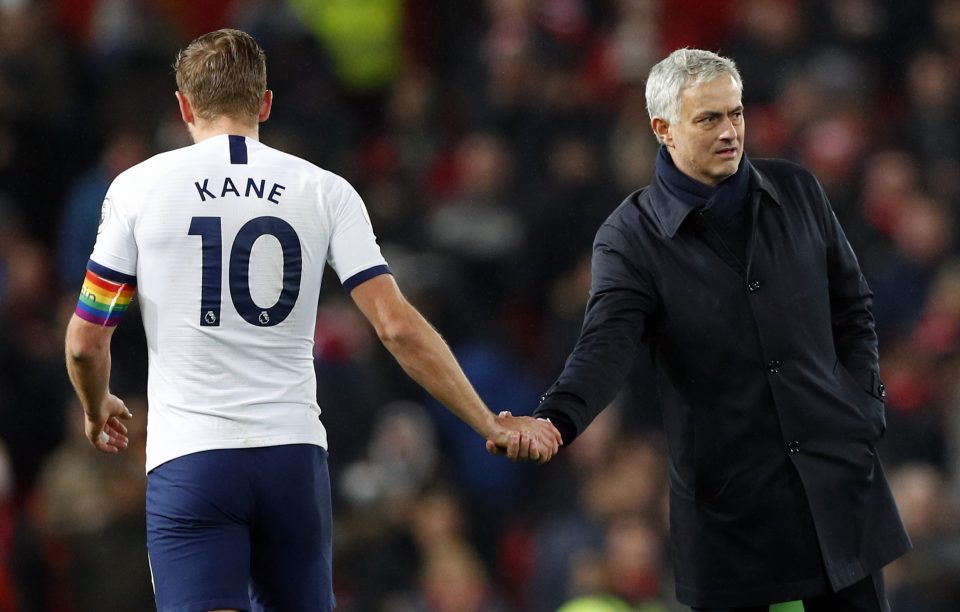 Jose Mourinho launched an impassioned defence of Harry Kane's form under his playing style at Tottenham. The striker truggled to make an impact against Man United on Frday night - his first match since returning from a hamstring surgery in January

Tottenham boss Jose Mourinho went on the attack in his defence of comments made about Harry Kane by Paul Merson.

The Sky Sports pundit suggested Kane would want to leave Spurs because of Mourinho’s pragmatic style of play and picked apart the England captain’s performance in Friday’s 1-1 draw with Manchester United.

But Mourinho, reading from a piece of paper in a clearly planned response, listed the scoring stats of former strikers Didier Drogba, Cristiano Ronaldo, Karim Benzema, Diego Milito and Zlatan Ibrahimovic and said Kane would have no issues scoring goals.

“I feel a bit strange at some analysis and some comments, especially as it looks for me at the beginning of some comments and analysis have started from Paul (Merson),” Mourinho said at his pre-match press conference previewing Tuesday’s visit of West Ham.

“I have to say I respect a lot people like him and because I respect him a lot, I want to be nice in my answer. I don’t think he’s ready for a bad answer so I try to be nice and say something that people can think a little bit.

“First of all Harry played his first game for six months.

“The record of goals that Harry has for me is easy for me. Go to your data and it’s easy to see how many matches he played with me and how many goals he scored before his injury.

“I had a few strikers that played for me and they’re not bad. I have a guy called (Didier) Drogba, he played for me (for) four seasons.* Drogba scored 73 goals in 186 games for Chelsea.

“I had another guy who is also not bad, plays for Juventus now (Ronaldo). He played for me (for) three seasons, he scored 186 goals, which gives an average of 56 goals per season.

“I had another guy who is also not bad, called Karim Benzema. He played for me (for) three seasons, he was not always starting because he was quite young at the time, he scored 78 goals in three seasons, which gives a 26-goal average per season.

“I had another called (Diego) Milito, he played one season, he scored 30 goals, won three titles.

“I had another guy, he played for one-and-a-half seasons, in the other half he had a big injury. A tall guy called Zlatan (Ibrahimovic). He scored 58 goals, which gives a 29 average per season.

Kane will be again be involved against West Ham as Mourinho has all six of his attacking players available for the first time in his six months in charge.

Lucas Moura has recovered from a knock while Dele Alli has served his one-match ban and they join Kane, Eric Lamela, Son Heung-min and Steven Bergwijn in the squad.

“Only good news. Lucas is back from injury, Dele Alli is back from punishment and no injuries coming from the game against United,” Mourinho added.

“We didn’t lose any players and we have two extra players and that makes our squad really, really good. It is the first time I have all the six attacking players for the game.

“I can have people playing, people on the bench, rotate the players.”

Bergwijn scored Spurs’ goal on Friday against United, with a fine piece of powerful play and he has made a big impact since joining from PSV in January.

But Mourinho has admitted the winger was not his first choice in the transfer market.

“Congratulations to my club, the way they did it,” he said. “Initially, and I’m always very honest on this, he wasn’t my first option when we decided to make a movement in the winter.

“But in the end, a great decision. A player with a great future, can play on the right and the left.

“We’re more than happy, not just his age, but also his professional attitude. The way he trains, the way he lives. He’s the kind of kid that can only be better.”

Spurs have extended the contracts of Jan Vertonghen and Michel Vorm until the end of the season.

Both men were due to leave the club on June 30 but will now stay for the remaining eight games.

“It’s very important of course. Now we’re focused on this period that will end at the end of July,” Mourinho added.

“Let’s see what happens after that but after that (there) will be a few days holidays or preparation for the new season.

“But now, for the next month, we needed to make sure Jan and Michel were available for us. That shows their commitment to the club and also to the group.

“That’s very good news for us because we need everybody until the end.”

Taxi drivers on strike in Nicosia and Limassol