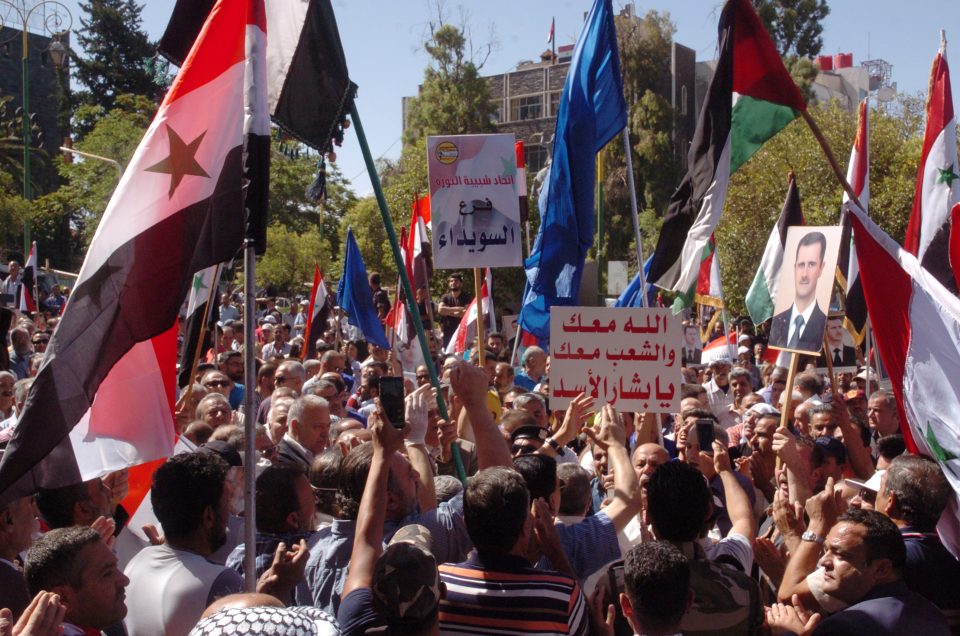 Supporters of Syria's President Bashar al-Assad carry his pictures and flags during a demonstration in the mainly Druze city of Sweida, Syria in this handout released by SANA on June 10, 2020. SANA/Handout via REUTERS ATTENTION EDITORS - THIS IMAGE WAS PROVIDED BY A THIRD PARTY. REUTERS IS UNABLE TO INDEPENDENTLY VERIFY THIS IMAGE

Syrian air defences responded to Israeli strikes on the airspace of the southeastern part of the country near the city of Sweida and in the eastern province of Deir al Zor bordering Iraq, state television said on Tuesday.

It did not give any details about the latest Israeli strikes, one of dozens that Israel had launched in recent months against suspected Iranian targets that are spread across Syria.

Regional intelligence sources say that Israel’s strikes on Syria are part of a shadow war approved by Washington and part of the anti-Iran policy that has undermined in the last two years Iran’s extensive military power without triggering a major increase in hostilities.

Israel has acknowledged conducting many raids inside Syria since the start of the civil war in 2011 where it sees Iran’s presence as a strategic threat.

Israeli defence officials have said in recent weeks that their country would step up its campaign against Iran in Syria where with the help of its proxy militias Tehran has expanded it’s presence.

State doctors slam Okypy for imposing penalties on them