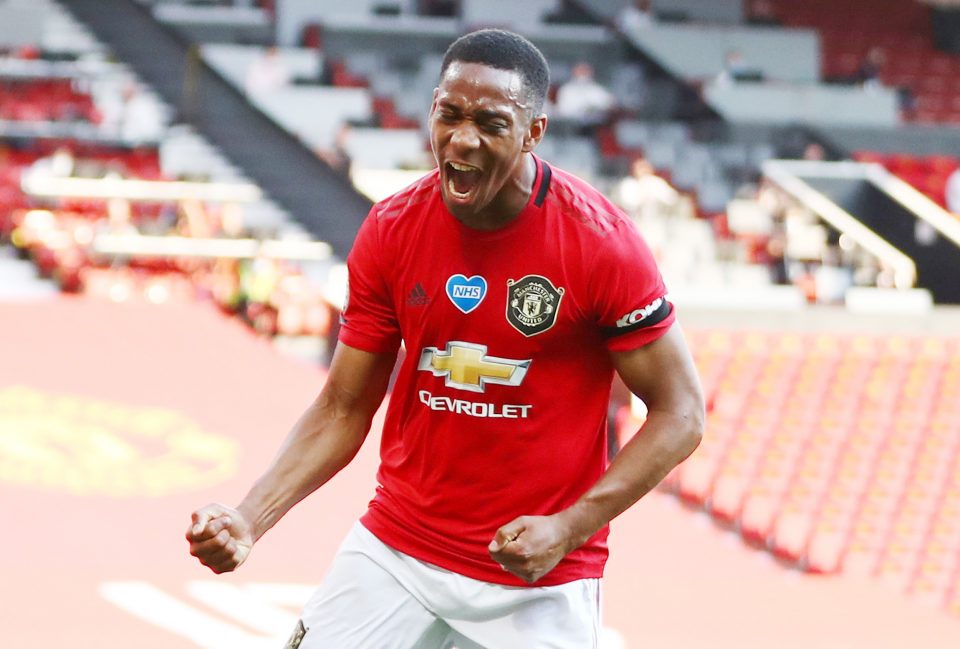 Anthony Martial’s hat-trick inspired Manchester United to a 3-0 Premier League win over Sheffield United on Wednesday and maintained their hopes of a top-four finish.

The French forward scored two similar goals in the opening half at Old Trafford, firing United into a seventh-minute lead when he reacted instinctively with his weaker left foot after good work by Marcus Rashford on the right flank.

After Rashford and Bruno Fernandes went close as United dominated, Martial made it 2-0 in the 44th minute when he steered home a low Aaron Wan-Bissaka cross amid more static defending by the visitors.

Mason Greenwood’s deflected shot sailed inches wide of the post before Martial capped a fine performance with a superb finish, dinking the ball over goalkeeper Simon Moore from another Rashford assist to register United’s first Premier League hat-trick since 2013.

The hosts missed several chances to add to their tally as substitute Odion Ighalo was denied by Moore and the lively Wan-Bissaka dragged his shot from 10 metres wide of the far post.

United stayed fifth in the standings on 49 points from 31 games, two behind fourth-placed Chelsea whose game in hand is a home clash with champions Manchester City on Thursday.

Another episode of the Adama Traore-Raul Jimenez show delivered Wolverhampton Wanderers a precious 1-0 win over struggling Bournemouth in the Premier League on Wednesday.

In an almost carbon copy of Saturday’s opener against West Ham United, Traore’s surging run and inch-perfect cross on the hour was met by Jimenez for his 15th league goal of the season.

Ten of Mexican striker Jimenez’s goals have been assisted by Spanish winger Traore, making them the most lethal combination in the Premier League this season as Wolves continue to press for a Champions League qualification spot.

Victory put them on 49 points in sixth place, the same total as fifth-placed Manchester United who have a better goal difference. Fifth place could possibly offer a Champions League berth this season, pending the outcome of second-placed Manchester City’s appeal against a UEFA ban.

Bournemouth showed more grit than when losing to Crystal Palace in their first game back after the restart, although they created precious little at a sweltering Molineux, failing to manage an attempt on target.

A second-half header by Michael Keane gave Everton a 1-0 away win against bottom side Norwich City in the Premier League on Wednesday, as the Canaries showed little sign of the spark they will need to avoid relegation.

Norwich did pressure the visitors on occasion in the first half, but it took until stoppage time for Lukas Rupp to test Everton keeper Jordan Pickford with a shot on target.

Everton upped the tempo considerably in the second half, taking the lead in the 55th minute when Keane sent a glancing header from a corner flying past Norwich keeper Tim Krul into the net.

Rather than sparking the home side into life, Norwich looked completely rudderless after they went behind, and the closest they went to an equaliser was when substitute Adam Idah forced a late corner.

Everton, whose boss Carlo Ancelotti said they were aiming for European football next season, are 10th on 41 points, four behind seventh-placed Tottenham Hotspur.

Aston Villa substitute Ahmed El Mohamady scored with seven minutes remaining to give his beleaguered side a potential lifeline from relegation as they claimed a vital point in a 1-1 Premier League draw at Newcastle United on Wednesday.

Villa remained in the bottom two but will be buoyed by their fightback at St James’ Park after Dwight Gayle had put the home team in front in the 68th minute.

Newcastle, who beat Sheffield United 3-0 on Sunday in their first game after the COVID-19 lockdown, stayed in 13th place as they advanced to 39 points from 31 games.

Villa have 27 points, having drawn two of three games played in a seven-day spell after the league’s return to action.