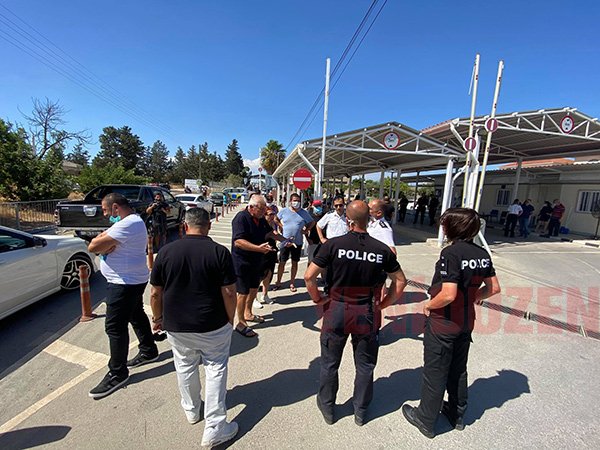 Turkish Cypriot residents of Pyla on Wednesday held a protest at the Pergamos crossing after British bases personnel refused to let a family cross from the north back to the village because the children did not get tested for coronavirus.

According to Turkish Cypriot news portal Yeni Duzen, the family that lives in Pyla crossed to the north but the children did not get tested for coronavirus.

Pyla’s Turkish Cypriot community leader, Veysel Guden, told the news portal that the Turkish Cypriot ‘health ministry’ had agreed that children under 12 do not need to get tested.

When the family tried to return to Pyla, through the Pergamos crossing which is run by the British bases, they were not allowed to cross because the children had no certificates, stirring protests from Pyla’s Turkish Cypriot residents.

According to the media report, Turkish Cypriot mothers from Pyla held a protest at the crossing forcing authorities to close it, thus preventing access to Turkish Cypriot workers who needed to cross to the south.

The Greek Cypriot side allows crossings between the two sides only if people present a negative coronavirus test not older than 72 hours each time they cross. The Turkish Cypriot side asks for a test certificate only the first time someone crosses.

A bases spokesperson told the Cyprus Mail they are aware of the incident.

“We are advising anyone wishing to use the Pergamos crossing point into the north that they will need to present a negative coronavirus test certificate to return to the south,” the spokesperson said.

“We continue to liaise with authorities as the situation develops,” he said.

He added that the bases are in step with the measures in place by the Republic of Cyprus. Anyone wishing to cross without the test certificate is subject to enforcement action, he said.

Other Turkish Cypriot media report that leader Mustafa Akinci has launched contacts with the bases police and the British High Commission to help resolve the matter as regards testing for children under 12.

The Turkish Cypriot Pyla residents said they would continue the protest on Thursday if they are not allowed to cross between the two sides with their children.

Cyprus Hotel Association says ‘we have no guests!’