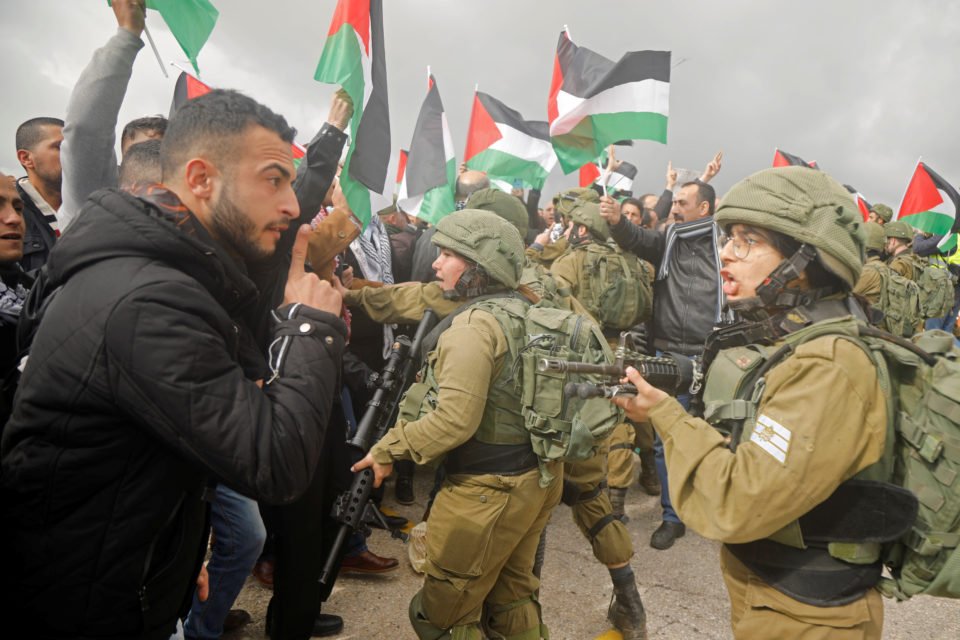 A Palestinian demonstrator argues with Israeli forces during a protest

Vineyard owner Haidar al-Zahar recalls with joy the day in 2005 when Israel removed its settlers and troops from the Gaza Strip, part of a withdrawal that few Palestinians thought they would ever see.

“I felt like a prisoner who suddenly found himself a free man,” he said.

A decade and a half later he is on the warpath as Israel considers whether to annex its Jewish settlements in the occupied West Bank – 40 km (25 miles) away from Gaza – which Palestinians seek as the heartland of a future state.

Prime Minister Benjamin Netanyahu has set July 1 for the start of cabinet discussions on annexing parts of the West Bank, where more than 420,000 settlers live, citing Israel’s security needs, and religious and historic ties to the land.

“Israel today has all the power. No one can deny that – they can do whatever they want,” Zahar, 68, said in the Gaza Strip, which is ruled by the Islamist group Hamas.

He urged Palestinians to wage “armed resistance” to prevent annexation, claiming that Israel evacuated its troops and 8,500 settlers from Gaza a decade and a half ago in part because of Palestinian attacks.

“Without willing martyrs, nothing will change,” he said.

Hamas’s armed wing echoed that call for confrontation on Thursday, calling annexation “a declaration of war against our Palestinian people”.

“We will make the enemy bite its fingers in regret for such a sinful decision,” said Abu Ubaida, spokesman of the Izz el-Deen al-Qassam Brigades.

Israel captured Gaza and the West Bank, along with East Jerusalem, in a 1967 war. It unilaterally withdrew its settlers and troops from Gaza in 2005, saying it wanted to improve its security and international status in the absence of peace talks.

However it enforces a blockade on Gaza, and restricts the movement of people and goods, citing security concerns about Hamas and other Palestinian militant groups there.

On Thursday the United Nations Middle East envoy Nickolay Mladenov reiterated the U.N.’s position that annexing parts of the West Bank would be “against international law” – which Israel disputes.

But he urged Palestinian leaders not to “stray away from the path of peace” and highlighted the dangers if Palestinians were left feeling there was no prospect of a peaceful resolution to the conflict.

“That only creates opportunities for radicals or people with more destructive agendas to come in and fill that vacuum,” Mladenov said in Jerusalem.

“Another explosion, another war that would happen here would be a terrible, terrible tragedy. Not just a human tragedy but a failure of leadership on all sides,” he told journalists.

However, in the southern Gaza district of Rafah, Mohammad Seidam, 84, said West Bank Palestinians should not give up hope. “In Gaza they had built gardens, farms and greenhouses and God removed them,” he said.