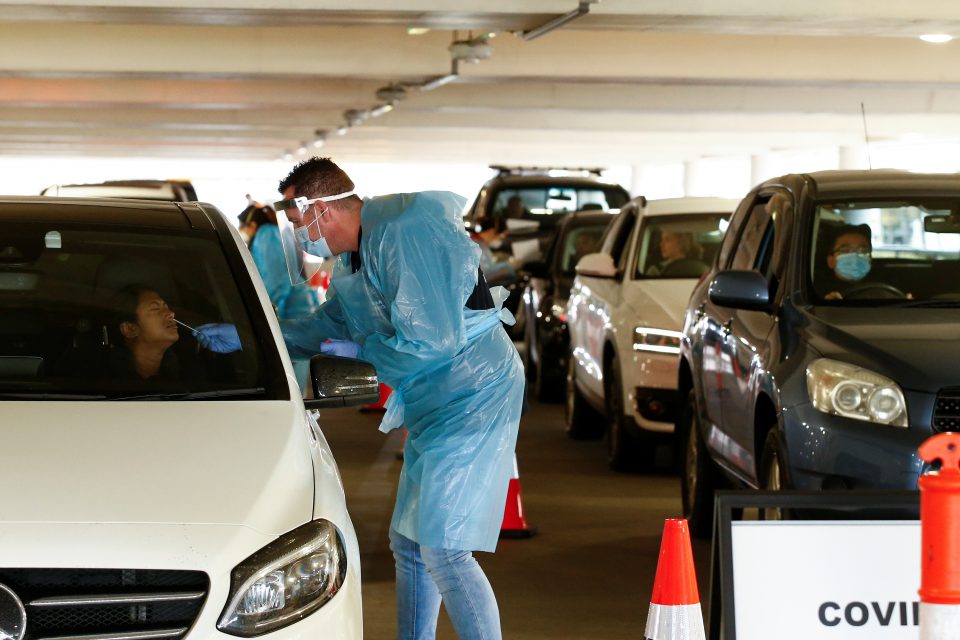 A coronavirus disease (COVID-19) drive-through testing facility is seen as the state of Victoria experiences an outbreak of cases, in Melbourne, 2020. AAP Image/Daniel Pockett

Australia‘s second most populous state deployed ambulances and mobile test centres in a coronavirus testing blitz as the country recorded the biggest daily rise in cases in two months.

Victoria state said 33 people tested positive for coronavirus in the past 24 hours, marking nine days of double digit new cases in the state. It has around 200 current cases out of a country total of 270.

Desperate to contain the outbreak, Victoria state Premier Daniel Andrews said authorities are beginning a testing blitz across the 10 most effected suburbs.

“We have ambulances and other vans that will literally be at the end of people’s streets,” Andrews told reporters in Melbourne.

“We will see these (case) numbers go up in coming days.”

Victoria’s efforts to contain the virus will be supplemented by about 1,000 Australian military personnel who are expected to arrive on Friday, Minister for Defence Linda Reynolds said.

The bulk of the troops will assist with the mandatory 14-day quarantine of anyone who arrives in Australia, though Reynolds said about 150 personnel will also help the state’s testing programme.

Alarmed by the rise in new infections, thousands of people have flocked to testing centres, while Australia‘s two biggest retail chains, Woolworths Group and Coles, have imposed fresh limits on how much customers can buy for specific goods amid a spate of panic buying.

Australia‘s death toll from COVID-19 was on Thursday revised up after tests showed an 85-year-old man who died in April had contracted the virus.

Australia now has recorded 104 deaths from just over 7,500 infections.

Prime Minister Scott Morrison said Australia has safeguards in place to prevent the virus growing beyond the control of authorities, as he insisted states and territories must continue to reopen large swathes of the economy.

Australia has committed to removing the bulk of social distancing restrictions by the end of July, but each state will determine when and how easing takes place.

Regular domestic travel is expected to begin within weeks, while sporting stadiums will from July 1 allow up to 10,000 fans to attend.

The reopening of Australia‘s states and territories has stirred hopes its economy can avoid a prolonged trough, though it is on course for its first recession in nearly 30 years.

The IMF, however, cautioned that Australia‘s A$250 billion ($171.6 billion) stimulus package, including subsidising the wages of 3.5 million people, will need to be carefully withdrawn.

Morrison has said the wage subsidy scheme will end in September, though other targeted stimulus packages could be added, such as a A$250 million package for Australia‘s arts sector announced on Thursday.