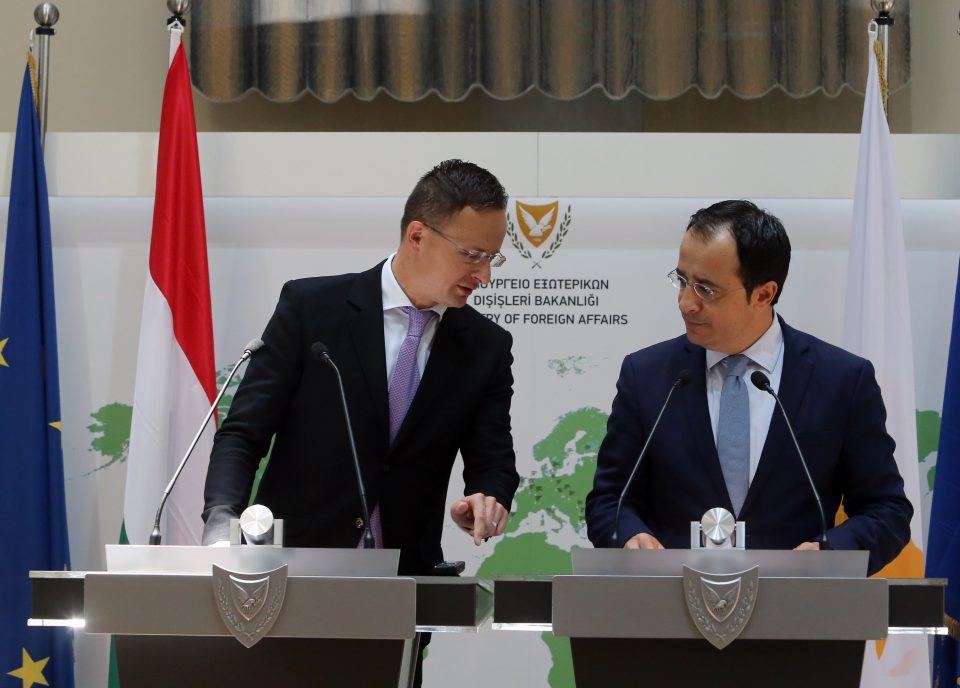 President Nicos Anastasiades met with Hungarian Foreign Minister Peter Szijjarto on Friday, to discuss dealing with the Covid-19 pandemic, tourism relations between the two countries, and other bilateral issues.

Szijjarto also met with the Deputy Minister for Tourism Savvas Perdios at the presidential palace, and then met his Cypriot counterpart Nicos Christodoulides.

Speaking after a meeting between Christodoulides and Szijjarto, the Cypriot foreign minister said he briefed his Hungarian counterpart on Turkey’s escalating provocations and illegal activities in Cyprus’ maritime zones.

They also discussed cooperation in the tourism sector.  Christodoulides said both countries were able to lift travel restrictions as they both had satisfactory epidemiological results.

“Within this context, we both welcome the recent decision by a major European airline based in Hungary to station three of its aircraft in Cyprus as a very positive development, that also helps to bring Cyprus and Hungary even closer together,” Christodoulides said, referring to Wizz Air.

He added there have been seven flights a week between the two countries, and that he agreed with Szijjarto to visit Budapest in September with a business delegation for a bilateral business forum.

Commenting on business relations between the two countries, Szijjarto said the Hungarian Import-Export Bank (Eximbank) has opened a credit line worth €120 million to ease cooperation between Cypriot and Hungarian businesses.

Hungary is currently on Cyprus’ category A list for entry.

As of June 20, people flying from Category A countries face no restrictions when traveling to Cyprus but people traveling from Category B countries are required to have a PCR test done at the source country 72 hours prior to travel. The PCR test certificate is requested prior to aircraft boarding and should also be displayed at border control at the destination.

“To give you the full picture, I will only add that during 2019 we have registered an increase of 76 per cent in asylum applications received compared with 2018,” he said.

On migration, Szijjarto said Budapest was concerned the pandemic would cause a new wave of migration towards Europe.

He added Hungary would continue to keep a hardline stance on migration.

“We reject all attempts for the legalisation of illegal migration,” he said, adding there must be a change to Brussels’ migration policies, and he accused non-governmental organisations of cooperating with traffickers.

Commenting on the EU renewing the Cotonou Agreement, which is an overarching framework for EU relations with African, Caribbean and Pacific (ACP) countries aimed at eradicating poverty, he said Budapest was against its renewal as it legalises routes for migration.

The two ministers also discussed ongoing negotiations for the next multiannual financial framework and the recovery fund from the EU to combat the impact of the pandemic.

They also focused on EU relations with the United Kingdom post-Brexit and the conference on the future of Europe, which was announced at the end of 2019.

“On both these issues, I think I can say that we share the opinion that it is vitally important for us collectively to safeguard EU unity and to keep our citizens’ welfare, prosperity and interests at the very centre of all our decisions,” Christodoulides said.