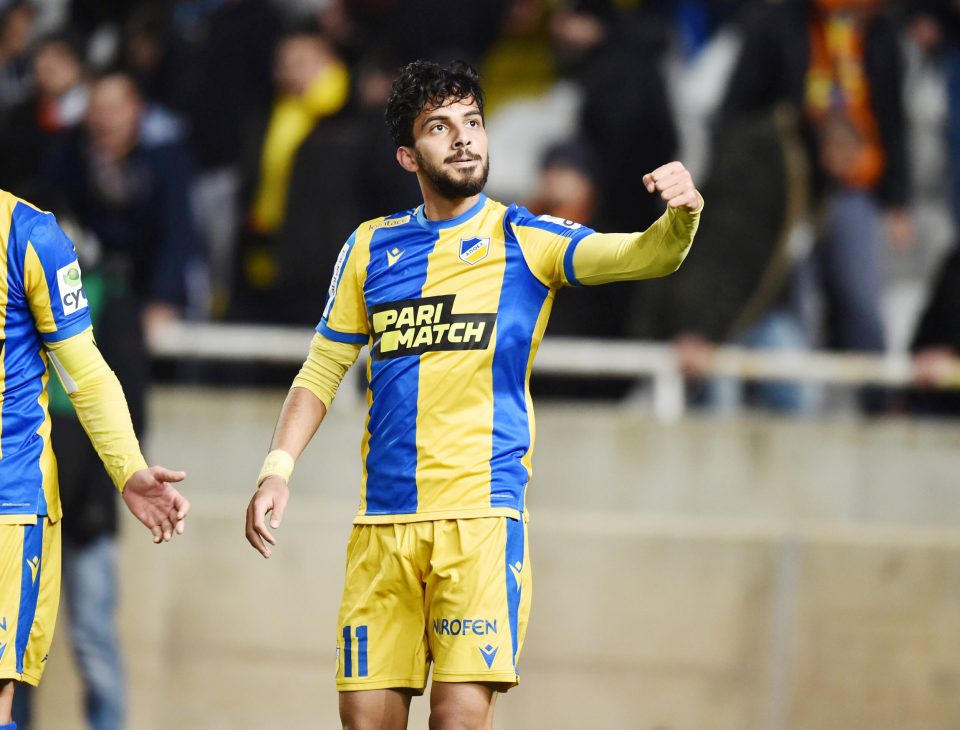 “He’s a nice guy – he’s a kid, basically. He looks very unassuming but when we were playing in the Champions League and Europa League qualifiers before I came home, he was tearing teams apart.” These are the words Tommy Oar used to describe APOEL Nicosia’s Musa Al-Taamari during an interview with Australian newspaper The Sydney Morning Herald.

Oar and Al-Taamari only played and trained together for a few months but the Australian midfielder had seen enough to be impressed. “It’s only a matter of time until a big team snaps him up. There’s already, every week a new team that’s going to sign him”, Oar added in the same interview.

Indeed, the Jordanian former Division 1 MVP has been linked to a number of clubs during the past two years. In November of 2018, it was reported that Cagliari were tracking him. In March of 2019 he was linked to AS Roma for a mooted 3 million euro fee, a fairly low figure all things considered.

By contrast, in 2018, APOEL moved to discredit a story claiming that they were in negotiations with Fiorentina for a fee of 20 million euros. Again in 2019, the player was scouted by Athens club Olympiacos.

Rumours have been incessant. Bleacher Report has published claims that Liverpool, Manchester City, Borussia Dortmund, Atalanta and Lille have all looked at the player at one point or another. No one knows what the accuracy of these claims are but the interest in Al-Taamari is hard to deny.

All of this begs the question: who does APOEL replace Al-Taamari when he inevitably moves on to another European side? To answer this question, we must first look at the player himself and what he offers to APOEL.

Al-Taamari’s profile as a left-footed right winger provides a general direction as to the attributes we can look at. Dribbling numbers are the key category here, but not the only one I’ve looked at.

Based on the above, I’ve created a rough template and searched for players who fit the criteria. This includes the following rules: no player over 25 years so as to retain any potential resale value, no player with a market value of over 3,000,000 so as to allow APOEL to invest a portion of any potential incoming fee into Al-Taamari’s replacement, and no player with fewer than 1500 minutes this season across all competitions so as to have a representative sample.

Further, I’ve looked at players who play in a similar position but who have comparable stats in key categories, seeing as players can be positionally flexible or retrained to learn a new position. 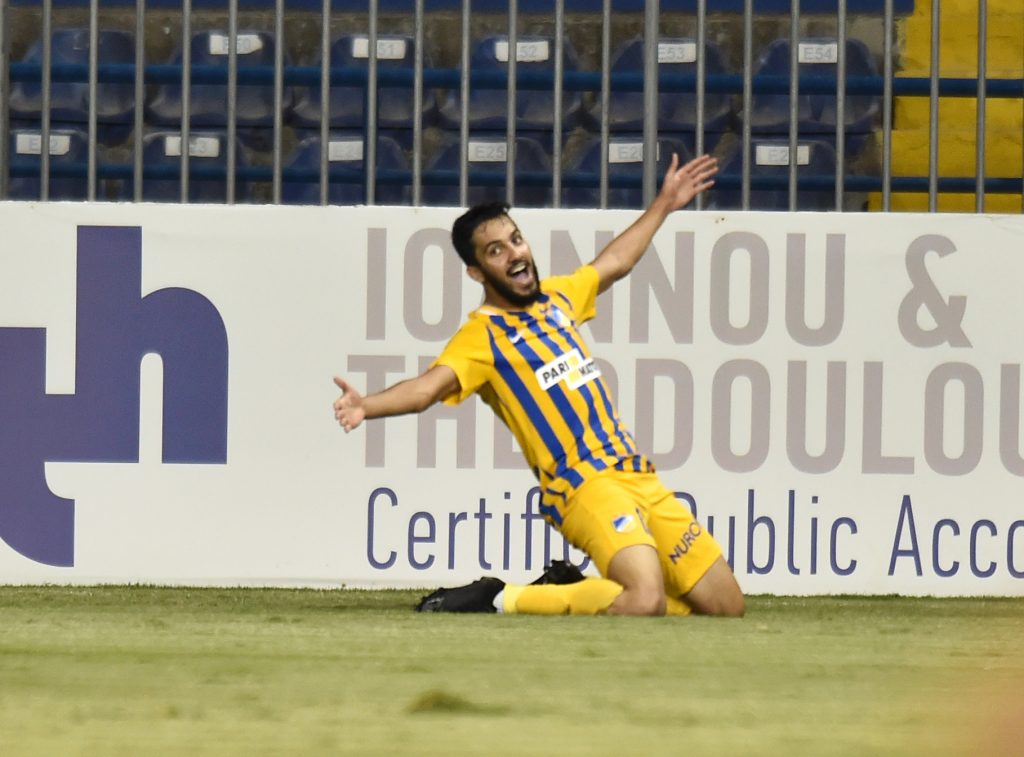 Let’s look at some of Al-Taamari’s key figures before delving into the scouting results. His 11.44 dribbles per 90 minutes is one of the highest in the league for wingers with any real playing time, while his 3.91 touches in the box per 90 minutes is only bettered by only three players who don’t play as traditional Centre Forwards (Pittas, Papoullis and Kah).

In addition, while his forward passes per 90 minutes figure of 4.95 is below the league average of 8.02, his forward pass accuracy of 82.56% is the highest in my dataset.

Progressive passes increase the likelihood of an attack resulting in a goal. By advancing play towards more threatening areas, the player can help facilitate shooting opportunities for his team.

What about his shooting? Well, no one can touch the league’s shot volume monster that is Ruben Rayo. However, Al-Taamari’s shots total of 39 is only beaten by four players and three of them are predominantly or exclusively centre forwards: Rayo, Trickovski, Derbyshire and Bautheac. Meanwhile, his 2.24 shots per 90 minutes is respectable and higher than the league average of 1.59 shots per 90 minutes.

The above are just a key sample of the entire dataset but provide a fair indication of Al-Taamari’s strengths. However, for this scouting exercise, I’ve also included some categories where he doesn’t excel for a more fair set of criteria.

So, with the aforementioned 45 values in consideration, how many players have matched with or came close to Al-Taamari from around Europe, South America, Asia and the Middle East? Nine players. If it seems low that’s because of the narrow criteria put in place. This allows us to find players of a specific profile.

These are the players my scouting exercise has unearthed: 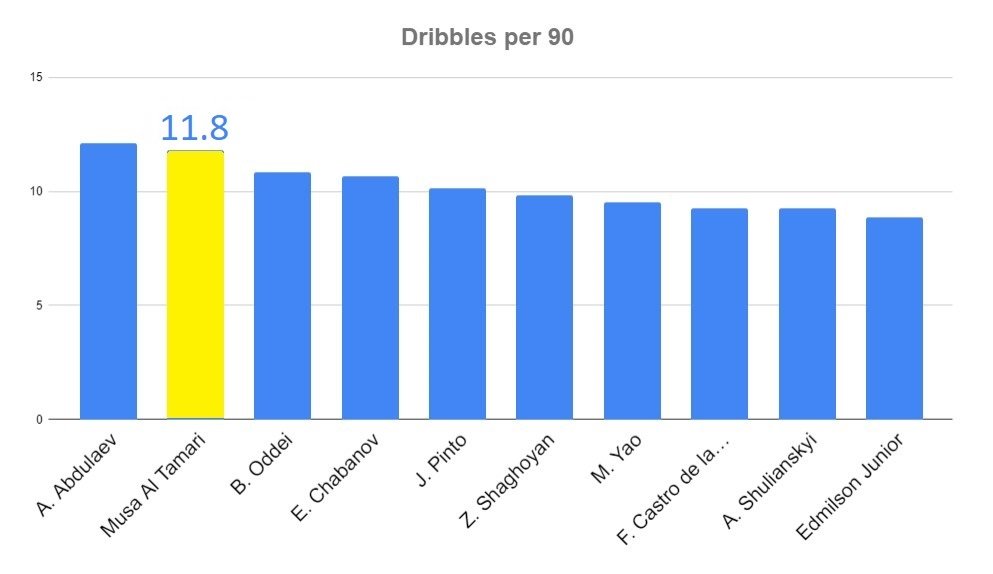 Al-Taamari has the second highest rate of dribbles per 90 minutes amongst the group with 11.8 dribbles. Abdulaev has the highest figure with 12.12 dribbles. 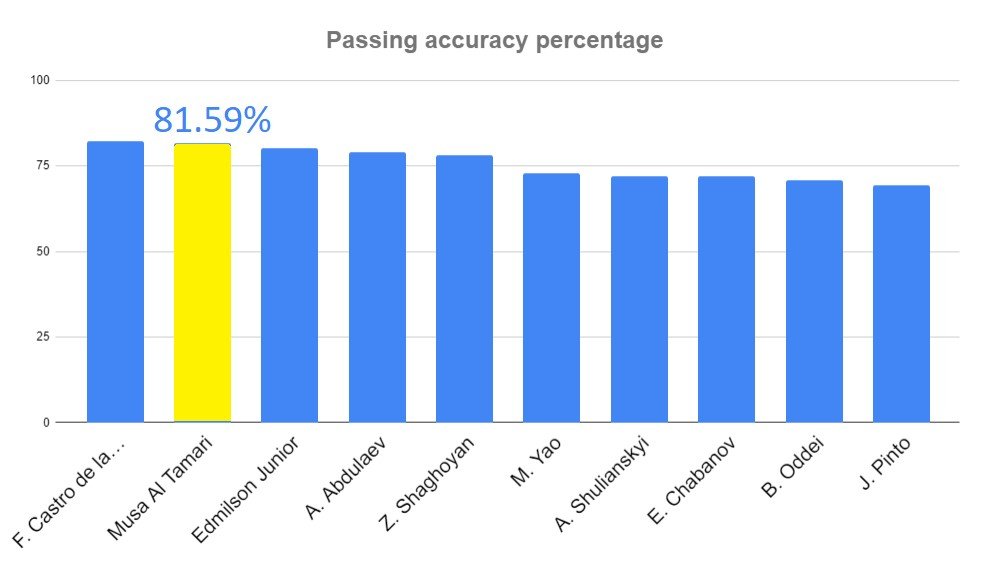 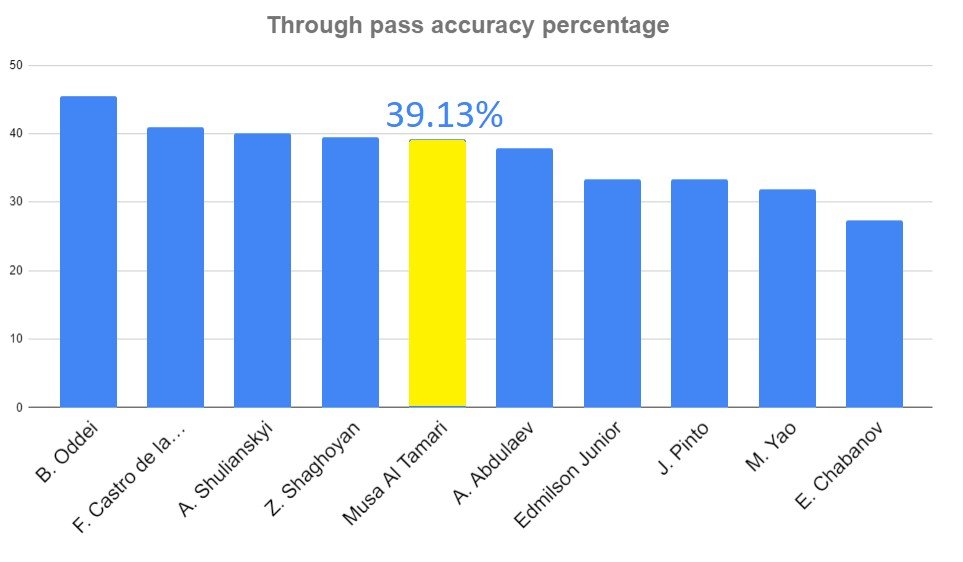 Sassuolo’s Oddei stands out in terms of through pass accuracy but the APOEL player’s figure of 39.13% is in line with the better players here and puts him in 5th place. 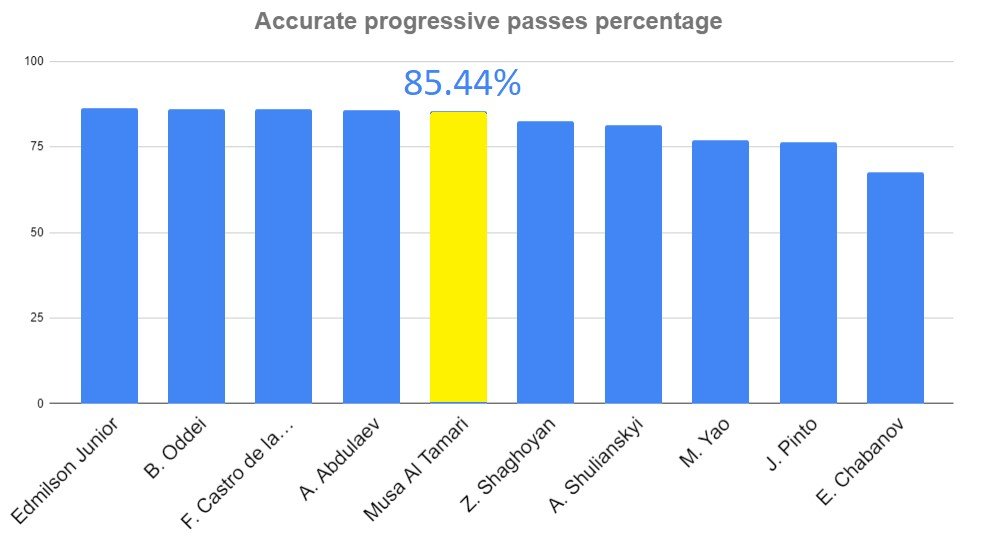 Al-Taamari also finds himself in 5th place in the accurate progressive passes percentage category with 85.44% but the top 6 here are quite close to each other. He is 6th in terms of crossing accuracy percentage, however, with a figure of 35.42%. 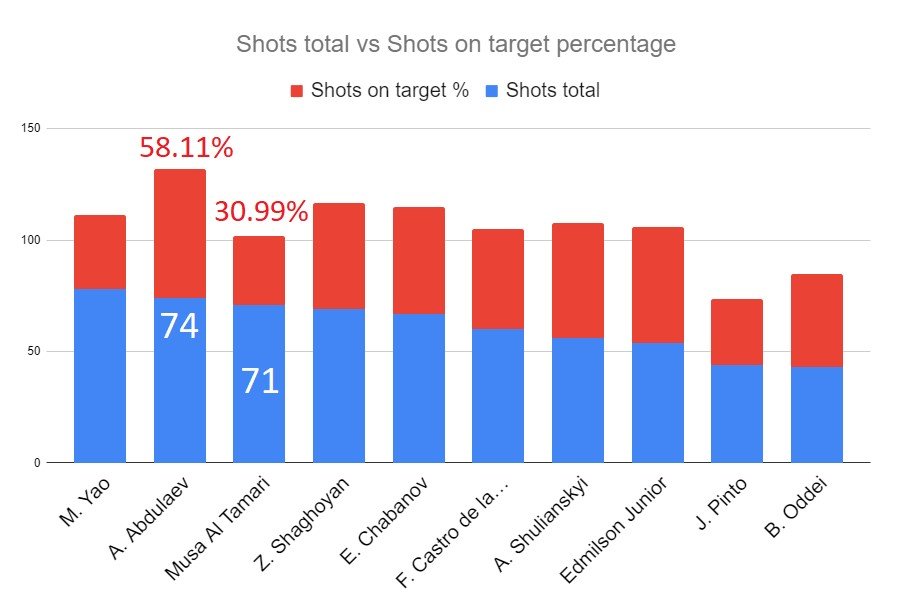 Finally, in the shooting categories, he has some improving to do next season. His shot volume (71) is quite high which makes up for some loss in accuracy (30.99%), but Abdulaev’s similar shot volume (74) comes with almost twice the accuracy percentage (58.11%).

Of course, no amount of research can replace thorough scouting, both in terms of deeper statistical analysis, as well as watching the players in real games and in different circumstances. However, the above provides an interesting launchpad for APOEL and their future efforts to replace the Jordanian winger. Perhaps not in terms of the players mentioned, but the methodology employed.

Al-Taamari’s current contract is set to expire in the summer of 2021, meaning APOEL would have to sell him this summer or scramble to renew his contract before the January transfer window when the player would be free to speak with other clubs.

However, there have been rumours that the club is trying to renew the player’s contract to 2023. It won’t be an easy task but it would be the most prudent thing for APOEL who would at least be safeguarding or increasing any fee for the player, even if he is sold this summer.