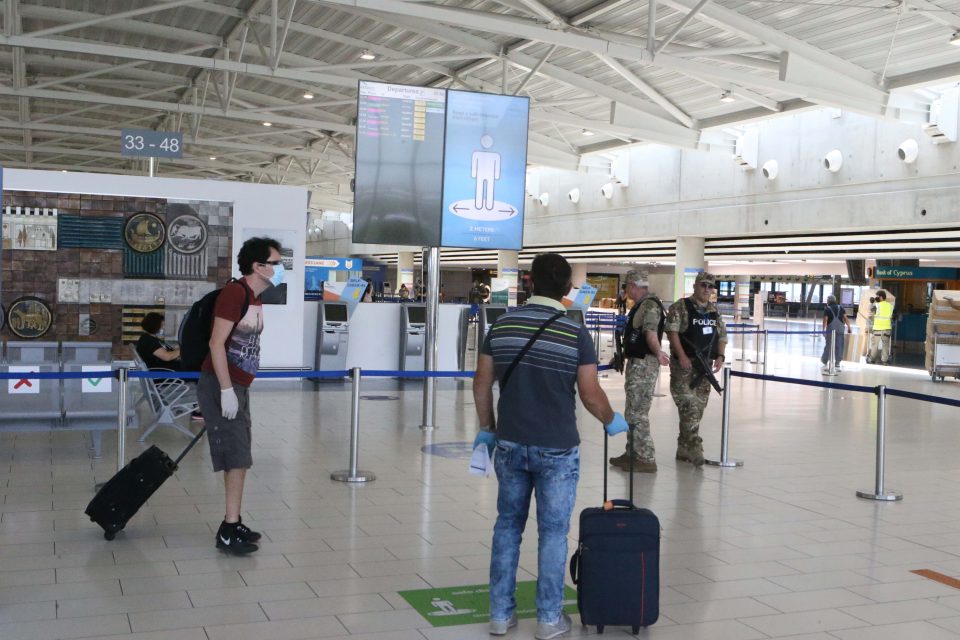 On entry into the Larnaca Airport on Thursday night at 8.30pm, a young Hermes woman sitting behind a cardboard stall, politely told me to put a protective mask on, informing that this is the rule. Everyone inside the airport must wear a mask, she said. I could have sworn the three cops I saw on entering, before I reached the cardboard stall were not wearing masks. They were armed, however, their guns presumably offering them protection from the virus.

What I entered was not Larnaca Airport in late June, but a sprawling, spotlessly clean, empty space in which you could hear a pin drop. All check-in desks were abandoned as there was only one flight still to depart that evening – Wizz Air to Luton. The flight information board was a sorry sight.

There were two Wizz Air check in desks open, the staff patiently waiting for someone to come and drop off a bag. The person who served me seemed genuinely pleased to have something to do. She also informed that before leaving I would have to log in to the British government website to fill in a form online, giving details about where I would stay, mobile phone number and a host of other details related to my stay. This was necessary to be allowed entry.

Never before has it been so easy and fast to get through passport control and security. You did not even have to scan your passport at those pointless machines that print a copy of it which the police put in their drawer when you present it to them.

“How do you know I am the man in the picture in the passport with half my face hidden behind the mask,” I asked the immigration officer. Robbers in cowboy movies just tied a hanky over their face to avoid detection and this was what we were doing with the face mask. “You have a point, but you do not have to take it off, I know it is you in the passport,” he said with a smile.

The ‘department store’ area selling perfumes, creams, sunglasses, alcohol, tobacco and the like were all closed off with advertising boards, promoting the products you couldn’t buy because there is nobody there but you could still see all the products on display above the boards. There were two small stations open, one offering a few items such as water, chocolates, crisps and sandwiches and another selling cosmetics and perfumes with a 40 per cent discount to emphasise that things are desperate and a very long way away from returning to normal at Larnaca Airport.

Everything else was closed, including the smoking areas. I suppose you could not smoke because you would have to take your mask off, which was not permitted. The airport announcement system kept reminding the use of a protective mask is mandatory in the airport, followed a few minutes later by the more positive message, aimed at lifting our spirits. “The airport ventilation system uses solely fresh air.” Not that anyone cared or could tell they were breathing fresh air, wearing the mandatory protective mask that smelt of the recycled air of a restaurant basement.

I arrived at about 8.30pm for the 9.55pm Wizz Air flight. There were two flights to Greece before our departure and when they had gone, the entire departure lounge had just the 30 passengers flying to Luton.

It was like driving through the empty streets of Nicosia at height of the lockdown, a period I felt deeply nostalgic for the other day stuck in a traffic jam at 9.30 in the morning. I genuinely longed for those days when I could drive to work in five minutes, see half a dozen cars on the way and feel like I owned the roads.

On Thursday night I felt like I owned Larnaca Airport, with the added bonus of the ventilation system using fresh air. It was exactly the same feeling at Luton Airport when we arrived just after 1am on Friday. No queues, no waiting, no stress. There were officers checking you had filled in the Border Control form online, but this took all of 20 seconds. And by the time you reached the baggage claim area, your suitcase was already waiting for you. Air travel has never been as easy as in the post coronavirus period.

Businesses, after the crisis, say it’s like starting all over again

Wills and inheritance under Cyprus law