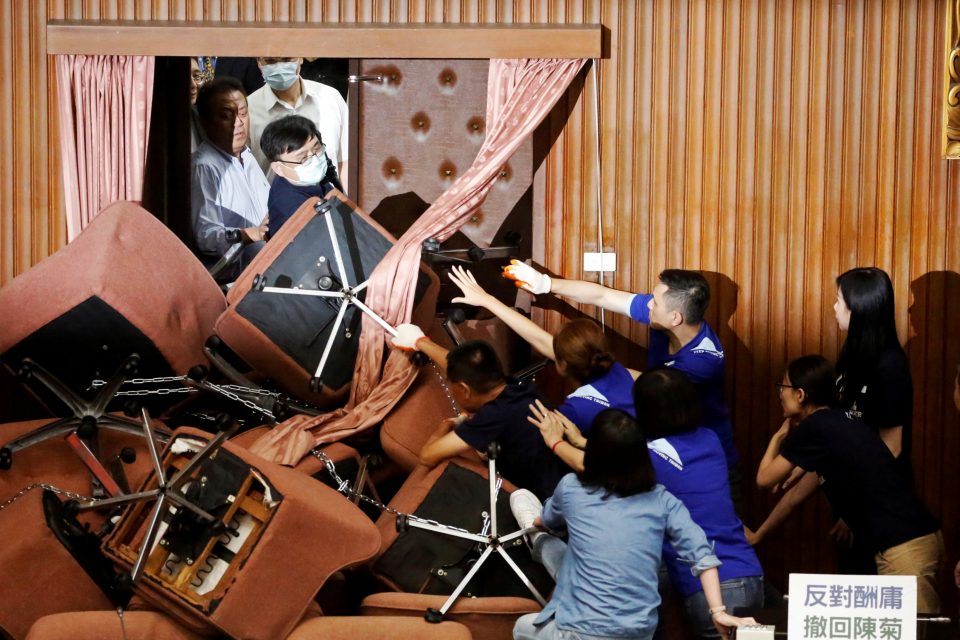 Fighting erupted in Taiwan’s parliament on Monday as lawmakers from the ruling Democratic Progressive Party (DPP) broke through barricades erected by the main opposition Kuomintang (KMT) who had occupied it to protest against government “tyranny”.

Taiwan is a rambunctious democracy and fights and protests inside the parliament building are not uncommon.

More than 20 KMT lawmakers occupied the legislature overnight on Monday, blocking entry to the main chamber with chains and chairs, saying the government was trying to force through legislation and demanding the president withdraw the nomination of a close aide to a high-level watchdog.

Late morning on Monday, DPP lawmakers pulled down the barricades and forced their way in, surrounding the main podium where their KMT opposite numbers had holed up.

There were scuffles and shouting as the KMT, including its youthful new chairman Johnny Chiang, struggled to hold their position.

The KMT lawmakers eventually withdrew, but denounced their DPP counterparts for using violence against them.

Wayne Chiang is not related to the party chairman.

The KMT, trounced in January’s parliamentary and presidential elections, began their protest in parliament on Sunday afternoon. The party traditionally favours close ties with China, which claims Taiwan as its own territory.

The KMT said it was protesting the DPP and President Tsai Ing-wen’s forcing though bills and Tsai’s nomination of her senior aide Chen Chu to head the Control Yuan, an independent government watchdog, calling Tsai’s government “more tyrannical than before”.

The DPP has a large parliamentary majority, and has been angered by the targeting of Chen, who was jailed in 1980 for helping lead pro-democracy demonstrations against the then-KMT government when Taiwan was a dictatorship.

“What a nerve!” senior DPP legislator Wang Ting-yu wrote on his Facebook page.

Both the DPP and the presidential office condemned the KMT’s action, with the DPP saying the KMT was orchestrating a “farce”.

The KMT is undergoing a policy revamp to try and win back popular support, but faces an uphill struggle.

Earlier this month the KMT mayor of the major southern city of Kaohsiung lost a recall vote by a huge margin, in another setback for the party.

In 2014, hundreds of students occupied parliament for weeks in protests nicknamed the Sunflower Movement, demanding more transparency and fearful of China’s growing economic and political influence on the island.

Australian state thinking of reimposing restrictions after surge in infections