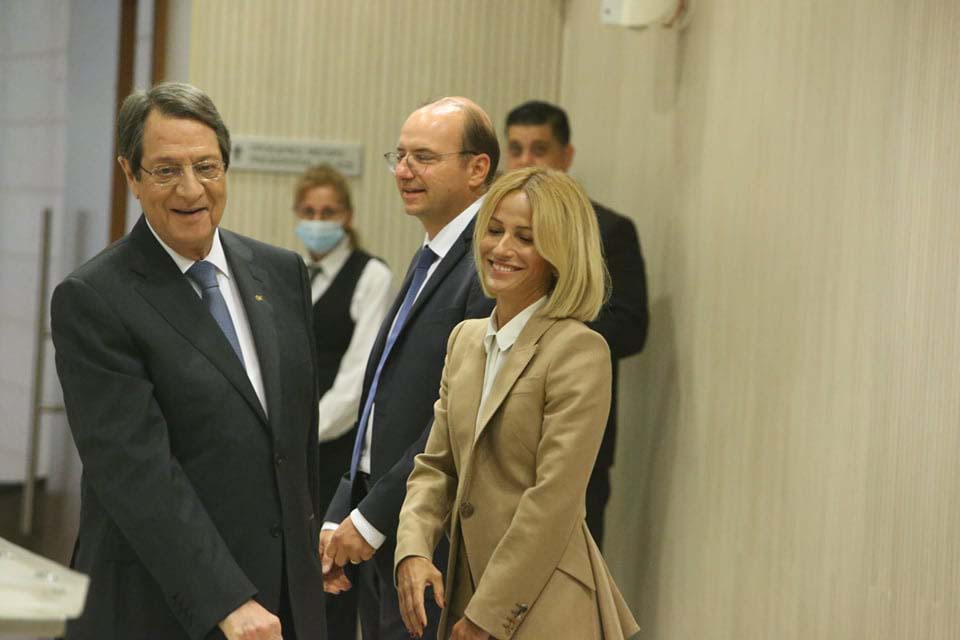 The new ministers for justice and defence, Emily Yiolitis and Charalambos Petrides respectively were sworn in at the presidential palace on Monday morning.

First up was Petrides, followed by Yiolitis – as both swore an oath.

“I officially assure faith and respect for the constitution and laws of the Republic of Cyprus and for the preservation of its independence and territorial integrity, as well as for the complete fulfilment of the duties assigned to me as minister,” he said.

The mini-reshuffle comes at crucial time for the island as tensions with Turkey are ratcheting up and great uncertainty remains in the wake of the pandemic.

For his part, President Nicos Anastasiades gave a short speech which highlighted the importance of the roles assigned to the two new ministers.

He noted Yiolitis’ excellence as a lawyer, and her professionalism and academic achievements which contributed to her appointment as justice minister.

Petrides’ role as defence minister was spoken of in the context of modernising the national guard, having to adapt to meet today’s challenges and in a “decisive moment” in Cyprus’ history.

“My dear Emily, dear Charalambos, you receive this position from ministers who have set a high bar,” Anastasiades said.

The previous ministers succeeded in their “honesty, hard-work, determination, impartiality and always respecting meritocracy.” These will also be the criteria upon which the new minsters are judged, the president said.

The portfolio for the new ministers set out objectives to oversee and fulfil during their time in office.

The president praised the work of previous justice ministers in the modernisation of the legal framework, who set in place reforms.

Petrides has been tasked with, among other things, to upgrade and modernise the national guard in order to shield territorial integrity.

The president praised the work of previous defence ministers, who reduced national service to 14 months and “the successful integration of 3090 professional soldiers” and other reforms.

A third new minister will is also yet to be sworn in. Shipping Minister Natasa Pilides will take the portfolio of energy minister Giorgos Lakkotrypis.

Petrides and Yiolitis had to be sworn in earlier than scheduled after Attorney-general Costas Clerides abruptly resigned on Friday. He is to be replaced by Giorgos Savvides and Savvas Angelides as his deputy who will be sworn in later on Monday. Both men were the predecessors of Petrides and Yiolitis. Savvides and Angelides served as justice and defence ministers respectively.

Yiolitis is only the second woman to be appointed justice minister since the foundation of the Republic in 1960.

During the ministry handover ceremony later, Yiolitis voiced her conviction that all departments and services would be on her side during her tenure, adding that her door would always be open.

“I will get to know you, listen to you, and together we will plan our next steps carefully, decisively and swiftly,” she said. “We can and ought to deliver the rule of law we have promised our fellow citizens. We can and ought to complete the reform of justice.”

Receiving the defence ministry, Petrides said the situation on the ground was well known.

“Our long-standing struggle to ger rid of the occupation is conducted today in an especially fluid geopolitical environment with new escalating provocations,” he said. The minister said he would be in close coordination with the political leadership and Greece.

The British are fatter than the rest of Europe, says PM Johnson