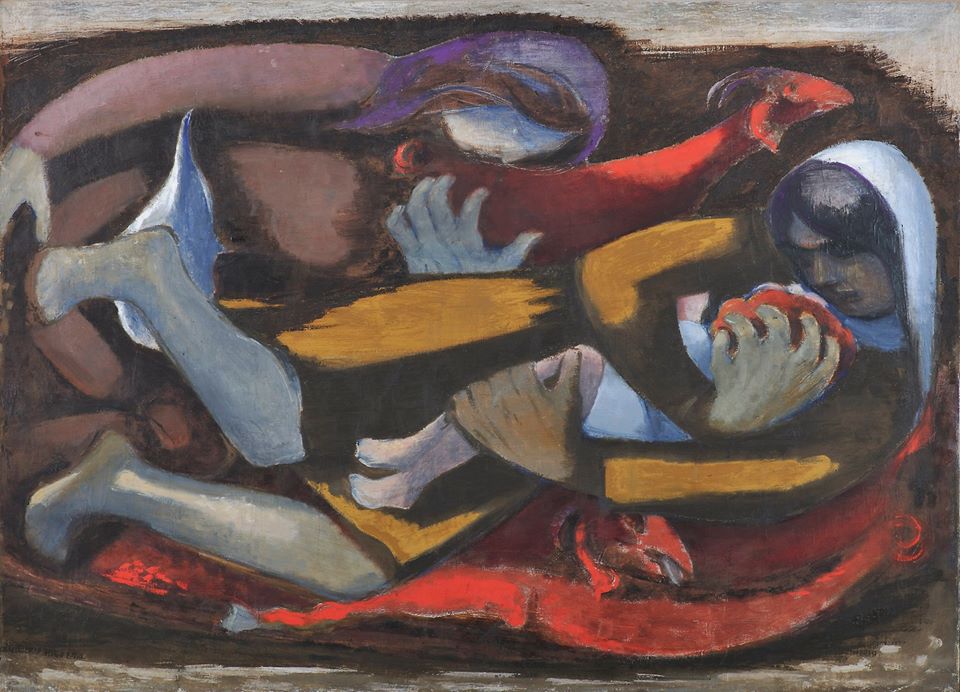 “On a thematic level, it features the same female figures, one of whom is clutching in her arms her small child and the other her kid goat, as they are being swept away by the devastation of a storm, losing their balance and falling, crushed within a hermetic, dark place with no depth and no way out, stifling in its confinement. As in all the works of the series, the source of the threat, the perpetrator, is absent; thus, the interpretations and messages of the painting become broader. Life, symbolically expressed in the faces of the women who perpetuate it and the animals that preserve it, is in danger. The work is a metaphorical and allegorical illustration of violence, destruction, terror and despair and it engenders the same spirit as Picasso’s Guernica.

With this work, Diamantis demonstrated that he was mature enough to combine his past achievements in painting with novel morphoplastic elements, producing a new composition in which he appeared totally rejuvenated. Starting out from schematization and selective abstraction, methods he had acquired from his former painterly idiom, the artist moved on to a more expressive vocabulary, without forsaking the constant values of his painting, such as rhythm and harmony. In this composition, Diamantis completely denied depth and perspective and created a new reality in the foreground, by blending the fi gures with space.”

– Dr. Eleni S. Nikita, From the catalogue of the exhibition “Agonies – Diamantis”

‘Ai-Da: Portrait of the Robot’ at the Design Museum

Avant-garde contrarians: getting to the art of Dadaism