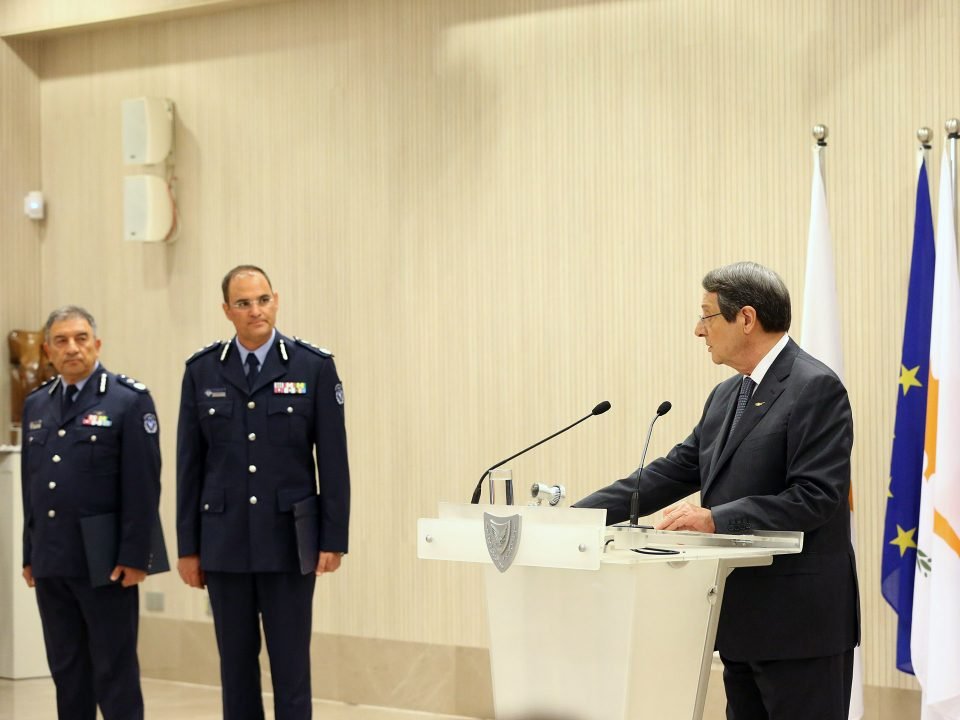 The new police chief, Stelios Papatheodorou, and his deputy, Christos Mavri, were officially sworn in on Tuesday at the palace with a message from the president of “bold decisions and radical reforms” to turn the force into “a modern, flexible and efficient organisation”.

President Nicos Anastasiades addressed both men at a ceremony at the palace, saying: “As you are taking over the two senior positions of the police force today, you are called upon to show full commitment to the constitution and to comply with it.”

Their mission, he said, is to ensure the conditions of order and well-being in society while also defending and guaranteeing the rights of every citizen.

Anastasiades said that in 2019 “we had a decrease in the number of serious crime cases and an increase in the detection rate”.

The president outlined three key goals for Papatheodorou and Mavri, including: restoring the sense of safety for citizens, enhancing trust and credibility of the police force while also improving relations of trust with the citizens.

At the ceremony, Anastasiades also highlighted the context within which the new appointments are being made and gave an overview of some of the major recent changes to the police force.

He made special mention of the “the police reorganisation [which] is underway and includes a modern model of policing and operational framework.”

Other changes include: adapting the criteria for promotion based and salary upgrades based on performance, education and training.

A separate economic crime unit has been set up, with departments allocated to deal with organised crime.

Specialised directorates have been created to counter serious crime, counter-terrorism units as well as a special investigative team for cases relating to the sexual abuse of minors.

One of the more controversial tools with which the police have been equipped is the ability to monitor telephone conversations.

Anastasiades also mentioned that neighbourhood police officers have doubled in urban centres since 2012.

The president added that changes in modern crime were evident such as immigration, organised crime and cybercrime.

The police force was not without some criticism, however, as the president noted that there were and continue to be weaknesses in the operations of the police.

“Undoubtedly, there have been and still are weaknesses… weaknesses that have led me to painful decisions. At the same time, I do not ignore anyone’s positive contribution,” he added.

The president was likely referring to the sacking last year of then police chief Zacharias Chrysostomou in the wake of the serial-killer debacle and following on from the resignation of then Justice Minister Ionas Nicolaou over the same case.

Anastasiades highlighted Michaelides’ 40 years of service – an achievement of which he “performed well can be proud of.”

A date for the start of UK flights would be helpful for tourism, Karayiannis says