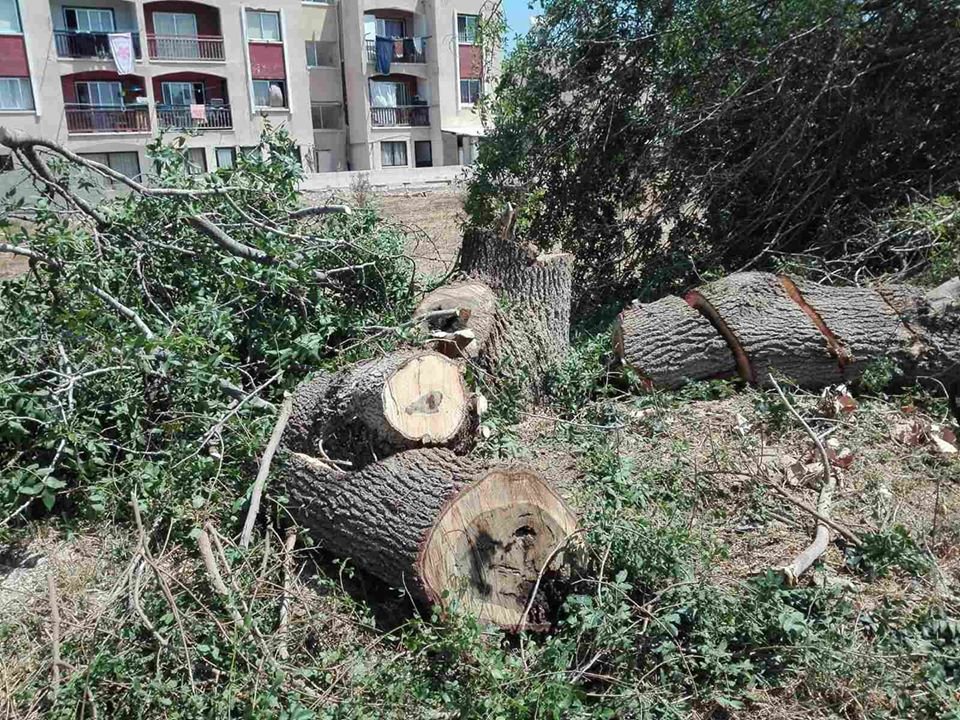 Some of the trees that were cut over the weekend (CNA)

The cutting down of a number of protected trees in Paphos over the weekend has highlighted the urgent need for the town planning, MP Charalambous Theopemptou told the Cyprus Mail on Monday.

“There is no way (literally) that the forestry department would have been notified that trees were to be cut, this is a problem with the current procedure and it needs to be amended to force people to protect the trees,” he said, adding that processes needed to be brought into line to ensure that the environment is protected.

Some of the protected Tremithos trees were cut in Kato Paphos on Saturday before the mayor of Paphos, Phedonas Phedonos, and environmentalists stepped in to halt the actions, albeit temporarily.

“Currently, gaining permission of the forestry department if you are cutting down trees on a plot to build a house for example, is not compulsory. It is up to the individual to present at the department, for example, and say, ‘I have large trees and want a permit to cut them’. No-one does this and we have to find a way to force the town planning to ensure that everyone has to go through the forestry department for clearance,” he said.

After being contacted by Andreas Evlavis of the Paphos Greens, Theopemptou intervened and contacted the head of the forestry department. As it was a weekend and not a workday, he managed to get the work stopped ahead of a site visit, assessment and examining of the licence.

Although the developer does have a licence and has already cut down seven or eight of the 40 to 50 Tremithos trees in the area, Evlavis said that strong intervention must be made to stop the wanton destruction of the environment. No more must be cut, he said. He called the incident one of the biggest environmental crimes in Kato Paphos.

“I visited the site on Saturday after the mayor of Paphos contacted me to see if we could help. It is very important to stop these trees from being cut to make way for a two lane road.”

As the road is narrow, the developer of an adjacent site wants the road widened for two lane traffic, Evlavis pointed out, but he added that the trees could be saved from being felled, if the planning department would visit the site, view the trees and designate the street as one way only.

“Unfortunately, as such actions show, everything in Cyprus is sacrificed on the altar of ‘development’.The trees were cut because of a new development being built, but they are at the side of the road and don’t need to be cut. It is really stupid.”

Before any permits are granted, the procedure must now include a process where all applicants must first obtain forestry department approval before any licences are granted, Theopemptou stressed.

Our View: Fake tweet in justice minister’s name was a disgrace

Consumer confidence increased in May and June