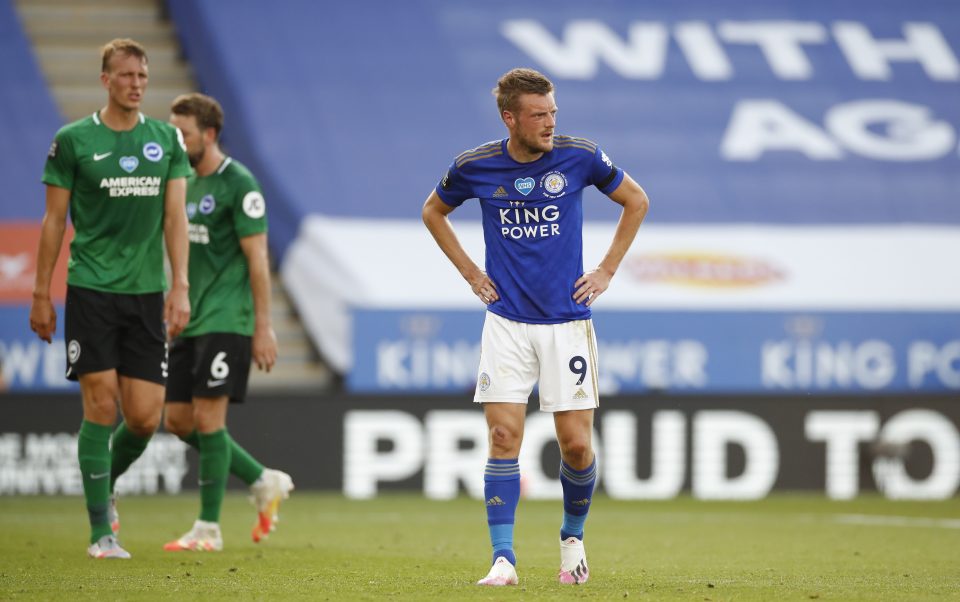 Leicester take on Everton at Goodison Park on Wednesday night, with concerns surrounding the form of striker Jamie Vardy. The former England forward has scored only twice in his last 10 matches for the club

The Premier League is waiting to hear whether Leicester will be able to play at home this weekend or for the foreseeable future after the city was placed under tougher restrictions due to a spike in coronavirus cases.

The Foxes are due to host Crystal Palace at the King Power Stadium on Saturday but it is not yet clear whether, or where, the match will be played.
Non-essential shops were closed from Tuesday after cases in the city accounted for 10 per cent of all nationwide positive tests over the past week.

The planned easing of restrictions on Saturday, such as the reopening of pubs and restaurants, will not take place in the city, with people having been advised against all but essential travel.

Premier League chief executive Richard Masters said the incident highlighted the fragility of the competition’s Project Restart plans, but said contingencies were in place for such an occurrence.

“We have had a huge dialogue with the authorities about the concept of neutral venues,” he told MPs at a Digital, Culture, Media and Sport (DCMS) committee evidence session on Tuesday morning.
“If what is happening in Leicester – we’re waiting to hear – does affect the club’s ability to host home games – either the match on Saturday against Crystal Palace at 3pm – or subsequent matches, then we have the opportunity to put those matches elsewhere or postpone until a date when it is safe to do so.

“I’m yet to understand what the impact of the partial lockdown in Leicester is going to have on the club. But clearly it demonstrates the fragile project that we have on here. We can’t take it for granted.”

Masters said there was a risk of the season not being completed if there were multiple lockdowns like this.

Leicester take on Everton at Goodison Park on Wednesday night, with concerns surrounding the form of striker Jamie Vardy.
The former England forward has scored only twice in his last 10 matches for the club stretching back to Boxing Day, but Leicester boss Brendan Rodgers says others must take responsibility for goalscoring as well.

Leicester remain third in the table but now have just a one-point advantage over Chelsea after frustrating draws against Watford and Brighton since the restart.