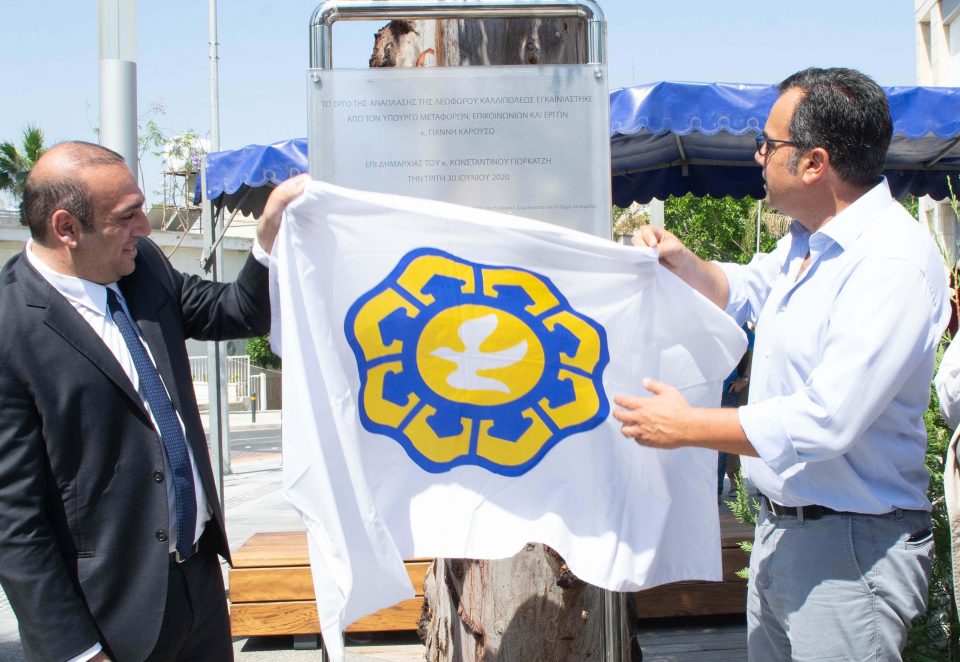 Transport Minister Yiannis Karousos on Tuesday inaugurated the reconstruction of Kallipoleos Avenue, saying that the road now looked much different from what it was in the past.

In his speech at the ceremony, Karousos said the reconstruction was a very important project and part of the Nicosia mobility plan, which will better manage the road network and balance the use of all means of transport.

“Before there was unregulated parking and a lack of infrastructure for pedestrians,” he said.

Funding of €6.5 million was earmarked for the two parts of the project. Eighty-five per cent was paid for from the EU’s Cohesion Fund and 15 per cent from the government and the Nicosia municipality.

The second phase of the broader project, which is expected to start in mid-July, will include turning Makarios Avenue into a one-way street, with two lanes for cars, two for public buses running in each direction and bicycle lanes.

“Its implementation is in line with the strategic objectives of the ministry of transport, communications and works to promote sustainable transportation and improve mobility and road safety in urban areas,” the minister noted.

Talking about Kallipoleos Avenue as it is now, he said a total length of two kilometres of the road and one kilometre of secondary road network was reconstructed, a new irrigation system was constructed, underground utility cables were laid and new pavements were built which allow pedestrians to move around safely and comfortably.

No bicycle lanes were included in the plan despite the large area given over to the new pavements.

About 200 new basins for planting trees have been built on the pavements, new parking spaces have been created and new traffic lights have been installed as well as new vertical and horizontal signage.

In addition, he noted, a new attractive outdoor area for pedestrians and residents of the area has been created at the junction of Ypatias and Kallipoleos streets.

When the plan for the reconstruction of Kallipoleos was announced in December 2017, then transport minister Marios Demetriades said it had been studied extensively with regard to its impact on traffic, and that various alternatives to road-network functionality, drivers’ safety, accessibility, environmental impact and impact on public transportation, pedestrians and cyclists were examined.