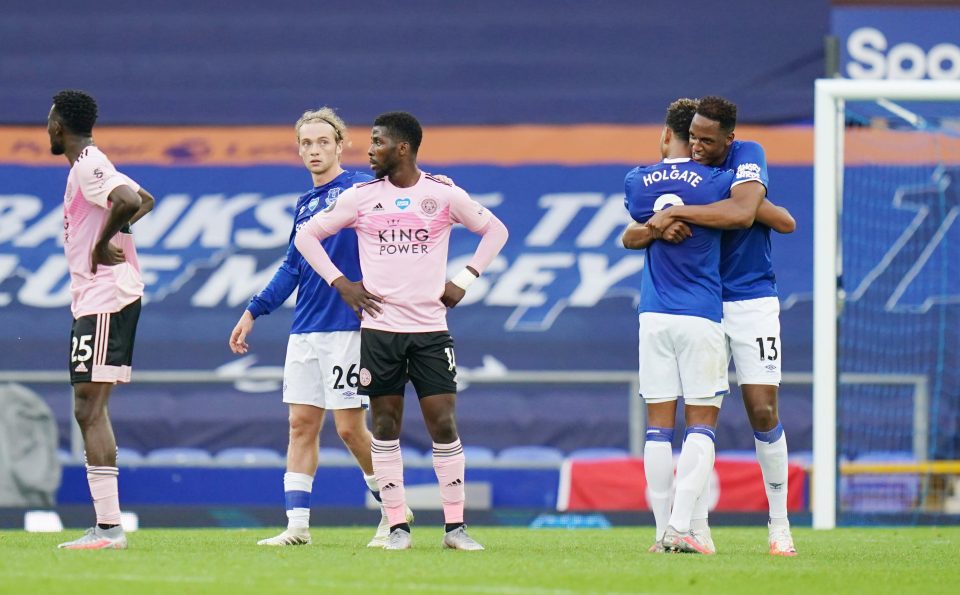 Defeat at Goodison Park is another blow for the Foxes, who exited the FA Cup at the hands of Chelsea at the weekend and now face a real test to hang on to their top-four spot in the table

Third-placed Leicester City’s winless run since the restart of the Premier League season continued with a 2-1 defeat by Everton at Goodison Park on Wednesday.

Everton grabbed the lead in the 10th minute when 19-year-old Anthony Gordon did well on the left, pulling the ball back and into the path of Brazilian Richarlison who slotted home.

Carlo Ancelotti’s side doubled their lead, in controversial circumstances, when Michael Keane and Wilfred Ndidi challenged for a header in the box and after a long VAR review, referee David Coote ruled the Leicester midfielder had handled the ball.

Gylfi Sigurdsson confidently converted from the spot and with his side 2-0 down at the break, Leicester manager Brendan Rodgers made a double change with James Maddison and Kelechi Iheanacho introduced.

The switch had a swift impact with the visitors pulling one back six minutes after the restart, when Jamie Vardy caused panic in the Everton box, Iheanacho sought the loose ball and Mason Holgate’s clearance hit him and flew past Jordan Pickford.

England keeper Pickford then survived a scare when he fumbled a low cross from Marc Albrighton but Keane was alert to clear the ball off the line.
Leicester stayed on 55 points, one more than fourth-placed Chelsea who played West Ham in Wednesday night’s late kick-off.

Elsewhere on Wednesday, a terrible error from goalkeeper Tim Krul gifted Pierre-Emerick Aubameyang his 50th Premier League goal as Arsenal thumped Norwich 4-0 at the Emirates, pushing the Canaries ever closer to relegation.

Krul foolishly attempted to fake a long kick and dribble past the Gabon striker in the 33rd minute, but he nicked the ball off the keeper’s foot and rolled it into the net to reach a half-century of goals in the English top flight.

The Gunners scored a brilliant second four minutes later through Granit Xhaka, and though Norwich started the second half brightly, Aubameyang killed the game off with his second goal in the 67th minute.

Cedric Soares came off the bench to score his first goal for Arsenal in the 81st minute as the London club climbed to seventh place on 47 points. Norwich remained bottom on 21 points, with six games left.

Bournemouth’s hopes of avoiding relegation meanwhile suffered another blow after their poor form continued with a crushing 4-1 home defeat to Newcastle on Wednesday.
The result left the Cherries, who have taken one point from their last seven league games, 19th on 27 points from 32 games, while Newcastle moved up to 13th on 42 points after stretching their unbeaten run to five games.

Allan Saint-Maximin shone with three assists as he gave his markers a torrid evening, feeding Dwight Gayle for a fifth-minute opener after he took advantage of a defensive blunder by Bournemouth.

The Frenchman dazzled his way past Adam Smith in the 30th and squared the ball back to Sean Longstaff, who buried a first-time shot into the roof of the net before limping off with a hamstring injury to make way for Miguel Almiron.

The Paraguayan made it 3-0 in the 57th minute with a superb shot from the edge of the penalty area, having burst through the middle of Bournemouth’s porous defence after Saint-Maximin caused more damage on the left flank.

Second-half substitute Valentino Lazaro added the fourth with a deft finish from inside the penalty area before Dan Gosling netted a stoppage-time consolation for the home side.