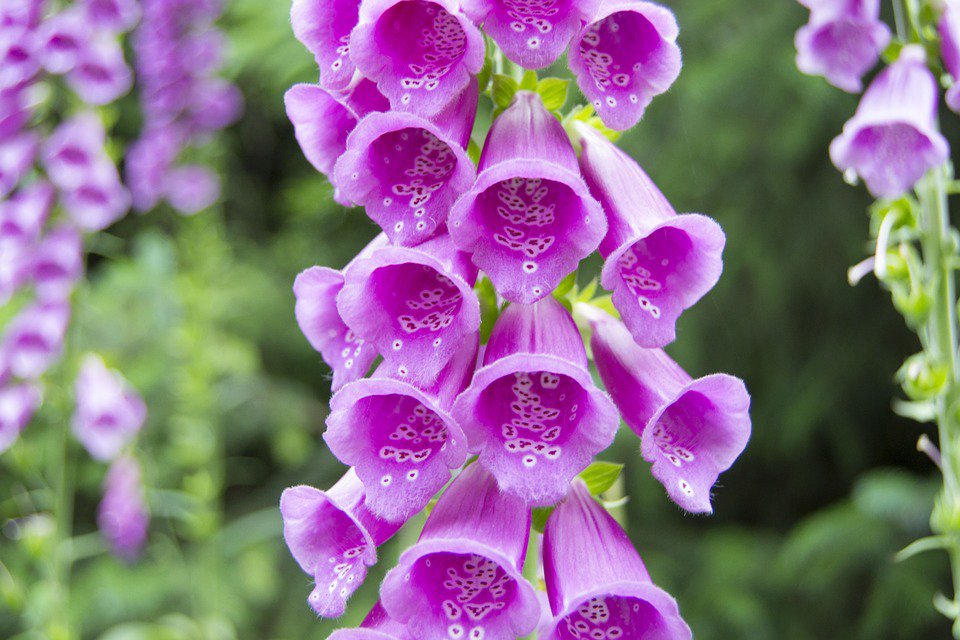 Habitat: An annual, sometime biennial, member of the Scrophulariaceae family growing up to 1.5m in loamy soil in woodlands in temperate European countries. In the first year it produces a basal rosette of spear-shaped leaves that transform into tall, erect, hairy stems – with broader deeply wrinkled leaves – that terminate in spikes of graded purple tubular flowers that mature from the base upward; the flowers are speckled on the inside. The seeds form after the flower decays. All parts of the plant are poisonous.

What does it do: Foxglove is an excellent example of scientific observation of common folk-lore practice resulting in the discovery of a life enhancing chemical compounds. The German and French herbalists had known of the properties of the leaves in external applications and it appears in the 16th century herbal of Fuchs as an application for topical tumours. Nicholas Culpeper, physician to Charles I, and publisher of The English Physician Enlarged claimed the plant ‘was specific for The King’s Evil (Scrofulous) and a cure for a scabby head’ (Skullcap).

Well known among the village wise women, it didn’t come to prominence until Dr William Withering published his Account of the Foxglove in 1785 in which he recorded his observations of over 200 cases of dropsy (Oedema) that had been treated by country herbalists using Foxglove. The leaves of the plant contain a number of cardiac glycosides, saponins, organic acids, tannins and mucilage. The glycosides, among them digitoxin and gitoxin, are isolated to make important cardiac medicines used to stimulate and regulate the heart. The leaves are potent diuretics, that although not directly affecting the kidneys, improve oxygen/blood circulation thereby improving their general condition by flushing excess fluids from the system.

Djgitalis was recommended as a popular antidote for aconite poisoning.