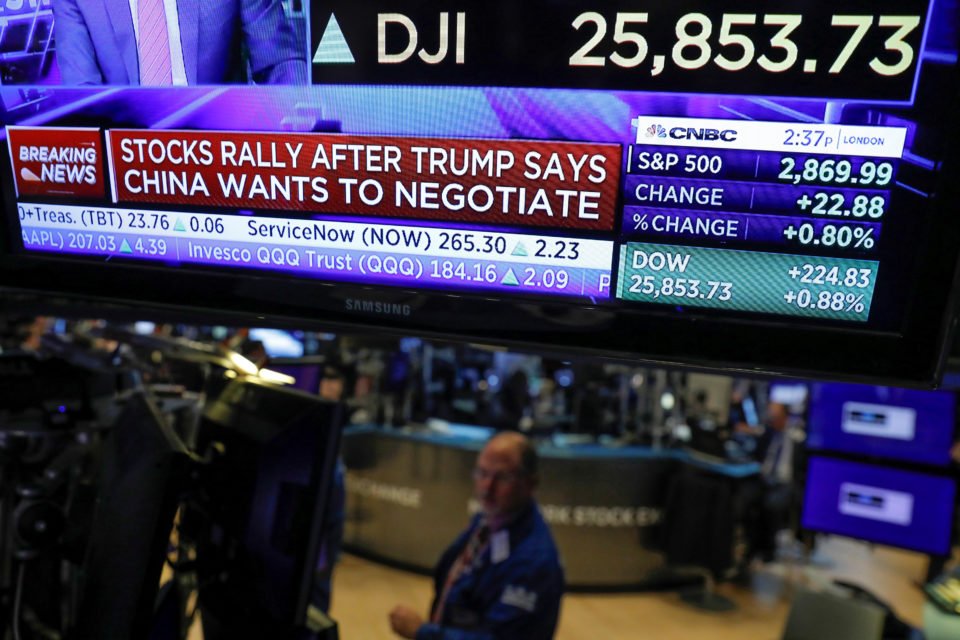 A screen on the trading floor at the New York Stock Exchange (NYSE) displays news of stocks rallying after a statement by U.S. President Donald Trump regarding China trade deal in New York

Asian stocks tracked Wall Street higher on Thursday although sentiment was cautious ahead of U.S. employment data while copper prices jumped to more than six-month highs on a better global outlook and supply fears in top producer Chile.

MSCI’s broadest index of Asia Pacific shares outside of Japan rose 0.9 per cent with all major indexes trading higher on hopes of a vaccine for COVID-19, which has killed more than half a million people globally and shut down the world economy.

U.S. employment figures due later in the day are expected to show if the world’s largest economy can sustain its fragile recovery as new COVID-19 cases accelerate in several southern states.

Economists polled by Reuters expect private employers to show 2.9 new million new jobs June, which would follow a surprise increase in May. Casting some doubt over that projection, however, was a smaller-than-expected increase in jobs seen in the ADP report on Wednesday.

“A better-than-expected outcome could go some way to settling the near-term debate that the U.S. labor market will heal relatively quickly and justify new highs in U.S. equities,” said Stephen Innes, strategist at AxiCorp.

Wall Street ended Wednesday higher after key economic indicators showed a rebound in Chinese manufacturing activity as it recovers from the pandemic while sharp declines in European factory activity eased.

Risk sentiment was whetted by a COVID-19 vaccine from Pfizer and Germany’s BioNTech, which was found to be well tolerated in early-stage human trials.

Those developments have raised concerns about China’s already strained relations with its major western trading partners, particularly the United States.

The U.S. House of Representatives passed legislation on Wednesday that would penalize banks doing business with Chinese officials who implement a national security law.

Meanwhile in Chile, where the number of COVID-19 cases have been climbing, miner BHP said it would begin to slow production at its small Cerro Colorado copper mine in the country.

Elsewhere, oil prices eased and gold was a tad softer too while the dollar was steady in a sign of investor caution despite encouraging macro data.

The safehaven greenback was unchanged against the Japanese yen at 107.45. The euro barely moved too and was last at $1.1254 while sterling was treading water at $1.2477.