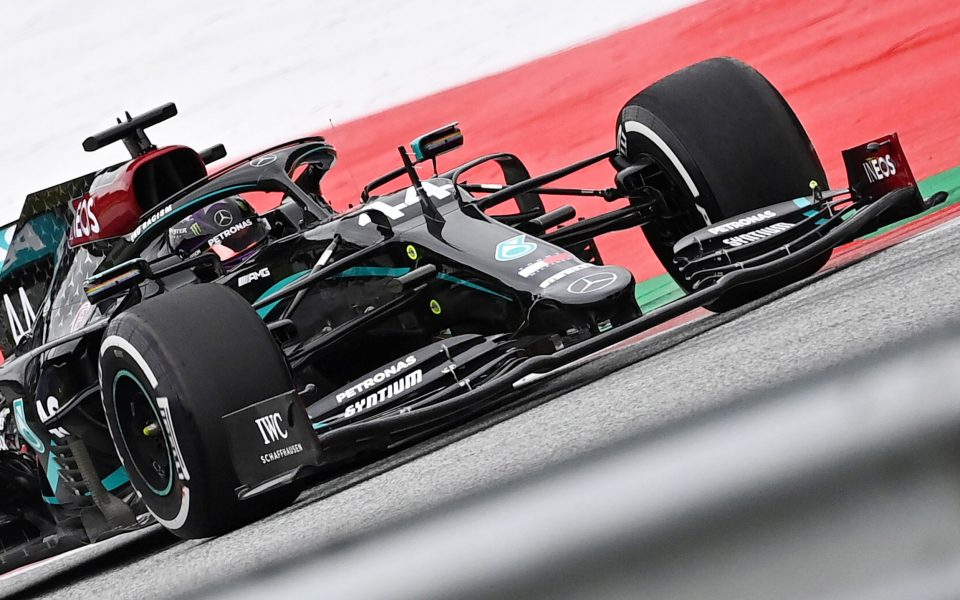 Mercedes' Lewis Hamilton during practice, as F1 resumes following the outbreak of the coronavirus disease (COVID-19)

Formula One got back on track in changed circumstances on Friday but with Mercedes bringing a familiar look to the timing sheets as six times world champion Lewis Hamilton led team mate Valtteri Bottas one-two in Austrian Grand Prix free practice.

The Briton did 41 laps and lapped with a best time of one minute 04.816 seconds in a damp and overcast session, 0.356 faster than the Finn.

Red Bull’s Max Verstappen, winner of the last two races at his team’s home track, was third fastest and 0.602 off Hamilton’s pace.

McLaren’s Carlos Sainz, who is heading to Ferrari at the end of the season, was first on track and finished the session fourth.

Ferrari, who have recognised problems with their car but have to wait for updates, had Charles Leclerc 10th and Sebastian Vettel, celebrating his 33rd birthday, 12th.

Sunday’s race, the first of two in Austria on successive weekends, will be the latest start to a championship after the COVID-19 pandemic forced the cancellation of the scheduled Australian opener on March 15 before a wheel had turned.

Friday marked the first time all the drivers had been on track together since the end of pre-season testing in Barcelona last February.

The last time any of them raced was in Abu Dhabi in December last year.

“It’s good to hear the engines and see cars again and almost get back to some phase of normality,” Red Bull team boss Christian Horner told Sky F1 television.

“We all look like we’re in some kind of hospital programme, with all the face masks and the PPE (personal protective equipment)… but other than that working practices are very much as normal.

“This is day one of the season so it’s a little bit odd coming here halfway through the year.”

The race is being run under strict health and safety conditions, with teams operating in ‘bubbles’ and isolated from each other in a paddock, with drivers wearing face masks even when talking to the media by video link.

The race will be run completely without spectators for the first time in Formula One history.

“We are all used to a lot of fans in the campsites, grandstands… but the most important thing is we are finally back on track and can put up a good show,” said McLaren principal Andreas Seidl on a Zoom call.

McLaren triggered the abandonment of the Australian race in Melbourne after an employee tested positive for the new coronavirus.

Seidl said the entire team had a clean bill of health after the latest round of tests.