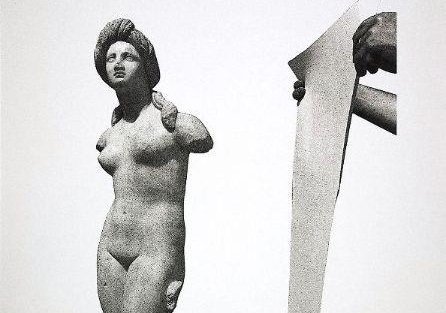 Among the dozens of events and activities that were put on hold during the lockdown is an art exhibition by Theopisti Stylianou-Lambert, Associate Professor of Photography and Museum Studies at the Cyprus University of Technology and the group leader of Museum Lab at the research centre RISE. Titled arte-facts, the exhibition has returned to Point Centre for Contemporary Art where it will remain until July 17.

The project looks into the relationship Cypriots have with archaeology. Many houses in Cyprus own modern copies of ancient Greek and Roman statues. While ‘original’ statues are exhibited as museum objects on pedestals or behind glass cases both in Cyprus and abroad, these real-size copies step down from their pedestals and live an everyday life. They become domestic objects, often exposed to various weather conditions placed alongside plants and other everyday objects.

The series focuses on one of these statues often found in gardens, the statue of Aphrodite of Soli, a marble statue from the 1st century BC found by a farmer while ploughing his field, and now exhibited at the Cyprus Museum in Nicosia.

Arte-facts includes mainly photographic works, silkscreens and a virtual reality (VR) experience. An artist’s book which completes the series of works will also be launched during the exhibition. The book, apart from the photographs, includes short texts from the following academics, curators and artists.

Apart from the exhibition, guided tours by the artist will take place on Wednesday July 8 and 15 at 7pm.