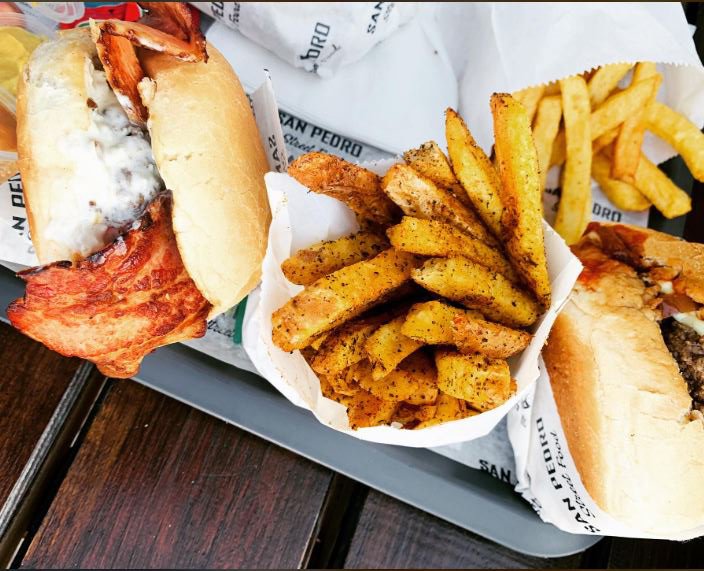 It has most definitely been a very strange few months. Being stuck at home with nowhere to go was definitely a shock to the system for most of us. Thankfully, we are now coming to a point where we can resume some kind of normality, and go out to eat even if new measures mean it is not the same experience as it was pre-lockdown.

The first place I chose to go was San Pedro Street food in Larnaca because when all restaurants were made to close it made a public announcement via social media it would give away perishable stock to whoever needed food.

I had previously been told about the cool artwork and décor at San Pedro and when I arrived was surprised at how big it is! I suppose the ‘street food’ label threw me a little.

Walking in, you are immediately faced with a large blackboard menu listing everything that is available. San Pedro cater for those who don’t eat much to the biggest eater out there! Their burgers come in four different sizes! Each burger is 125g. You can have a single, double, triple or 500g burger! San Pedro haven’t forgotten about the vegetarians and vegans either, offering a Portobello mushroom burger and Beyond burger varieties.

There was a bit of a wait to get served due to the restrictions that are in place but when it came to my turn the server behind the counter was extremely polite, friendly and helpful.

I ordered a double Jack Daniels burger with a side of creole fries – topped with a mixture of herbs and spices. I’m not really a big spice fan so was a bit hesitant about ordering them but was assured that they wouldn’t be too hot.

San Pedro even managed to get the music right. It was there in the background but not too loud. Just the right volume to be able to enjoy both the music and conversation with friends.

One thing I also noticed while waiting for my burger was the relentless queue of people lining up, itself testament to San Pedro. A lot of people were also coming to pick up take away.

When I finally got my burger and opened it up, it looked huge! I could just about bite in to it! They had also manged to get the right balance of cheese to patty as well. It wasn’t oozing excessively out the side, nor was it hiding out of sight. I’ve had Jack Daniels sauce at other restaurants and sometimes found it a little sweet but here it definitely was not. The caramelised onions were done to perfection too! The burger itself hit the sweet spot between pink and dry and overdone. San Pedro also know the burger isn’t just about the meat! So many times I’ve had a tasty burger only for it to be ruined by a disintegrating bun. Despite the sauce and the size of the burger, this one held firm and was enjoyable right down to the last bite.

As promised, the creole fries were not too spicy. They were a welcome change from regular fries. San Pedro also offer sweet potato fries, cheese and bacon fries and other sides such as coleslaw and onion rings.

While eating I couldn’t help but notice the new graffiti that had been painted on to the walls during lockdown. It is phenomenal. There is a theme of Marvel superheroes with the likes of Spiderman and the Hulk with a sprinkling of legends such as Freddie Mercury. You’d never think of putting the two together but it somehow worked!

Sadly, you may now have to wait to go and sit at San Pedro as they have recently made the decision to close the dining area and offer only a take away so that they can improve the service to customers during this time. I’m going to make a bold statement and say that San Pedro is definitely up there with some of the best burgers I have had. If you’ve not been, you’re missing out.