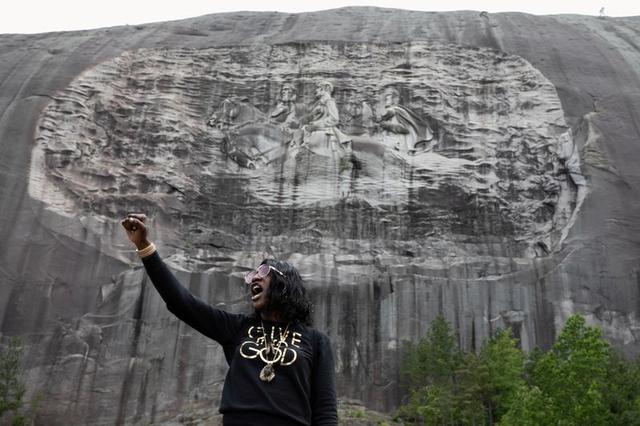 Stone Mountain Confederate Memorial, a nine-story-high bas-relief sculpture carved into a sprawling rock face northeast of Atlanta, is perhaps the South’s most audacious monument to its pro-slavery legacy still intact.

Despite long-standing demands for the removal of what many consider a shrine to racism, the giant depiction of three Confederate heroes on horseback still towers ominously over the Georgia countryside, protected by state law.

The monument – which reopens on Independence Day weekend after the COVID-19 pandemic forced it to close for weeks – has faced renewed calls for removal since the May 25 killing of George Floyd, a Black man who died during an arrest by a white police officer who pinned his neck to the ground with a knee.

The brutality of Floyd’s death, captured on cellphone video, triggered a national outcry against racial injustice, and revived a long-simmering battle between those demanding the removal of racist symbols from the public sphere, and those who believe monuments honor the tradition and history of the South.

“Here we are in Atlanta, the birthplace of the Civil Rights Movement and still we have the largest Confederate monument in the world,” said Gerald Griggs, a vice president of the Atlanta chapter of the NAACP civil rights group, which staged a march last week calling for the carving to be scraped from the mountainside. “It’s time for our state to get on the right side of history.”

The sheer scale of the monument makes its removal a daunting task to contemplate. Longer than a 100-yard American football field, it features the likenesses of Jefferson Davis, the president of the 11-state Confederacy, and two of its legendary military leaders, Robert E. Lee and Thomas “Stonewall” Jackson, notched in a relief 400 feet above ground.

The Sons of Confederate Veterans is an organization that staunchly defends Stone Mountain and other Confederate statues and emblems. Dedicated to teaching the “Southern Cause,” according to its website, it believes their removal is akin to purging American history.

The Southern or “Lost Cause of the Confederacy” holds that the war was fought over a heroic, but lost, effort to defend states’ rights to secede from the Union in the face of Northern aggression, rather than the preservation of slavery.

Martin O’Toole, an official of the Georgia chapter, said the monument is not a totem of racism at all. It’s history, plain and simple, he says.

Maurice J. Hobson, an associate professor of African American Studies at Georgia State University, counters this, describing the Southern Cause as “a false history” that downplays slavery’s role in the Civil War.

He said the Confederate leaders were traitors to the United States who fought to hold onto a Southern economy that depended on slavery.

All three men featured on the monument, Davis, Lee and Jackson, were slave owners.

“The whole of Stone Mountain was erected to show what some white Georgians revered,” he said.

Stone Mountain has long held symbolism for white supremacists. The Ku Klux Klan, a hate group that was formed by Confederate Army veterans and has a history of lynchings and terror against Black people, held its rebirth ceremony atop mountain in 1915 with flaming crosses. Klansmen still hold occasional gatherings in the shadows of the edifice, albeit now met with protesters behind police tape. Many of those cross-burnings took place on or around July 4.

The monolithic monument was proposed more than a century ago and had numerous false starts over the years.

But with the rise of the Civil Rights Movement, segregationist officials in the state pushed for the creation the Stone Mountain Memorial Association in 1958 and purchased the park. The carving was completed in 1972.

“This debate has been going on for years, and we’re sensitive to it,” John Bankhead, a spokesman for the group, said. “We want to tell history as it is, not as some say it is.”

In the past, others have suggested putting more balance into the monument. There was a proposal to build a memorial to Martin Luther King Jr, the Atlanta-based civil rights icon, but the Sons of Confederate Veterans, as well the King family, rejected the idea.

Even though that idea floundered, Hobson advocates adding more carvings to the rock face, including African American historical figures and civil rights leaders.

“It needs to be put in a context that forces a conversation, a serious conversation,” he said. “The easiest way to rectify it, is surround it.”

Griggs of the NAACP said that the civil rights group has consulted with stone masons who said it would cost about $300,000 to $400,000 to remove the towering images. “Take it down,” he said. “Restore the mountain to its original condition.”