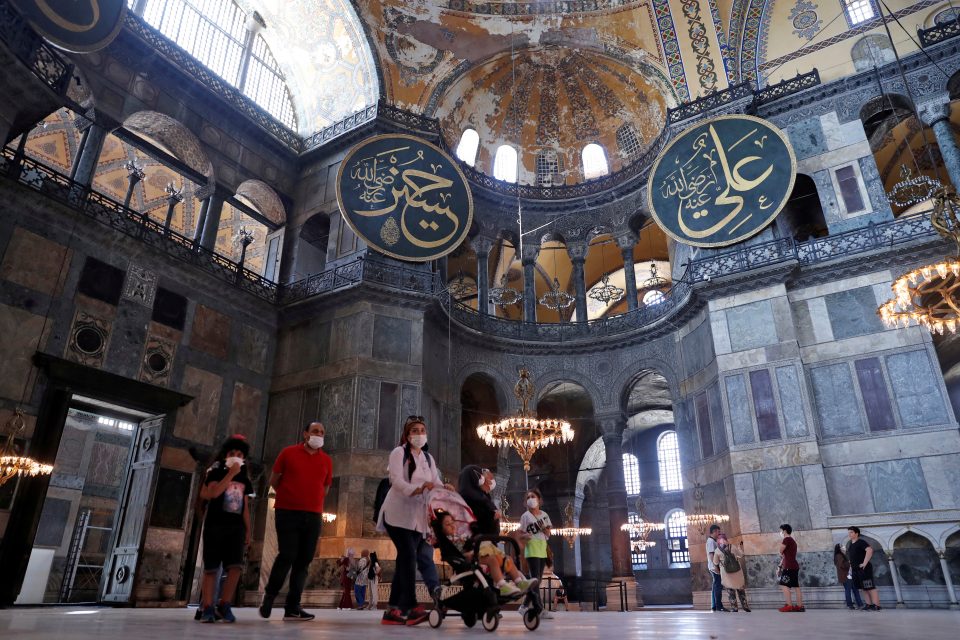 Hagia Sophia in Istanbul was a Christian cathedral that became a Muslim mosque that became a museum. Modern Turkey sits at a crossroads between Asia and Europe where other civilisations have been and gone and left their mark in monuments and ancient ruins and Kemal Ataturk was acutely aware of this aspect of Turkish identity when he established modern Turkey after the collapse of the Ottoman Empire.

Ataturk did not just succeed a defeated sultan politically when he set up the Turkish Republic in 1923, he also abolished the Caliphate and created a new exclusively Turkish secular state. And although the Turkish Republic was in international law the successor state of the Ottoman Empire it was in every other respect completely new.

As a gesture of goodwill to Orthodox Christianity, Ataturk turned Hagia Sophia into a museum to spare the Christian Orthodox world the hurt of seeing Hagia Sophia function as a mosque when there were many other mosques including the Blue Mosque available in Istanbul for devout  Muslims to do their prayers.

Rumour has it that this was also the stance of President Erdogan originally. He was opposed to converting Hagia Sofia back into a mosque because he saw no need for it: there are thousands of mosques in Istanbul that people do not attend he is said to have complained scornfully.

Last week a Turkish administrative court heard a case in which it was argued that Ataturk’s decision to turn Hagia Sophia into a museum was unlawful. It was a bold argument since it was a decision taken in 1935 and governments since then have acted on the basis of its lawfulness nationally and internationally. Unsurprisingly, the hearing was short and judgement was reserved and is expected within two weeks.

The argument put forward is familiar. The state had no power to deal with Hagia Sofia as it was property left by the sultan to be administered by an endowment foundation known as a vakif and that under Ottoman law such properties are held on trust and are inalienable notwithstanding state or international treaty law to the contrary.

I can’t see the court holding that Ataturk acted unlawfully. In any case, in the real world of Turkish politics it is going to be the Turkish government that will decide whether Hagia Sofia is going to cease to be a museum and become a mosque, and that means President Erdogan will decide the matter in due course.

Which is exactly what will determine the fate of Hagia Sofia. If Erdogan has changed his mind it is probably because his party lost Istanbul in the last mayoral elections and converting Hagia Sofia into a mosque would apparently be a popular move, even if a slap in the face of Ataturk.

However, the question is not whether it would be popular or not, or whether the Turkish state has the sovereign power to convert Hagia Sofia back into a mosque; as plainly it does have such a power. The question is whether it is wise to do so.

Loosely translated Hagia Sofia is Greek for divine wisdom and President Erdogan owes it to the symbolism of the building and its name to be wise about it.

It was built as Christendom’s main cathedral and functioned as such for 900 years before it became a mosque when the Ottomans conquered Constantinople in 1453.

States exercise two kinds of power in foreign affairs: soft power and hard power. The question for the Turkish government is whether in terms of the exercise of soft power it is wise to disturb the most important symbol of Orthodox Christianity.

President Vladimir Putin is no longer a communist KGB apparatchik. He is Russian president, probably for life, and a devout Russian Orthodox who crosses himself before cabinet meetings. He is close to the Russian Orthodox Church and although it has fallen out with the Ecumenical Patriarchate over the Ukrainian Orthodox Church, they will all stand together over Hagia Sofia. The same is true of all the Orthodox churches in the Balkans –  to a greater or lesser extent they all caught religion after the collapse of the Soviet Union and will not take too kindly to any change in the status quo of Hagia Sofia.

Last but not least there is Greece and Cyprus. Long term, Turkey will have to normalise her relationship with both her Greek Orthodox neighbours and converting Hagia Sofia into a mosque will sour relations for a very long time as these things are felt viscerally in Greece and Cyprus.

I would leave well alone, not because it is not in the gift of the Turkish government to decide its museums and its mosques but because Hagia Sophia is a museum that is loaded with symbolism in the Orthodox psyche and because, as President Erdogan himself thought previously, there is no need for another mosque.