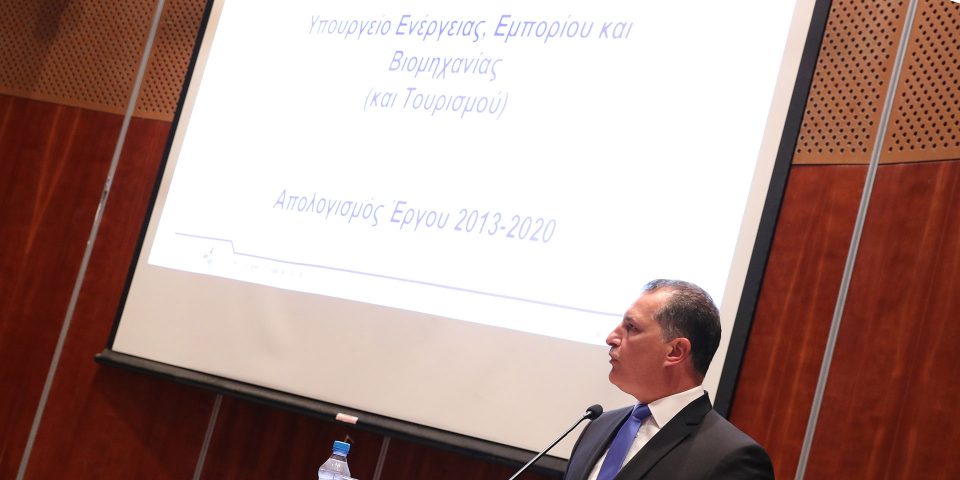 If Cyprus declares a moratorium on work in the island’s exclusive economic zone (EEZ) due to any challenges from Turkey or the Turkish Cypriots, it will be the end of the island’s energy prospects, outgoing Energy Minister Yiorkos Lakkotrypis warned on Monday.

The minister was speaking at a news conference to mark the end of his seven-year tenure in his post which also included the commerce and industry portfolios, and previously tourism.

“If the time comes when we ourselves will tell our companies, ‘stop what you are doing for the sake of the Cyprus issue or for the sake of Turkish challenges’, that will be the end of any energy prospects in the country,’” he said.

The answer was in response to a question as to whether Cyprus could unilaterally declare a moratorium within its EEZ in order to defuse the situation created by Turkey’s actions in the region, but also to give impetus to the dialogue on the Cyprus issue.

When asked if such a thing could be done, Lakkotrypis said that based on the contractual obligations with the companies licensed to operate in Cyprus’ EEZ, the “the answer is clearly no”.

Lakkotrypis said another five to eight drillings are planned for 2021, as those set for 2020 were delayed due to the coronavirus pandemic.

“We should have been completing the first drilling in block 6, Kronos now,” he added.

Nonetheless, firms which postponed their works in the island’s EEZ due to the coronavirus have already informed the ministry in writing their intention to begin again once that is possible in March or April 2021.

He told reporters that “a new round of licensing is always on the table, depending on the developments,” though the markets were complicating Cyprus’ gas ambitions.

Lakkotrypis also said during the news conference that his ministry had the smallest budget out of all ministries in 2019, accounting for only 0.8 per cent.

His ministry had the lowest share of the government budget towards ministries and the second lowest in 2020, after the foreign ministry.

“There is a need to strengthen the ministry considering it has the responsibility of managing important productive sectors of the economy,” Lakkotrypis said.

The budget in 2020 was reinforced due to the €66m, as part of EU funding towards the construction of a liquefied natural gas (LNG) terminal in Cyprus.

The terminal offers “commercially and geopolitically the best solutions” for Cyprus, Lakkotrypis said. For Cyprus, its options are bearing fruit simultaneously as “studies for the EastMed are happening, which is supported by the EU.”

Construction is set to begin at Vasilikos for the LNG terminal which is hoped to reduce electricity prices and produce clean energy, he added.

Commenting on tourism, Lakkotrypis said that since 2015, the island has also been performing higher than the global average and better than similar markets. By 2018, arrivals had reached four million, and in 2019 the deputy tourism ministry was created.

Major projects have been promoted including the casino resort, marinas and golf courses, the minister added.

As far commerce is concerned, Lakkotrypis said that since 2013, there has been a sharp increase in the export of services, by 60 per cent, worth €12.3m.  These are travel services, which marked a 42 per cent increase, transport by 25 per cent, financial services 53 per cent and information communication technologies (ICT) by around 245 per cent, the minister said.

The huge spike in ICT services export is due to many technology firms headquartering on the island, he added.

The export of pharmaceutical products increased by 85 per cent between 2013 – 2019 and halloumi exports hit a whopping 263 per cent increase during the six-year period.

Reviewing the energy sector, the outgoing minister said since 2013, the total contribution of renewable energy went from around seven per cent to approximately 14 per cent, in 2018, meeting Cyprus’ targets two years earlier.

Lakkotrypis said natural gas is a bridge towards a renewable future and that “demand for natural gas would last for many more years”. A lot also depends on how each company sees developments for the next five to 10 years, he added.

According to Lakkotrypis, since the net metering programme was launched in 2013, more than 16,500 homes have installed photovoltaic systems and €31m went towards energy saving schemes for homes and businesses.