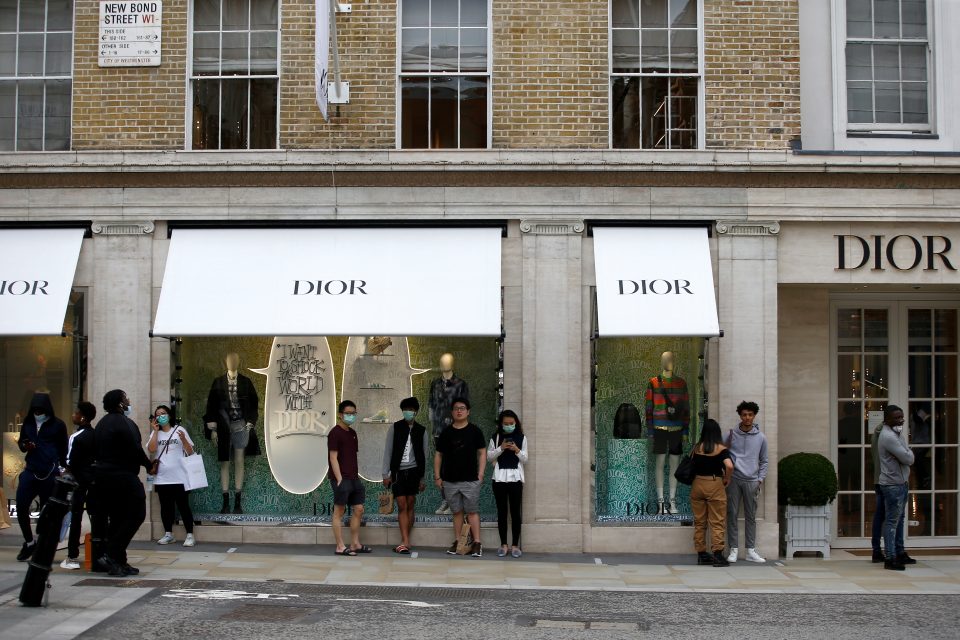 People stand outside a Dior store, as shops re-open amid the coronavirus disease (COVID-19) outbreak, in New Bond Street in London. REUTERS/Henry Nicholls

By Silvia Ognibene and Silvia Aloisi

With unsold luxury handbags and clothing gathering dust in their workshops, Italy’s artisans fear for their future as brands cut orders and in some cases demand discounts and payment delays.

Italy accounts for around 40 per cent of global luxury goods manufacturing and has been hit hard by a dramatic drop in demand triggered by the coronavirus crisis, with several artisans saying they have no new orders beyond the summer.

This illustrates how some mid-size luxury brands are attempting to protect their margins to make up for sales lost during weeks of lockdowns.

Hugo Boss said it has “close and long-standing relationships” with its suppliers and “is working together with them to find solutions based on partnership that are appropriate to this situation”.

Reuters spoke to half a dozen Italian artisans supplying top luxury brands who said they had seen a cut in orders of between 20 and 50 per cent in May and June compared with last year.

Hugo Boss has also asked for payments to be delayed to 120 days after delivery, from 10 days in normal times, one of the group’s Italian suppliers, who asked not to be named, said.

“If things don’t go back to normal in the next couple of months, the worry is that from September onwards the situation will deteriorate further and that many luxury suppliers, particularly the smaller ones, will go bust,” David Rulli, head of fashion at business lobby Confindustria in Florence, said.

Luxury brands shut shops and idled manufacturing sites as the coronavirus first emerged in China, a key market for the sector, and then spread to the rest of the world.

With major economies facing recession, demand for high-end clothes and accessories is expected to fall by up to 35 per cent this year and revenues may take until 2022-23 to return to an estimated 2019 level of €280 billion, according to consultancy Bain.

Labels are grappling with piles of unsold stock and in most cases the prospect of widespread markdowns.

Top brands from Chanel to LVMH’s Louis Vuitton and Kering’s Gucci have raised prices of some of their most coveted products in a bet they can still lure the wealthy.

However some houses, including Gucci and Michael Kors, are scrapping or delaying new collections and say luxury should stop mimicking fast fashion’s hectic delivery cycles.

“We have enough orders to keep going until July but I am very concerned about the second part of the year which for us is crucial,” Filippo Baldazzi, CEO of silk manufacturer Serica 1870 which works with Brunello Cucinelli, Kering and French rival LVMH, told Reuters.

“At this time of the year I would be presenting my fabrics for next year’s fall and winter collections but no one is thinking about that now. Plus you can’t show fabrics by video, people have to touch it,” he said.

Some luxury labels say they are juggling their own goal to reduce production and keep a lid on costs with the needs of struggling suppliers who they cannot afford to lose.

Chanel has scaled back orders “while trying to maintain a minimum level of activity with suppliers in France and Italy to make sure they don’t go bankrupt,” its finance chief Philippe Blondiaux told Reuters in a recent interview.

Italy and France are between them by far the two main producers of European luxury goods.

Dior, one of the LVMH conglomerate’s biggest labels, also pointed to the need to support suppliers as it said last week that it was sticking with its 2020 fashion show programme.

Some executives in the industry, which in Italy alone employs 400,000 people, say the crisis could accelerate a trend where big brands snap up artisan workshops to tighten their grip on the supply chain and ensure prized manufacturing skills do not vanish.

“Real luxury is in the small details. I think many groups, including foreign ones, have realised that once those artisans are forced to close, that kind of sophisticated work ends with them,” Baldazzi said.

Classic colognes: 6 men’s fragrances that have stood the test of time

The good guys: how men can be allies to women at work

Try these fun activities at home to kill boredom

Check you out: How to wear heritage patterns this season