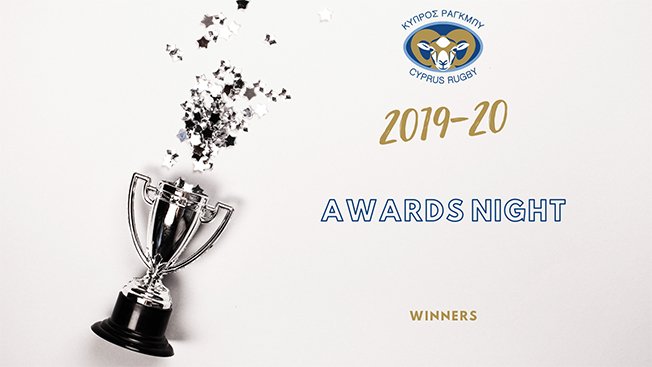 The Cyprus Rugby Federation (CRF) finished the season on a high with a successful virtual end of season gathering via Zoom.

The session had over 80 paying attendees with player and host Marcus Holden pulling together a number of interesting and well-choreographed videos.

CRF President Constantinos Constantinides gave a short speech to all and was then interviewed by Holden.

Moreover a specially recorded video by Cyprus Sports Organisation (KOA) president, Andreas Michaelides, was shown; Michaelides congratulated the ‘Mighty Mouflons’ on the successes achieved both on and off the pitch and he stated KOA’s commitment to supporting the team – current Guinness World Record holders for the number of consecutive international wins (24) for the future.

The award winners are as follows:

· The Coaches Player of the Year award went to hooker Marios Zakakiotis, with a short video showing him in action, some very proud moments for both him and Cyprus supporters alike.

· The Players Player of the Year award went to Marko Mladenovic, with clips of Marko’s action being shown.

· Jake Goodwin was awarded Most Improved Player of the Year.

· The coaches Most Valuable Player of the Year (MVP) award was given to Marcus Holden (usually wears the number 10 jersey). Clips of his running and penalty kicks were shown.

· The On-Island player of the Year award went to Philippos Pouroullis.

· The On-Island Club of the Year award was given to Larnaca Spartans.

Congratulations and well done to all on their respective awards.

The session attendees were treated to another recorded message from special guest Cypriot Smurf, who provided some light-hearted special wishes to the Cyprus Rugby team.

Video clips will be available to watch on the official CRF website cyprus-rugby.com soon.

Thanks to all for their support and we wish the Cyprus Rugby team every success in the coming season.