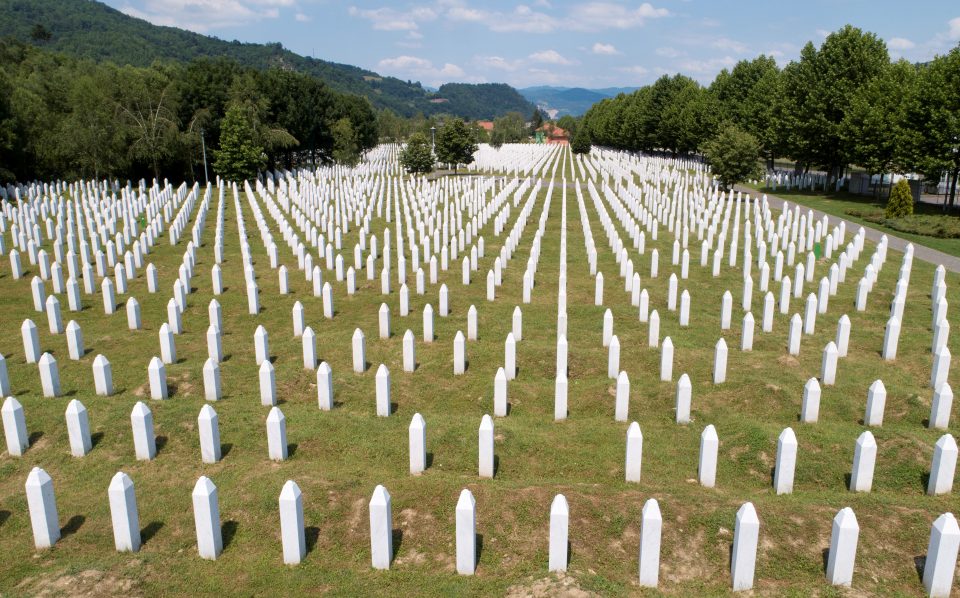 An aerial view of the Memorial Center in Potocari near Srebrenica, Bosnia and Herzegovina

The Bosnian Serb government is indoctrinating children with denials of the 1995 genocide in Srebrenica of 8,000 Muslim men and boys, and wrecking attempts at reconciliation, the head of a U.N. court said in an interview.

Judge Carmel Agius, president of the court completing war crimes trials stemming from the breakup of Yugoslavia, added unhealed ethnic divisions in Bosnia were driving the younger generation away in their tens of thousands.

Members of the Republika Srpska government have repeatedly questioned the number of Bosnian Muslims killed in Srebrenica a quarter of a century ago this week. They also accuse the Yugoslav war crimes tribunal of anti-Serb bias.

“What you find is a humongous effort on the part of the authorities to indoctrinate their children with their own version of the events,” Agius told Reuters.

The Serb member of Bosnia’s tri-partite presidency, Milorad Dodik, last year called the Srebrenica genocide “a fabricated myth”. He has also opened a student dormitory named after former Bosnian Serb leader Radovan Karadzic, who is serving a life sentence after being convicted of genocide for Srebrenica.

Last month in the northern town of Gradiska Bosnian Serbs put up a huge mural at a primary school of Ratko Mladic, military leader of Bosnian Serb forces as they overran Srebrenica, which had been declared a U.N. safe area in 1993 and was protected by lightly armed Dutch troops.

The Bosnian Serb army seized the area on July 11, sending the women away in buses and transporting the men to dozens of execution sites. Their bodies were dumped in mass graves.

Mladic has appealed his conviction for genocide over Srebrenica, war crimes and crimes against humanity.

In 2018 Bosnian Serb authorities withdrew a 2004 report by their predecessors acknowledging the genocide and established a panel to review the number of victims.

Bosnian Serb Prime Minister Radovan Viskovic said last weekend a new report would be completed in a month or two.

“In this way the Serb Republic government wants to bring the truth about the suffering of Serbs…closer to the international community and historians, who when they write about these events one day, will have clear evidence that truth is not only what one side states,” Viskovic said.

Agius said the international war crimes cases have left no room for misunderstanding: “They all come to one conclusion: namely that what happened in Srebrenica was genocide.”