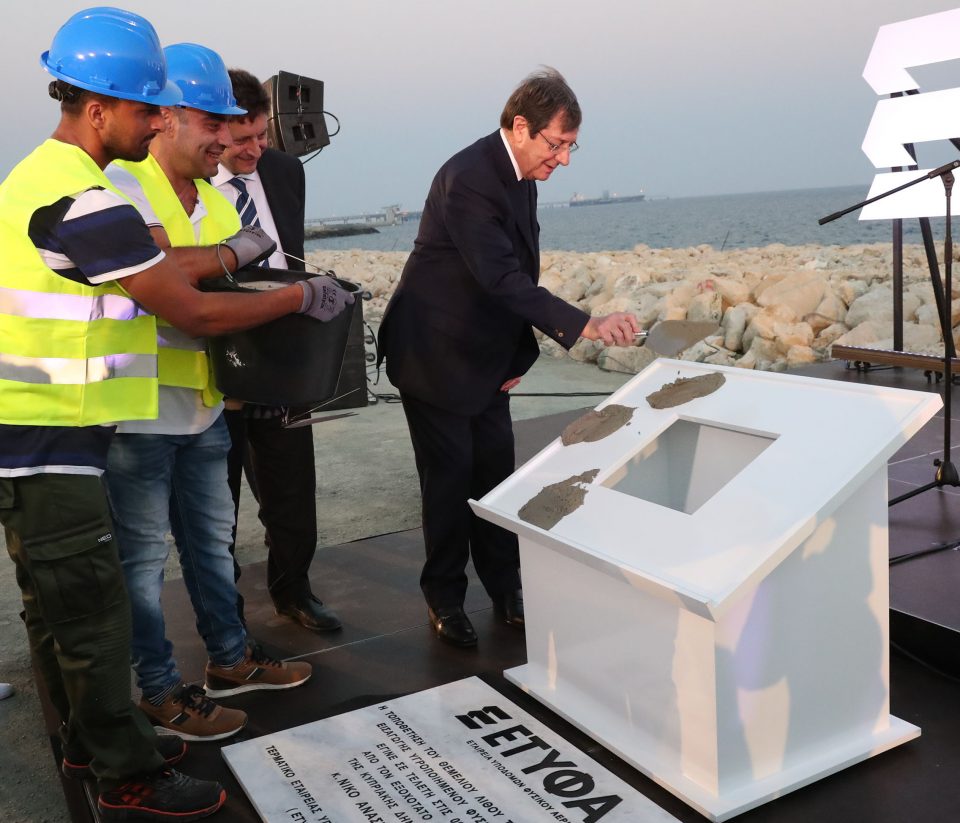 The construction of a liquefied natural gas (LNG) terminal in Cyprus marks a milestone in modern Cypriot history, President Nicos Anastasiades said Thursday evening as he lay the foundation stone for the facility in Vassilikos, Limassol.

“It is a project which places Cyprus in the orbit of a new energy era, opening up robust prospects both for economic growth as well as for the broader prosperity of our country and its people,” he said.

Considered to be the single largest energy project on the island, the LNG facility will feature a floating storage and regasification unit, a jetty, mooring facilities, a pipeline on the jetty and other onshore and offshore related infrastructure.

Construction is expected to be concluded in 2022. Natural gas, to be imported in the liquid form, will be reconverted into gas and used to power electricity stations.

Cyprus had separated the project into two parts: one for the LNG terminal itself, and another for the supply of the fuel.

The government is currently in the process of inviting expressions of interest for the supply of LNG. Around 25 companies have expressed an initial interest. The supply contracts are expected to have a duration between three to five years.

“With today’s laying of the foundation stone, a lengthy effort to bring natural gas to Cyprus has finally come to an end,” the president noted in his remarks.

“It was an effort,” he went on, “marred by a multitude of problems, sometimes due to expediencies or red tape, other times due to a lack of determination.

“Even during the last stage, last November, when the [tender] procedures were completed, there were certain people who used baseless arguments to try and get the whole endeavour put on hold, fully aware that the European Union has decided to stop financing energy projects with natural gas as of 2020.”

It’s understood this remark was a dig at the auditor-general, who late last year raised questions about the successful bidder selected by the government.

However, Anastasiades said, that was all in the past.

“Today, leaving the past behind us…we are able to implement a government decision [to import natural gas] taken in February 2003.”

He stressed that using natural gas rather than heavy fuel oil would significantly reduce Cyprus’ carbon footprint – by almost 30 per cent – and at the same time lower electricity generation costs anywhere from 15 to 25 per cent.

Ultimately, that will benefit businesses as well as the broader public.

In closing, Anastasiades said he was looking forward to construction being completed on schedule and to being present for the facility’s inauguration.