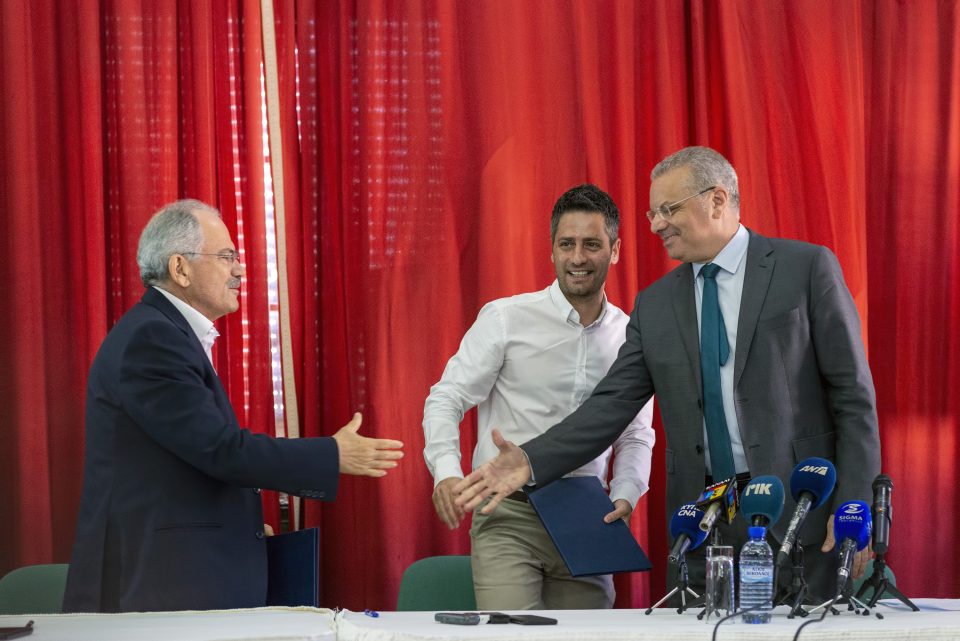 Mayor Nicos Nicolaides (left) said it was an historic day

Limassol municipality and the Land Development Corporation (KOAG) reached an official agreement on Thursday regarding the establishment of the largest housing project ever undertaken in Cyprus, worth €100m.

The agreement will involve the construction of over 600 new housing units in Limassol to meet the needs of low-income families, students and young couples.

Three municipal plots will be used for the project, two in the Ayios Nikolaos area and one in Ayios Ioannis, which will occupy a total area of ​​31,081 square metres.

“Today is an historic day for Limassol,” said Mayor Nicos Nicolaides during the project’s unveiling.

“After three years of efforts, we have finally succeeded to make our vision a reality. Today our goal of providing a roof for those who need it the most has become a reality.

“The whole project is based on the principles of sustainable development and environmental planning, so that long-term economic, social and environmental benefits are provided, not only for low-income families, but for the whole city, for current and future generations.”

KOAG president Marios Pelekanou also spoke during the project launch and thanked the Limassol municipality for their cooperation and for “a great effort that will change the game regarding affordable rents.”

“Our organisation has always placed affordable housing very high on the list and this agreement is a step forward towards helping families who are struggling with their rents.”

Pelekanou added that the houses will all be energy-efficient and their maintenance costs will be much lower than traditional housing units currently on the market.

Interior Minister Nicos Nouris later on Thursday also said the agreement represented an historical day not just for Limassol, but for Cyprus as well, pointing out that the housing project would be the largest ever built in the country.

“This agreement will help normalise housing prices in Cyprus, as well as help low-income families who are struggling with making ends meet,” he said.

“Companies from the private sector, along with the Limassol municipality and KOAG, will also be involved in the project, that will use funds raised by Cyprus Investment Programme as well.”

The project will involve several phases, based on a specific schedule that will be prepared by the Limassol municipality and by KOAG in the upcoming months.

It is expected that the maiden phase of the project, that will see the erection of the first housing units, will begin in about a year and a half and that the first newly-built houses will be rented out to individuals or families whose low-income has been fully documented to the competent state services.