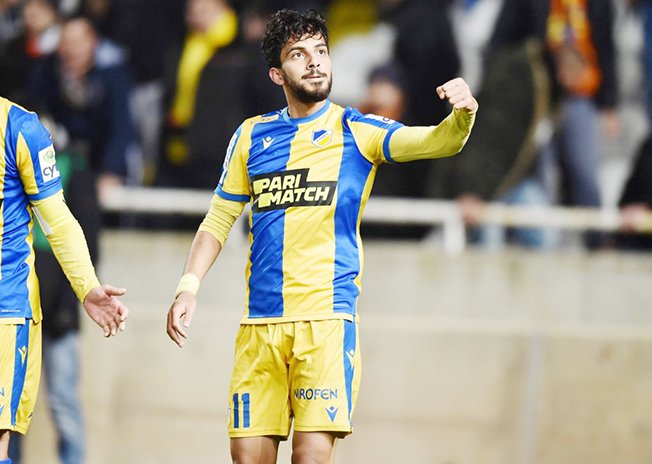 Apoel's Jordanian forward Musa Al-Taamari. The most significant alteration has been to the rule stipulating the maximum number of foreign players, not including those with a European Union passport

The Cyprus Football Association (CFA) has made significant changes to the rules concerning player transfers and player registrations. The most significant alteration has been to the rule stipulating the maximum number of foreign players, not including those with a European Union passport.

The changes were announced in the league declaration for the 2020-2021 season released on Thursday.
In regards to the foreign player allowance, the number has been increased to seven from the previous figure of five. This change does not affect the maximum number of players a club can register in any way.

The Cyprus Football Association’s full statement can be read below:

“The CFA is releasing its official declaration for the 2020-2021 Cyta Football Championship which has been agreed by the executive committee of the federation. The main changes that have been approved and included in the declaration are the following: foreign players in Division One clubs have been increased from five to seven without affecting the number of players a club can register.

“Three additional members of staff can now be next to the technical staff on the sidelines, provided that the necessary facilities are in place and that these individuals are registered in the game’s documentation. In stadiums where such facilities are not available, the maximum number of staff that can be on the sidelines remains at the previous figure of eight people.

“Clubs can now complete the transfer of a free agent to replace another player up to four days after the transfer window has expired.”

“A club can fill in a vacant spot in List A which has resulted from a contract cancellation or removal, provided that this is done within the January transfer window.”

“Clubs can use the January transfer window to complete their List A player allocation, even if it wasn’t done so before that period.”

“The use of any electronic devices from managerial or technical staff for the implementation of any health and safety guidelines and player protection can now be used.”

“The pitch watering system’s schedule will be given to the association beforehand by the home team on the last workday before a game takes place.”

“Pitch watering must be done on the entirety of the pitch, not just selected areas, and it has to be completed no later than 60 minutes before a game commences. However, further watering can take place after this window has expired provided that it happens between five and ten minutes before the game officially starts or during half-time and for no more than a duration of five minutes.”

“Foreign players who have obtained a Cypriot passport and have played in at least one Cyprus National Football Team game, can now be included in the list of ten nationally homegrown players a club has to register. However, these players will not be counted by the association as part of that ten-man quota. The club still has to meet that quota separately, but is allowed to include naturalised players on top of that quota.”

New disciplinary regulations were also announced. The biggest change will be that when a player receives a one-game ban for three yellow cards, his club will be allowed to choose which of the following two games he will miss.