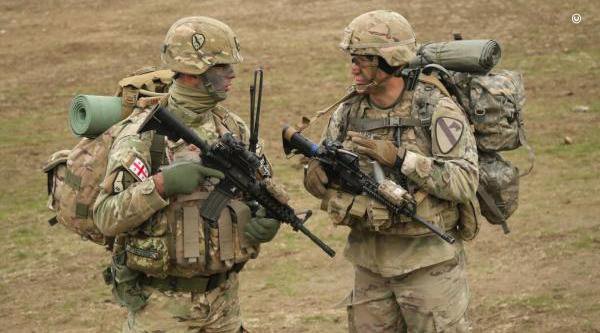 The IMET programme is a key component of US security assistance, promoting regional stability and defence capabilities, Washington says

Cyprus will not cut ties with Russia because of participation in a US military training programme, Defence Minister Charalmbos Petrides said Friday, following a meeting with main opposition Akel general-secretary, Andros Kyprianou.

Petrides said the ministry’s goal was to cooperate with “all friendly countries, no exceptions”.

Cyprus’ participation in international programmes contribute to the development of bilateral relations, he said.

He added that US military training programmes do not in any way involve cutting ties with other countries.

Commenting on Russia, he said: “It is a country with which we have had excellent cooperation over time, and I assure you that there is no question of terminating this cooperation.

“We look forward to a substantive and productive partnership.”

On Wednesday, US Secretary of State Mike Pompeo said for the first time, Washington would provide international military education and training (IMET) funding to Cyprus, as part of the state department’s efforts to enhance relationships in the area through the Eastern Mediterranean Security and Energy Partnership Act 2019.

The act was first introduced by US Senators Robert Menendez and Marco Rubio and signed into law in December 2019.

It provides among other things for the lifting of the decades-long US arms embargo on Cyprus allowing it to purchase US-made military equipment and for US $2m in IMET assistance each for Cyprus and Greece.

However, the law sets as terms that Cyprus needs to continue to cooperate with the US in efforts to implement reforms on anti-money laundering regulations, and also take steps to deny Russian military vessels access to the Republic’s ports for refuelling and servicing.

The reference to Russian vessels at the time was described by President Nicos Anastasiades as “unfortunate” and he added it greatly affected Cyprus’ independence and sovereignty.

Akel earlier this week condemned the IMET deal, warning of the US’ “dangerous geopolitical plans in the region”.  First and foremost, it promoted the dissolution of Cyprus-Russia relations, the party said.

“The government will have to clarify whether it intends to proceed with this ‘cooperation’ and whether the Cypriot armed forces will now be defending American interests.” A day later, the government welcomed the US offer, which was also condemned by Turkey and the Turkish Cypriots.

The US embassy said IMET was a key component of security assistance, promoting regional stability and defence capabilities through professional military education and training and that the training can start in 2021 “subject to Congressional appropriations and notification”.