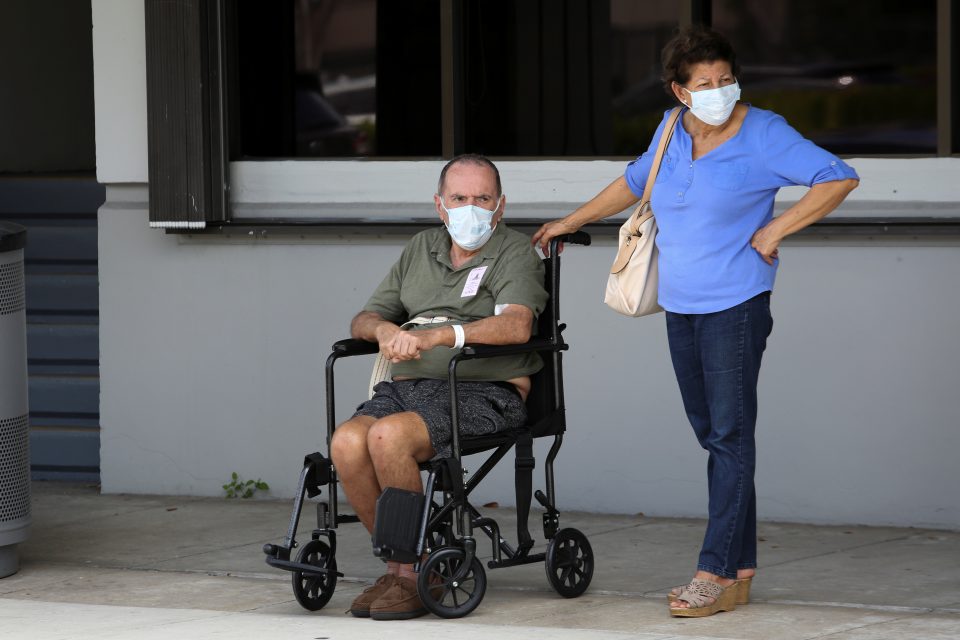 More than 60,500 new COVID-19 infections were reported across the United States on Thursday, according to a Reuters tally, setting a one-day record as weary Americans were told to take new precautions and the pandemic becomes increasingly politicized.

The total represents a slight rise from Wednesday, when there were 60,000 new cases, and marks the largest one-day increase by any country since the pandemic emerged in China last year.

As infections rose in 41 of the 50 states over the last two weeks, Americans have become increasingly divided on issues such as the reopening of schools and businesses. Orders by governors and local leaders mandating face masks have become particularly divisive.

“It’s just disheartening because the selfishness of (not wearing a mask) versus the selflessness of my staff and the people in this hospital who are putting themselves at risk, and I got COVID from this,” said Dr. Andrew Pastewski, ICU medical director at Jackson South Medical Center in Miami.

“You know, we’re putting ourselves at risk and other people aren’t willing to do anything and in fact go the other way and be aggressive to promote the disease. It’s really, it’s really hard,” he said.

Stephanie Porta, 41, a lifelong Orlando, Florida, resident, said only about half the shoppers at her grocery store wore masks, though that was more than she saw two weeks ago.

“They’re trying to make everything seem normal, when it’s not. People are dying, people are getting sick. It’s insane,” she said.

Governor Ron DeSantis called the rising cases a “blip” and urged residents not to be afraid.

“I know we’ve had a lot of different blips,” DeSantis said. “We’re now at a higher blip than where we were in May and the beginning of June.”

Florida is one of the few states that does not disclose the number of hospitalized COVID patients. But more than four dozen Florida hospitals reported their intensive care units reached full capacity earlier this week.

In Texas a group of bar owners sued Governor Greg Abbott, a Republican, saying his June 26 order closing them down violates the state constitution, the Dallas Morning News reported.

Dr. Robert Redfield, director of the U.S. Centers for Disease Control and Prevention, said Thursday that keeping schools closed would be a greater risk to children’s health than reopening them.

California and Texas, the two most populous states, announced record increases in COVID deaths on Wednesday.

California has seen cases and hospitalizations surge, even though it imposed one of the strictest lockdowns. After several lawmakers and staffers at the state Capitol in Sacramento were infected, lawmakers said the legislature would not return from summer break until July 27.

Riverside University Health System, east of Los Angeles, expanded its 44-bed intensive care unit after it filled up with patients.

“It’s been very consistent every day in the last couple of weeks. Every day has been like a full moon,” Riverside emergency room physician Stephanie Loe said, referring to doctors’ beliefs that a full moon brings more patients to the emergency room.

Governors in California, Florida and Texas have either ruled out forced business closures and quarantines or called them a last resort. But Los Angeles Mayor Eric Garcetti warned he would impose a new stay-at-home order in two weeks if the latest surge did not ease. The rise in infections also weighed on the stock market Thursday on fears of new lockdowns, which would take a toll on the economic recovery. The Dow and the S&P 500 ended down about 1%.

Australia will halve the number of citizens allowed to return home from overseas each week, Prime Minister Scott Morrison said on Friday, as authorities struggle to contain a COVID-19 outbreak in the country’s second most populous state.

Since March, Australia has allowed only citizens and permanent residents to enter the country. Once they arrive, they enter a mandatory 14-day quarantine in hotels, which is paid for by state governments.

Morrison said from Monday, Australia will cap the figures at 4,000 people each week. Those who return will also have to pay for their quarantine stays.

“The decision that we took… was to ensure that we could put our focus on the resources needed to do the testing and tracing and not have to have resources diverted to other tasks,” Morrison told reporters in Canberra after a meeting of the national cabinet.

Neighbouring New Zealand enacted measures earlier this week to limit the number of citizens returning home to reduce the burden on its overflowing quarantine facilities.

The lockdown will last for six weeks following a surge in coronavirus cases linked to social distancing breaches in hotels where returned travellers were held in quarantine.

The flare-up has forced 5 million Australians to stay home for all but essential business, led the rest of Australia‘s states to ban Victorians from entering, and dealt a blow to Australia‘s economic recovery.

To ease the pain for businesses in Melbourne forced to shut again and holiday spots hit by cancellations, the Victorian government on Friday said it would provide a further A$534 million ($371 million), on top of A$6 billion already provided.

“This is us saying: ‘We’re here with you all the way through what will be a very traumatic, a very distressing and a very difficult time for all Victorians,'” state Treasurer Tim Pallas said in a televised media conference.

Pallas said the state, which makes up about a quarter of Australia‘s economy, now expects unemployment to peak at 11%, up from 6.9% now. Victoria’s economy is expected to shrink by 14% and take two to three years to recover, he said.

“I apologise for it because this is nowhere where any Victorian wanted to be, but it is the reality of the situation that we confront,” Pallas said.

Despite surging numbers of cases in Victoria, the state’s premier Daniel Andrews has relaxed restrictions on most of the 3,000 people locked down in nine public-housing towers.

Residents in eight of the towers are now under the same restrictions as metropolitan Melbourne. The other tower remains in a hard lockdown.

A testing blitz found 158 out of nearly 3,000 residents were infected with the virus. About one-third of those were in one tower, where everyone is being forced to self-isolate for nine more days.

Even with the latest outbreak, Australia has done relatively well in controlling the novel coronavirus so far, with around 9,000 cases and 106 deaths.