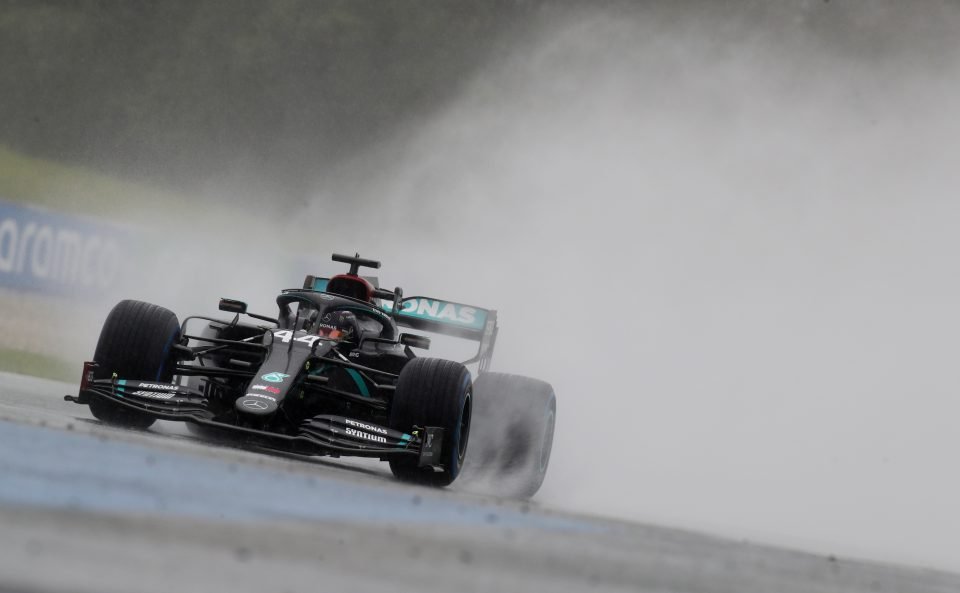 Lewis Hamilton dominated the wet conditions to see off Max Verstappen and take pole position for the Styrian Grand Prix.

Even before Saturday’s rain-hit delayed qualifying session, the six-time world champion had long staked his claim as one of the sport’s finest to ever race in the wet – and here he delivered an absolute masterclass.

Hamilton finished a staggering 1.2 seconds faster than Verstappen, with McLaren’s Carlos Sainz third. Valtteri Bottas, in the same machinery as Hamilton, was 1.5 sec behind his team-mate in fourth.

Hamilton, who earlier urged his race engineer Pete Bonnington to “leave him to it” over the team radio, topped all three sessions before claiming the 89th pole of his career – and first in his pursuit this year to match Michael Schumacher’s record of seven world titles.

As his rivals faltered, Hamilton banged in fastest lap after fastest lap on his way to completing one of the most impressive qualifying performances in recent memory.

“I love these days,” said Hamilton. “The weather is incredibly difficult for all of us. A lot of the time you cannot see where you are going.

“I had a big moment where I aquaplaned and had my heart in my mouth but I was able to improve. I didn’t make any mistakes so that is always a positive.”

Verstappen, who spun at the final corner on his last lap, said: “Second is still good. It was just tricky out there. The last lap was better but it wouldn’t have been enough to beat Lewis.”

Norris became the youngest British driver to stand on top of a Formula One podium with a fine drive to third in Austria last weekend.

And the McLaren star carried over his impressive form to finish in sixth, one spot behind Renault’s Esteban Ocon. However, he will be bumped back three places following a grid penalty for a yellow-flag infringement in practice yesterday.

George Russell was among the standout performers in the tricky conditions. The 22-year-old, now in his second season, made it out of Q1 for the first time in his career, and then put his Williams in 12th.

These are difficult times for Williams – indeed, this marked the first time one of their cars had progressed to the second phase of qualifying since the Brazilian Grand Prix in 2018 – and Russell is proving a shining light.

The Englishman is under contract with Williams until the end of next year, but his performance on Saturday might make Mercedes team principal Toto Wolff sit up and take notice.

Russell is on the books as a junior driver with the world champions and he will be in the frame for a seat with the Silver Arrows if they change their driver line-up for 2021. Russell finished 1.4 sec and six positions ahead of his rookie team-mate Nicholas Latifi.

Charles Leclerc took advantage of a late safety car to take an unlikely second in the season-opening race, but the man from Monaco failed to progress to the top-10 shootout, finishing 11th.

The struggling Ferrari team are braced for a difficult year and despite sneaking through to Q3, Sebastian Vettel will line up just one place ahead of his team-mate in 10th.