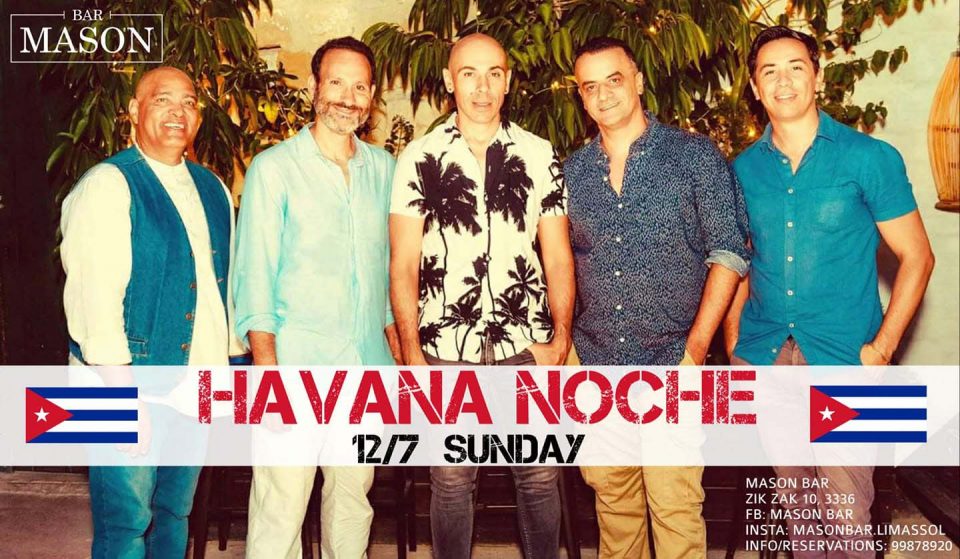 While we wait for more cultural activities and events to get in gear, the live music scene is the one leading the entertainment sector right now as it has the most events. Even if it’s nowhere near the number of events we were used to, more and more bars are adding performances and some big-scale concerts are on the horizon this July.

This weekend Mason Bar – known for hosting many musicians – will host Havana Noche to bring Cuban sounds to life. From 9pm until midnight on Sunday, the famous Latin jazz band is hitting Mason Bar’s stage for an unforgettable comeback, transmitting the energy, enthusiasm and passion of Latin music.

The band was formed in Cyprus by percussionist Constandinos Paouros and includes musicians from Cuba, Colombia and Cyprus. Their music is based on Latin jazz music genres such as son cubano, salsa, timba and cha cha. Strict hygiene measures and distance between tables will apply according to guidelines, as will a €10 music charge per table.

On the same day also in Limassol, band Fuzz Bus will play at Bistrot 55, a set they call the “summer edition”. From 8pm until 10pm the four-piece band will be accompanying those wining and dining at the Bistrot.

In Nicosia two concerts are lined up by well-known Greek stars. Before that, local musicians take the town. On Monday, July 13, Anna Giagkiozi will perform at Kafeneio Valitsa for the first time, with songs inspired by the lockdown and other requests from isolation. Her set will begin at 9.30pm.

On July 22, Greek singer Mariza Rizou, known for her quirky, uplifting and summer music will hold a concert in Nicosia, at Skali Aglandjias. The show will begin at 9pm and presale tickets are now available on tickethour.com.cy

Also at Skali, Yiannis Kotsiras will present his new music accompanied by other musicians on July 29, before holding more concerts in Limassol and Larnaca the following days. And that’s not all for the Aglandjia’s amphitheatre. On July 30 four musicians are coming together for a summer live at the square. Giannis Margaris, Anna Chrysanthou, Alexis Kazakopoulos and Avgi Hadjipavlou are putting on a lively show, commencing at 9pm.

Meanehile in Paphos Technopolis 20 has organised a big jazz reunion on July 21 with jazz singer Sarah Fenwick, Dimitris Miaris on piano, Costas Challoumas on double bass and Marios Spyrou on drums. The four of them consist of the Jazz Reunion Band.

“A special performance dedicated to our emotions during lockdown and in recognition of the incredible value of live music gatherings,” say the musicians. “Enjoy songs of parting and reunion, such as Embraceable You, Every Time We Say Goodbye and many more, under the stars, in the beautiful garden of Technopolis 20.”

Music at the Square