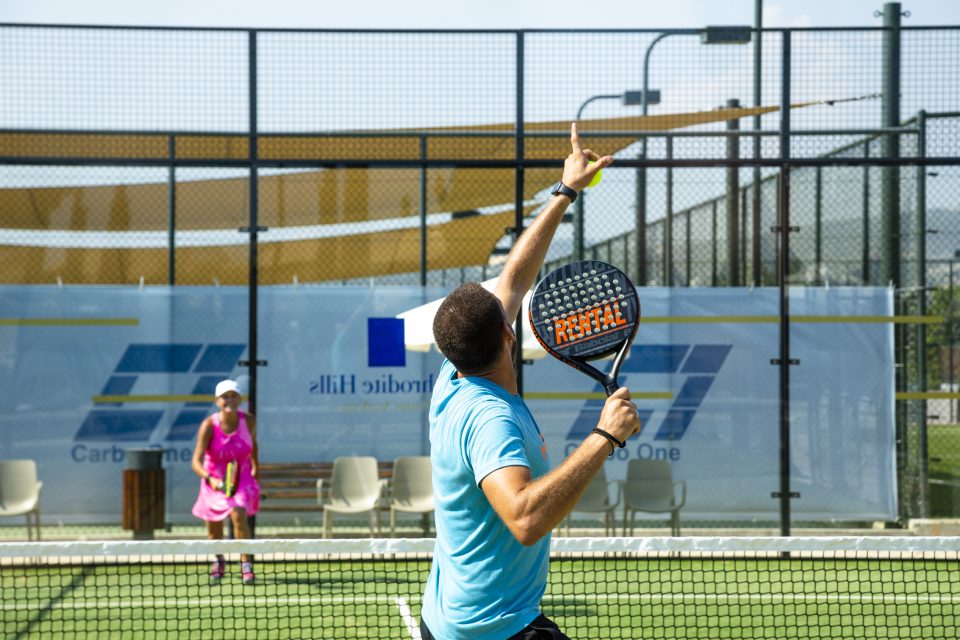 Although it takes its name from the Spanish for paddle, this isn’t the rough-and-ready beach game of your youth. Nor is it a playground activity for kiddies. Padel is actually an incredibly exciting, entirely new sport that’s taking the world by storm!

A professional racquet sport, padel has, over the last decade, gained immensely in popularity – especially in Spain, Latin America and Mexico (where it originated). And now, it’s set to be the Next Big Thing here in Cyprus, with the launch of the very first padel courts at Aphrodite Hills Resort in Kouklia.

A fast-paced, fun cross between tennis and squash, padel is played on a court 10 metres wide by 20 metres in length – roughly two thirds the size of a standard tennis court. You get all the usual paraphernalia: net strung across the middle of the court, service and base lines, and a system of scoring which closely mimics that of tennis. But then it gets a little different – and much more exciting!

Firstly, and most obvious to the eye, are the walls. Padel courts are surrounded by 3-metre walls – here at Aphrodite Hills, they’re made of Plexiglas, which makes them ideal for spectating. Like squash, players can bounce the balls off the walls, often using trick angles and devious shots to confuse the trajectory and take the point.

Next are the racquets. Unlike tennis, squash, or even racquetball, padel racquets have no strings. Rather, they’re generally solid (usually with perforations to allow for a smoother airflow); made from fibreglass over a foam core, they’re the unstrung heroes of the game.

And finally, you get the players themselves. Padel is most frequently played as doubles, and four-player games are the norm. On Sunday July 5, Aphrodite Hills held a short exhibition match to launch the new courts: four players – all professionals from Holland, who have been training the resort’s coaches over the last few weeks – knocking the ball about the court with speed and strength. Both first and second service are underarm, with a bounce before the serve, and the balls ricocheting off the walls made for an enthralling game.

Present at the launch, the President of the Cyprus Sports Association Andreas Michalides noted that it was a privilege to witness the start of this exciting new sport on the island. “Padel is great fun,” he noted, “and Aphrodite Hills are to be congratulated for their vision. This is a sport which can clearly be enjoyed by everyone, of any age and playing ability.”

Here on the island, the game currently falls under the auspices of the Cyprus Tennis Federation. But we might, before long, be seeing padel with an association in its own right – especially if Aphrodite Hills has anything to do with it.

“Padel is an expansion of our vision,” says The Resort’s Communications Coordinator, Elena Constantinou. “One of our goals as a resort is to become a Mediterranean sporting destination – we already have one of only six PGA Golf Courses in Europe, a thriving Tennis Academy, a popular Riding Club, and a flourishing Football Academy – which will see a number of high-profile events over the next 12 months, including a football camp with globally renowned football players some time in 2021. Now, with these two new courts, we’re paving the way for more sports tourism, while introducing an entertaining, relaxing and enjoyable sport to the island. It’s a great way for people who visit us to have fun with their friends, and very easy to learn, so it’s no surprise that padel is taking off across the world!”

First appearing in Mexico in the late 70s, padel rapidly gained in popularity across the Spanish-speaking world and, by the turn of the millennium, was a favourite on the Iberian Peninsula. By 2005, almost every luxury hotel in Spain offered padel tennis as an activity, and the country boasted more than 500 officially recognised clubs.

Fast forward a decade, and padel had gone global: from 2015 to 2016, there was a 76 per cent increase in participation in the UK, and countries as widespread as Australia, Monaco, Russia and the US now boast National Padel Associations. There’s even a World Padel Tour, and a Padel Pro Tour, the brainchild of a group of professional padel tournament organisers.

As the game has garnered global interest, so has its demographic changed. Originally, according to System Padel, one of the world’s foremost constructers of Padel courts, this “highly entertaining and sociable sport was first practiced by the economic and social elites: 31 per cent of whom belonged to high society, and 23 per cent of whom were between 45 and 55 years of age.”

Quite what ‘high society’ entails is anyone’s guess, though it’s clear that what was once a sport for the few has now become far more mainstream: “65 per cent of players now belong to what might be considered the upper and middle classes,” adds System Padel. “Over two thirds of players are now aged from 20 to 45, and the number of female players has increased to almost 40 per cent.”

Here in Cyprus, Aphrodite Hills is happy to welcome one and all to the padel courts. Both guests and visitors can enjoy the opportunity to try this exciting new sport, and equipment is available for rent and sale at the on-site Tennis Pro Shop.

“This is the start of another great sport at Aphrodite Hills Resort. Expanding racquet sports is a must on the island, and we’re very proud of being at the forefront of such a great new local initiative,” says Elena. “Padel truly is a game that everyone can play – and enjoy!”