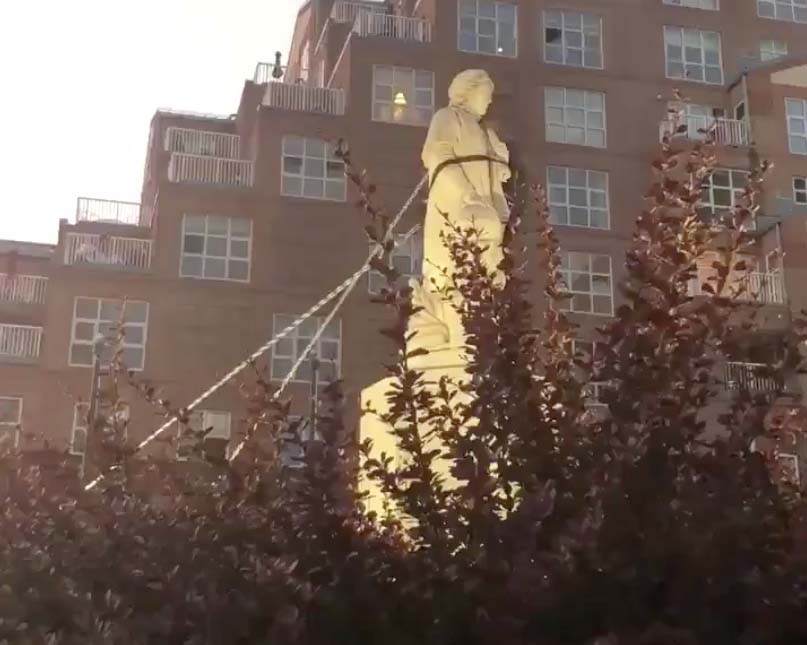 Protesters pull down the statue of Christopher Columbus in Baltimore, Maryland, U.S., July 4, 2020, in this still image obtained from a social media video. SPENCER COMPTON/via REUTERS THIS IMAGE HAS BEEN SUPPLIED BY A THIRD PARTY. MANDATORY CREDIT. NO RESALES. NO ARCHIVES.

As cruel and devastating as the Spanish conquest of South America was, it’s not accurate to call it a genocide

Last Sunday in the city of Baltimore, they tore down a statue of Christopher Columbus and threw it into the harbour.

According to the Baltimore Sun, the protesters who yanked it down with ropes were

We could waste a lot of time discussing the many ways this was wrong. In terms of the goals of ‘Black Lives Matter” it was a pointless distraction that merely provided fresh material for Donald Trump’s campaign of racist incitement and slander – but it may have been a deliberate provocation: the ‘protesters’ were almost all white.

For Little Italy, the inner-city Italian neighbourhood whose second- and third-generation immigrants paid to erect the statue 36 years ago, it was just mean and contemptuous. All they wanted to do was put up a statue of a famous Italian, and they knew that Christopher Columbus was the only one most of their fellow-Americans would recognise.

It was wrong because Columbus was not a slave owner (no Europeans owned slaves in his time). He was not a ‘coloniser’ (his geography was mistaken, but he was just trying to find a direct trade route to Asia). And he was certainly not a ‘white supremacist’: 15th-century Europeans had virtually no contact with people of other colours, so the issue didn’t even arise.

But let’s get to the point. There is one item in this indictment that is worth talking about, not because it is historically correct but because it shines some light on our current predicament. It’s this business about ‘perpetrators of genocide’ – the alleged genocide that wiped out 90 per cent of the people living in the Americas within a century after Columbus’ arrival in the Caribbean.

In the course of conquering the civilisations of the New World during the 16th century – Aztecs, Incas, Mayas, etc – the conquistadors undoubtedly killed tens or even hundreds of thousands of people. That’s what conquests do, and practically every human society has gone through that experience at one time or another.

A lot of other native Americans, perhaps hundreds of thousands in the course of the first century of Spanish rule, were worked to death, especially in the silver mines of Mexico and Bolivia. But there is no record or evidence of mass killing on the scale of the great conquerors of Eurasia like Genghis Khan and Tamurlane, nor is there any reason why the conquerors would have wanted to kill on that scale.

Yet 90 per cent of the population of the Americas – let’s say 45 out of 50 million people – perished between 1500 and 1600. Most of them were farmers, of course, and as the forests grew back on their abandoned farms it drew so much carbon dioxide out of the atmosphere that the global temperature dropped, causing (or at least exacerbating) the Little Ice Age of the 1600s and 1700s.

What killed the great majority of those people was not violence but waves of quick-killer Eurasian diseases to which they had no immunity:  influenza and pneumonic plagues, enteric fevers, smallpox, even measles. Just one wave of ‘cocoliztli’ (probably salmonella enterica, an enteric fever similar to typhoid) killed 80 per cent of the Aztec population of Mexico in 1545-50.

Quick-killer diseases only thrive in species that live in dense herds, where the killer virus or bacteria has a good chance of being passed on before its current victim dies. The native American populations mostly lived in densely populated civilisations by Columbus’ time, but they hadn’t left the common hunter-gatherer past behind long enough to develop such diseases.

By 1500 Europeans and Asians had been farmers living in dense populations with lots of cities for almost 5,000 years: plenty of time for those diseases to make the jump from their herds of cattle, sheep, and pigs to new human hosts. With each new disease, millions died:  the Antonine plague devastated the Roman empire in the 2nd century AD, and the Black Death killed about one-third of the populations of both Europe and Asia in the 13th century.

In the Americas, however, farming cultures with dense populations and cities were thousands of years more recent, and there were few herd animals. The populations had not yet developed quick-killer diseases of their own, and they had no defences against the Eurasian ones. They got hit by them all at once, and it almost wiped them out.

It wasn’t a genocide. In fact ‘first contact’ would have had the same devastating effect on New World civilisations if Aztec explorers with sea-going ships had ‘discovered’ Europe.

But the whole process has a serious message for us, because the current pandemic is just a later example of the same problem. New, highly infectious diseases are a chronic problem in mass societies like the current global civilisation. There will be more, and some will be more lethal.