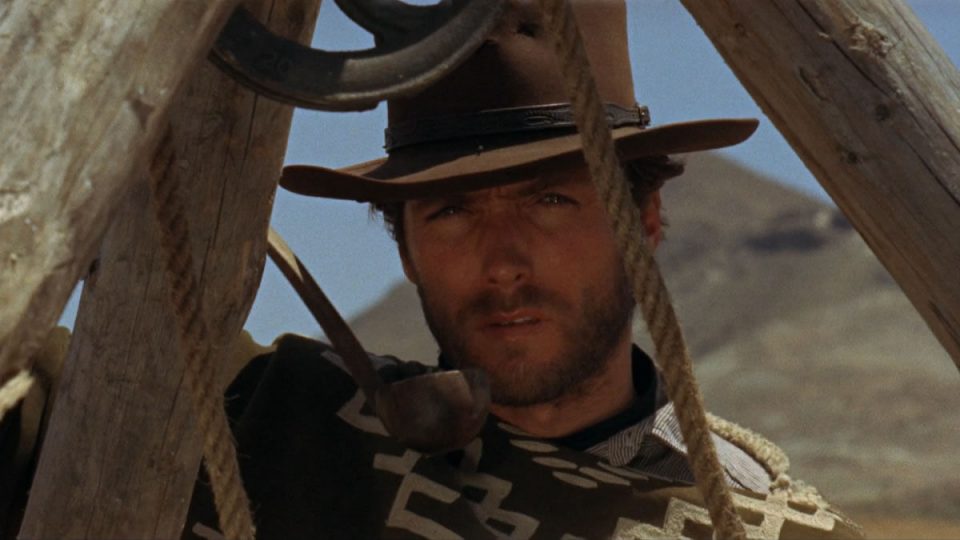 White against red, black against red, red against black, the outline of a man riding a horse against a solid backdrop flash against the screen. Colour customarily implies allegiance so the tricoloured alternation hints at our protagonist’s later escapades. A wandering whistled tune married to a string instrument and choral chanting accompany the animated introduction.

The titles, as well as the music itself, fade out and we cut to the dry, dusty ground of a sunscorched vista. A behatted man in a poncho drinks water from a well, observing the scenery around him. He notices two rough-hewn men shooting at the feet of a little boy who scurries away screaming in fear. A man comes out to comfort the boy.

The men accost him as well, kicking him to the ground. The two aggressors finally notice their one-man audience. Emphatic piano keys stab the silence, a flute heightens the suspicion before a harmonica dissipates some of the tension as the men ignore the man in the poncho.

He finally notices a woman watching the scene. She is inside a small house in the direction from which the boy appeared. When he locks eyes on her a sharp, high note briefly dominates the score. Something has stirred within our protagonist. She sees him as well but the music is more ponderous and assured in its melody. She slams the window blinds shut to the same, arrogant piano keys the scene began with. A perfect circle.

These are the first five minutes of Sergio Leone’s A Fistful of Dollars, the first installment in the Italian director’s Man With No Name trilogy. All three films, A Fistful of Dollars, For a Few Dollars More and The Good, the Bad and the Ugly, were scored by perhaps the greatest film score composer of all time Ennio Morricone.

Ennio Morricone passed away on Monday at the age of 91. There are a select few film composers who could be mentioned in the same breath as Morricone. John Williams and Bernard Herrmann are two, both scoring iconic and successful films for decades. But Morricone’s body of work is simply incomparable in scope and consistency, with more than 500 scores written in his lifetime, across mediums, eras and genres.

Morricone’s use of a classical sonata-allegro form provides material which is modified and reused throughout the film to progress the plot.

It is quite unusual for film compositions to exist before the actual film has been made but this was the case with some of Leone’s work, seeing as the director placed great attention and importance on the music. It is said that some scenes in Leone’s work are longer than necessary because he enjoyed the music score so much.

When asked about some trademark sounds used in the score in 2007, including the idea to use coyote howls and whistling, Leone was blunt. “They came from me, of course!”, before adding, “I can’t take the credit for the coyote howl – that was the work of the coyote.”