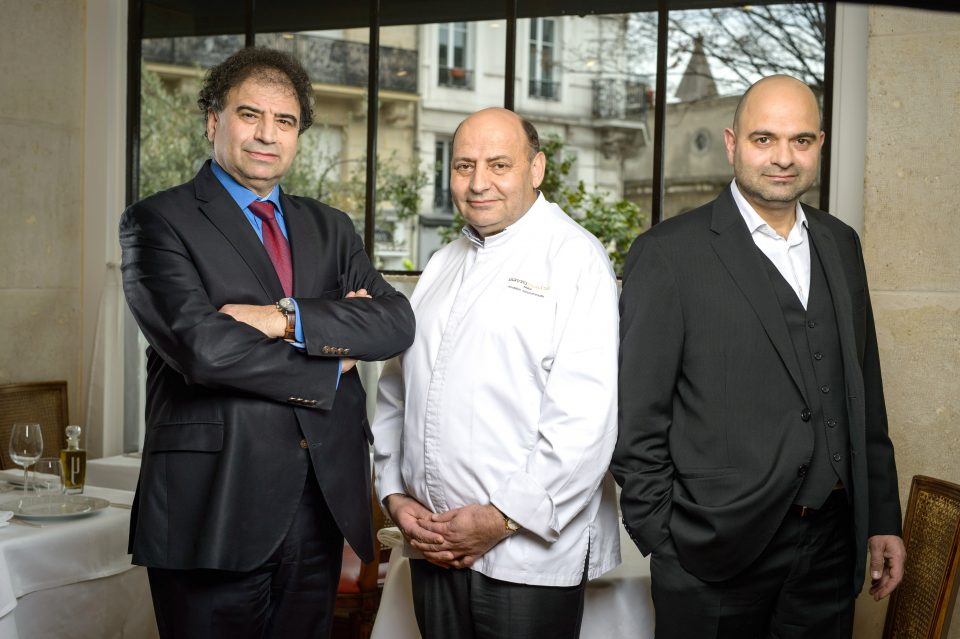 Andreas Mavrommatis and his two brothers, Evagoras and Dionysios

“Cyprus is losing its authenticity, We should work to preserve with pride our roots and remain authentic. We should put more emphasis on the authenticity, heritage and traditions of our island. Cyprus is a Greek island,” complained Cypriot Andreas Mavrommatis, a Michelin star chef and one of the best-known  successful Cypriot expats.

Speaking to the Cyprus Mail from the restaurant that bears his name in Paris’ chic and studious fifth arrondissement, Mavrommatis expressed his love for Cyprus’ culture and cuisine.

“There is still a wealth of Cyprus culture to be found in the villages, in Troodos, for example. There is some wonderful agro-tourism.”

The great chef said that he still remembers the taste of tomatoes, cucumbers and that of a peach picked from the tree in his father’s Agios Ioannis garden. His mother made an unforgettable trahana soup, and his father cured delicious hams.

“Flavours release all the joys and sorrows of the world, as Proust says. I search for the authentic flavours of vegetables and fruits from Ayios Ioannis, the handmade charcuterie that my father used to make. For me, couscous with tomato sauce and kolokasi with celery are comfort food: full and delicious,” he said.

But he complained that Cyprus cities are losing their identity. “When you arrive in Larnaca or Limassol, it’s all very built up and cosmopolitan. Cyprus must learn to impress its culture on these cities again.”

And there should be less construction on the seaside, he added.

“The same is true of Cyprus cuisine,” he said. “It should remain authentic, using local ingredients. There are some restaurants in the country working in this way. ‘Mavrommatis’ at the Four Seasons in Limassol is dedicated to both Cyprus and to Greek cuisines. Greek cuisine is made up of several regional cuisines. Every region of Greece has its own idiosyncrasy. The singularity of Cyprus gastronomy cuisine lies in the ingredients.”

Mavrommatis has earned the right to talk about the Cypriot identity, as from a very young age, his cooking and the businesses built around it in Paris emphasised the tastes of Cyprus and Greek cuisine.

He arrived in Paris at 20, and studied psychology and sociology at Jussieu (now called Paris VII), in the fifth arrondissement. He learned French at the Alliance Francaise, and kept the pot boiling by working in a Greek restaurant.

Mavrommatis decided to perfect his knowledge and technique at the Lenôtre school to ensure a successful transition between traditional and original cuisine. He achieved this thanks to his meetings and collaborations with Christophe Bacquié, Gabriel Biscaye and Christophe Raoux and other starred chefs.

Mavrommatis lived with his two brothers, Evagoras and Dionysios, near the university.

Instead, they devoted their careers to making Cypriot and Greek food using French techniques, but remaining faithful to traditions.

In 1981, they opened their first boutique traiteur-épicerie (a shop where cooked dishes are sold). “Our resources were very slim,” Mavrommatis said. “But we got the business going and it succeeded well.”

In 1988, they worked to develop the traiteur business to the highest level of quality.

And the épicerie became a restaurant called Les Délices d’Aphrodite (The Delights of Aphrodite), where Mavrommatis did the cooking and brother Dionysos managed the business.

The épicerie was moved a few metres away at Censier.

The restaurant and the épicerie was enthusiastically received, and the brothers opened several other épiceries in different parts of Paris.

Meanwhile, applause for Mavrommatis’ cooking, in the city where original chefs are highly prized, grew loud and sustained.

In 1989, the restaurant was honoured with the title ‘Best Foreign Cooking in Paris’, by the Salon de l’Agriculture, and was listed in the prestigious Gault & Millau guide.

“Then, in 1993, came the great moment,” Mavrommatis explained. “We opened the restaurant ‘Mavrommatis’ in the same spot.”

Here Mavrommatis devoted himself to Greek and Cypriot cuisine, using French techniques. He was rewarded by a Michelin star in 2018.

As always, Mavrommatis remains fixated on Cyprus, and he is the only Michelin star chef with a presence on the island. In 2006, he opened the restaurant Mavrommatis at the Four Seasons Hotel in Limassol. “The menu there represents faithfully my creative exploration of Greek and Cypriot cuisines, based on local ingredients.

“We support Cypriot products (cheese, wines, etc) and we import a lot of them throughout the year. We make a lot of recipes around halloumi because we want to show how it can be integrated into gastronomy.”

Could there not be other Cyprus restaurants that merit a Michelin star? “There are some that are developing in that way,” he said.

For Mavrommatis, Cyprus must continue to develop its economy, having emerged from the 2013 financial crisis and now from the coronavirus pandemic.

“We have important businesses in financial services, in tourism, and the country needs to grow in this way.

“But it must not lose authenticity. It must preserve its traditions, its culture.”

€1m to asphalt roads in Peyia