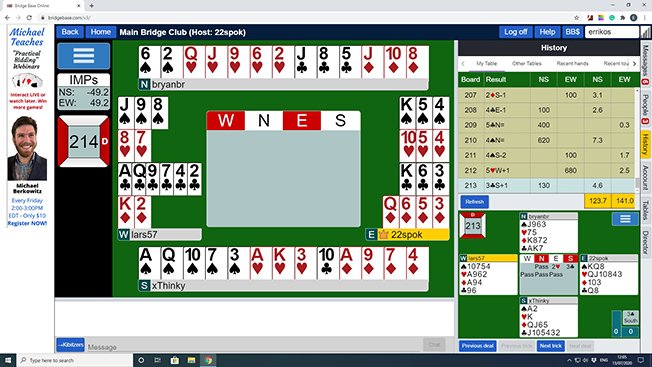 Philippos Frangos, President of the Cyprus Bridge Federation, organised the Interclub Teams League competition. The matches were played on BBO - Bridge Base Online. Fifteen teams from throughout Cyprus signed up to play

COVID-19 and the ensuing lockdown in Cyprus have turned our normal lives topsy-turvy. Suddenly our favourite group activities are relegated to wishful thinking. This was keenly felt by those who consider bridge to be one of the mainstays of their social life.

Gone were the face-to-face games; no more discussions on the proper bidding; no more questions about the play of the hand.

Not only was the game gone, but the social interaction that went with it was missing. Suddenly winning at bridge became secondary to the desire to somehow recreate the social links that spring up around bridge.

The solution was to be found in online bridge. Under the leadership of Philippos Frangos, President of the Cyprus Bridge Federation, and supported by a number of others from several clubs, instructions on how to play bridge online were created and disseminated.

So keen was their desire to play bridge that those who looked upon computers as a necessary evil except perhaps for e-mail, quickly fell in line and online bridge took off, opening the way in Cyprus for bridge players to interact socially, to play, discuss and enjoy bridge.

This new adventure first led to replacing live bridge sessions at clubs with online sessions. Afterwards, the thought came that if this worked for clubs, maybe it would also be a way to hold national bridge competitions.

Thus, Frangos organised the 2020 Interclub Teams League competition. The matches were to be played on BBO – Bridge Base Online. Fifteen teams with four individuals per team from throughout Cyprus signed up to play.

Starting from the first of April, each team would play one other team during that week. The next week it would play another team and so on. With 15 teams playing, by the end of 15 weeks, each team will have played all other teams. Each time a team won a match, it was awarded three points and one point for a draw. The team that won the most points would come in first and so on.

After three and a half months of one game per week for each team, the final match of all 15 teams was played on July 12. First place went deservedly to Beauties and the Beast. A fight for second between Lefkara and the Fantastic Four went all the way to the wire, with Lefkara finishing second by one point.

Many thanks for the hard work of Frangos and the assistance of Ian Hines and Frosso Tillyris, without whom this competition could not have taken place. Its success is also proof that online bridge and bridge enthusiasts make a great team.

Winners of the Cyprus Bridge Federation Interclub Teams competition are: