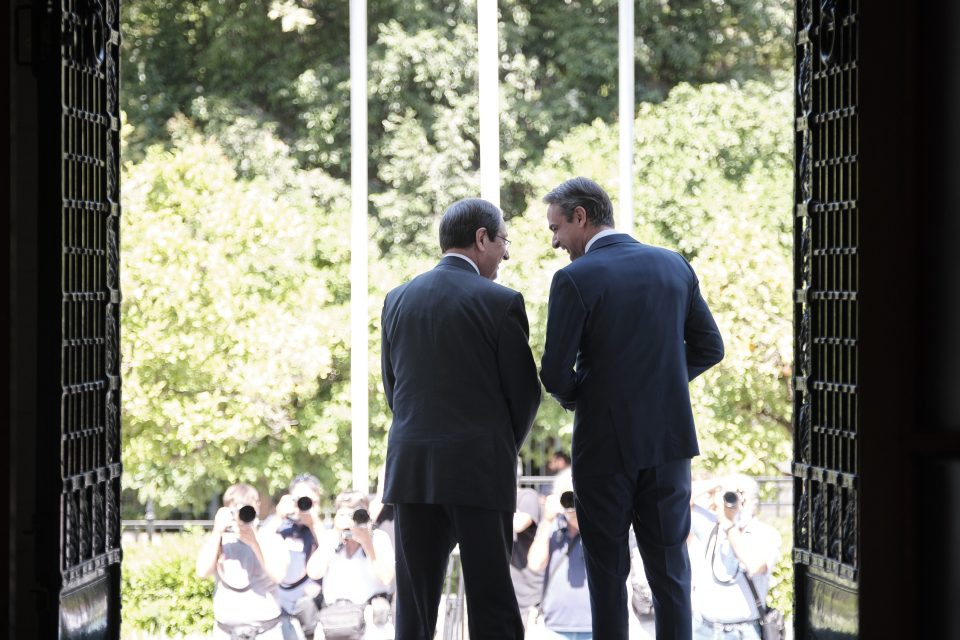 Cyprus and Greece are in perfect sync when it comes to Turkish provocations in the eastern Mediterranean, the leaders of both nations said Tuesday, reiterating however that they seek dialogue with Ankara rather than confrontation.

“We seek dialogue, peace and stability,” President Nicos Anastasiades said during a state visit to Athens, where he held talks with Greek Prime Minister Kyriacos Mitsotakis.

He was speaking during a joint news conference after their meeting.

Anastasiades said it was clear that it is Turkey who is the disruptor in the region, and that Greece and Cyprus are merely defending their sovereign rights.

“The conclusions from our talks are shared. We will not allow Turkey to prevail in its intention, which is none other than to create an unnecessary crisis,” the president said.

Nicosia, he added, expects the EU to take a more effective intervention.

The Greek leader noted he and Anastasiades reviewed developments regarding Turkey’s aggressive posture, both in terms of rhetoric and concrete actions.

Turkey is openly violating the sovereign rights of Cyprus – and by extension those of the EU – which is why the bloc needs to adopt a common stance on the issue.

The EU, said Mitsotakis, should draw up a list of specific sanctions against a country [Turkey] which acts like a troublemaker and threatens peace and stability in the region.

“We never refused dialogue nor the principles of international law and good neighbourly relations, but not under blackmail or underlying threats.”

The two leaders also discussed the EU recovery fund, as well as Turkey’s recent decision to turn Hagia Sofia into a mosque.

Officially, Greece and Cyprus were aligning their positions ahead of the European Council meeting later this week.

On Hagia Sofia, Anastasiades said Turkey’s action to transform it into a mosque is an affront to cultural heritage and incommensurate with that nation’s aspirations to appear secular.

For his part, Mitsotakis said Athens and Nicosia agree that Covid-19 relief to countries whose tourism industries have been impacted should for the most part come by way of subsidies rather than loans and without any conditionalities.

Prior to the press conference the two leaders held talks with their respective delegations. The Cypriot delegation consists of Foreign Minister Nicos Christodoulides, government spokesman Kyriacos Koushios, Cypriot ambassador to Greece Kyriacos Kenevezos, and the head of the president’s diplomatic office Kyriacos Kouros.

During the day, Anastasiades also held a courtesy meeting with Greek President Katerina Sakellaropoulou, who accepted an invitation to visit Cyprus in late September.

At around 7pm the president was scheduled to meet Alexis Tsipras, leader of the Greek opposition party Syriza.

Anastasiades and his delegation were due back to the island late in the evening.

On Monday, the EU Foreign Affairs Council stopped short of announcing steps against Turkey over the latter’s increasingly assertive and aggressive posture in the eastern Mediterranean.

Josep Borrell, the EU’s High Representative for Foreign Affairs and Security Policy, is expected to present concrete measures in August.

Turkey, which recently acquired a third offshore drilling ship, has intimated that it would dispatch the vessel east of the Greek island of Crete to explore for oil and gas reservoirs. Greece has declared the area as part of its own exclusive economic zone (EEZ).

Borrell’s description of the area as “disputed waters” drew a strong reaction from Athens.

EU Spokesperson Peter Stano later clarified that Borrell does not consider the territorial waters of EU member states to be disputed, telling news outlet Euractiv that the term “disputed” is used by Turkey.

Diplomatic sources told Euractiv that Athens had called for sanctions that would “paralyse” Turkey’s economy, targeting key areas such as the banking sector.

Pandemic knocks Singapore into recession as GDP plummets 41% in Q2