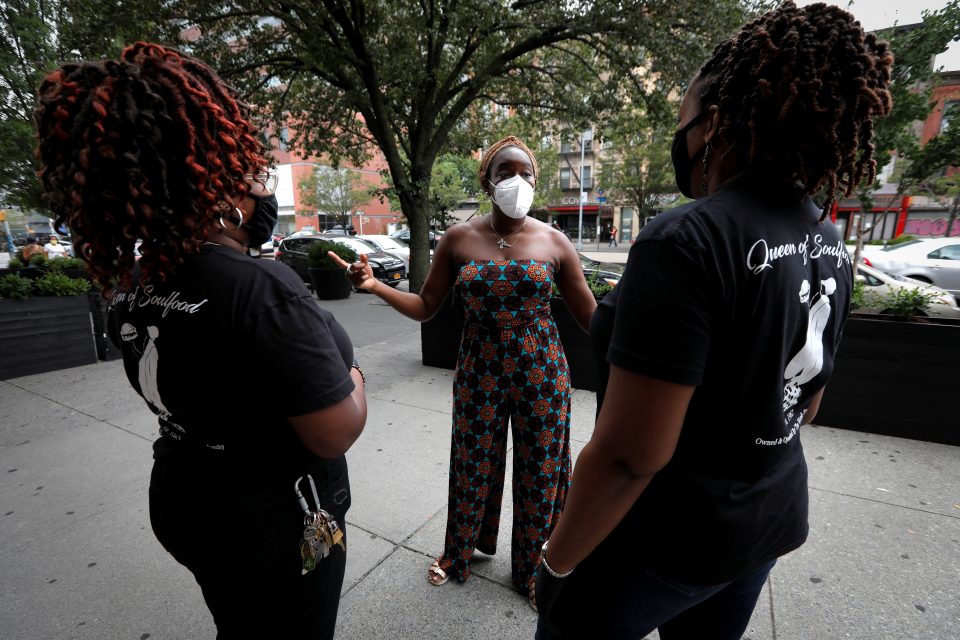 Tren'ness Wood, granddaughter of the late Sylvia Woods and heir of Sylvia's Restaurant, speaks with her cousin and COO Taniedra McFadden (L) and her sister Kendra Woods (C) in Manhattan in New York City, U.S. Picture taken by Mike Segar

Sylvia’s, a soul food restaurant on Malcolm X Boulevard in Harlem, New York, saw a welcome bump in donations and revenue from new customers in early June following calls to “buy Black” after the death of George Floyd.

But the increase didn’t help the 58-year-old landmark restaurant turn a profit. The coronavirus pandemic has limited its operations, forcing the Harlem staple to lay off most of its staff and slash revenues.

Owner Tren’ness Woods-Black welcomed the publicity but said she is more concerned about her core clientele, a devoted group of mostly Black patrons who used to dine at the restaurant every day.

While the restaurant industry is expected to take two to three years to return to pre-COVID-19 revenue levels, Woods-Black said it would take even longer for spending among Black Americans to bounce back.

“I’m expecting that from the Black perspective Harlem is going to come back very different,” she said. “When the nation bleeds, Harlem hemorrhages.”

Woods-Black is one of many Black business owners in New York who fear that the disproportionate economic impact of the coronavirus pandemic on their communities might be long lasting. Many are worried the number of black business owners in the city will shrink even further. Though Black Americans make up 22% of New York City residents, they account for only 2.1% of business owners, according to city data.

Harlem Skin and Laser Clinic and nail salon Junie Bee Nails are just a few of the local Black-owned businesses in the neighborhood that have decided to shutter their locations permanently.

Black buying power grew to $1.3 trillion in 2018 up from $320 billion in 1990, according to the latest data by consumer research firm Nielsen. But spending power and consumption are expected to decline, as Black Americans bear the brunt of the crisis due to a longstanding wealth gap and lower access to financing, education, healthcare and home ownership. (For a graphic on the U.S. economic racial divide and pandemic’s impact on the Black community click https://tmsnrt.rs/2Zf1jB5)

In Harlem, where 56% percent of the population is Black, lines for food pantries have wrapped around blocks.

“The consumption and spending power of black communities was most highly hit because of high unemployment,” said Belinda Archibong, an assistant professor of economics at Barnard College. “It’s a big challenge in terms of thinking of how we will address these issues to ensure that the racial wealth gap doesn’t worsen.”

A few blocks away from Sylvia’s, Mark and Katrina Parris are planning to pivot their lifestyle store NiLu to be more online.

“If the local economy is shrinking, if I make myself available through e-commerce, hopefully, you know, I can survive,” Mark Parris said.

The economic hit to the neighborhood is already visible. Seeing increased need, Sylvia’s converted its restaurant into a food pantry on Sundays, when other pantries were closed.

Concern among Black business owners in Harlem often stems from past experiences.

Karl Franz Williams, owner of cocktail bar 67 Orange Street on Frederick Douglass Blvd, had to close his first venture during the 2008 financial crisis.

During the pandemic, Williams secured a loan for his business through the Paycheck Protection Program. But he is concerned about what will happen after the programs run out.

“There are issues for Black and brown entrepreneurs that were there before,” said Williams. “They are considered less bankable with equal credit scores and resumes, that is all part of the problem.”

Connie Evans, AEO’s president and chief executive, said availability of capital to Black-owned businesses has improved since 2008, but she urged lenders to do more.

“These local businesses in the community, just because they don’t have a strong balance sheet like a large corporation doesn’t mean they are high risk,” Evans said. “They are essential in the community.”

Many U.S. financial companies have pledged funds in support of the Black community amid protests that erupted since Floyd died on May 25 after a Minneapolis police officer kneeled on his neck for more than eight minutes. Bank of America Corp recently pledged $1 billion to address racial and economic inequality.

Still, some Black business owners voiced skepticism that support for the community would be sustained.

Tiffany Bowen, owner of Harlem Hookah on Malcom X Blvd, who secured a PPP loan in the second round of funding to settle rent and salaries when her business closed, said, “I’ve heard these stories before, but yet we still have such poor numbers for Black businesses.”

“When has the financial industry ever come through for people of color?” Bowen said.

Coronavirus: More tests to be carried out on arrivals