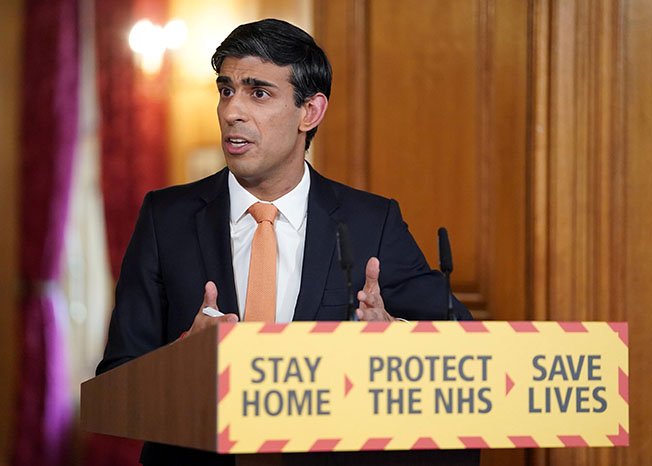 Britain’s economy stumbled out of its coronavirus-induced slump in May, casting doubt on the chances of a rapid rebound and suggesting more government help to kickstart recovery may be on its way.

Gross domestic product rose 1.8% after lockdown restrictions were eased slightly, the Office for National Statistics said – a smaller rebound than any economist had forecast in a Reuters poll and following a record 20.3% contraction in April when curbs were tightest.

With activity in the services sector having failed to pick up as expected, Tuesday’s figures are likely to fuel doubts about whether Britain will enjoy a quick, ‘V’-shaped bounceback as lockdown curbs are lifted further.

“Today’s figures underline the scale of the challenge we face. I know people are worried about the security of their jobs and incomes,” finance minister Rishi Sunak said.

But temporary government support for more than 9 million jobs will be phased out between August and October, and the Bank of England has warned of the risk of a big rise in jobless numbers.

More than 44,000 people in Britain have died from COVID-19, the highest death toll in Europe, and a second wave of infections could bring a new round of lockdowns, derailing recovery.

“More significant fiscal stimulus is likely to be needed to help kickstart a sustained recovery,” said Suren Thiru, head of economics at the British Chambers of Commerce.

The pick-up in output in May was probably down to “the partial release of pent-up demand as restrictions began to loosen, rather than evidence of a genuine recovery,” he said.

Britain’s government first closed non-essential shops and other businesses to the public on March 23, shortly after ordering the closure of bars, restaurants and cinemas.

Over March and April economic output slumped by a record 25.9%, slightly more than previously thought, and output in May was 24.0% below its level a year earlier.

The International Monetary Fund forecast last month that Britain’s economy would shrink by more than 10% this year, a historic decline though a smaller one than it predicted for France or Italy.

“Hopes of a ‘V’-shaped recovery are fading fast, and I suspect we’re looking at something resembling far more of a ‘W’ – a series of improvements and relapses, before a proper recovery takes hold,” said Tom Stevenson, an investment director at fund manager Fidelity International.

The wholesale and retail sector made the biggest contribution to growth in May after being the largest drag in April.

Industrial output and construction also recovered strongly, in line with forecasts, after a very large hit in April.

May’s figures offer only a limited guide to how the economy will ultimately recover, as more significant relaxations to lockdown restrictions for shops and restaurants in England only started in June and July.

Private sector data has shown some signs of recovery in May and June, as lockdown measures eased further.