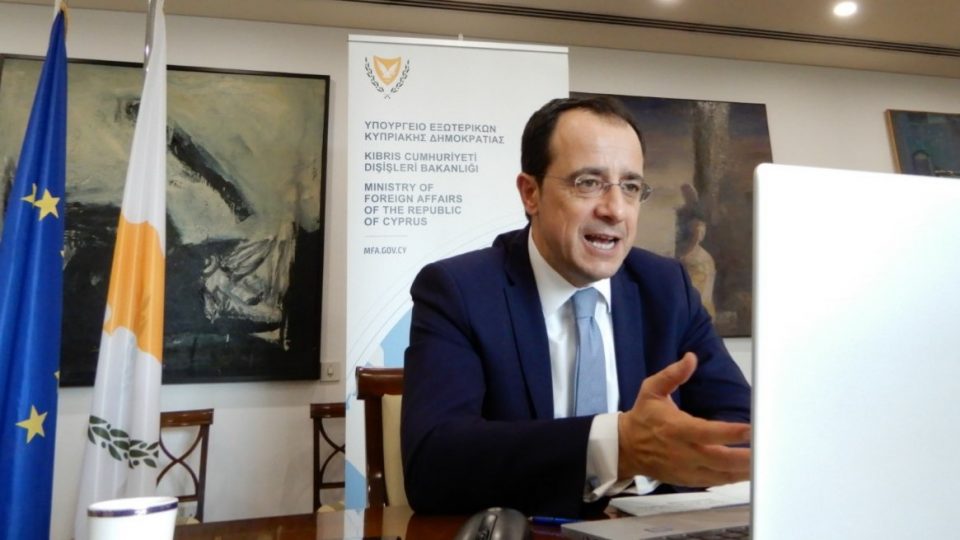 Turkey has proposed talks between Greek and Turkish Cypriots but excluding Mustafa Akinci, Foreign Minister Nicos Christodoulides said on Wednesday, accusing Ankara of seeking to present its ‘delinquent behaviour’ under the guise of protecting the rights of Turkish Cypriots.

The minister had been asked whether the German presidency of the EU had sounded out Nicosia in light of the dialogue it was apparently sponsoring on eastern Mediterranean matters.

Turkish Foreign Minister Mevlut Cavusoglu revealed on Tuesday that Greek and Turkish officials had met in Berlin over the weekend, in what appeared to be a meeting that was kept away from the public light.

Christodoulides said Turkey was trying to present its delinquent behaviour in the region through the so-called protection of Turkish Cypriot rights but its arguments lacked sincerity.

He said EU colleagues had informed him about the Turkish attempt, noting that “it is interesting  and an indication of the expediency Turkey is trying to serve that, through its proposal for the so-called need for dialogue between Greek Cypriots and Turkish Cypriots,  it says that it must be done with (‘foreign minister’) Mr (Kudret) Ozersay and not (the Turkish Cypriot leader) Mr Akinci.”

Christodoulides said no Cyprus-related issues had been raised during the Berlin meeting.

The foreign minister said President Nicos Anastasiades will meet German Chancellor Angela Merkel on the sidelines of the European Council summit between July 17 and 18.

It covers the area southwest of the island for the period between July 18 – August 20.

The new Navtex followed one that expired on June 18. It covered the area that includes blocks 6 and 7 of Cyprus’ EEZ, which have been licensed to Eni and Total.

This makes it the seventh time this year that Turkey has attempted to drill within the Cypriot EEZ.

Anastasiades condemned the Navtex, adding that Turkey’s actions to ignore international law and European principles and values would be raised during the council.

“It is a strong message to Europe about what they (Turkey) mean when they say they supposedly seek dialogue and supposedly try in every way to be in line with international law,” Anastasiades said.

Earlier in the day, the president met with the UN Secretary-General’s special representative Elizabeth Spehar, ahead of the Security Council’s discussion on the renewal of Unficyp’s mandate on July 29.

According to the foreign minister, the meeting was constructive, with discussion focusing on the Republic’s observations on the draft report.

Christodoulides said the president delivered the observations in writing while highlighting the need for objective reporting of everything that happened in recent days.

He said there was an effort by some quarters to confer a political expediency on measures that were put in place to tackle the coronavirus pandemic.

There is no political expediency behind the decisions, especially those relating to the crossings with the north, Christodoulides said.

They are decisions based on expert recommendations.

“We have not yet overcome the pandemic. You see what is going on in other European states and neighbouring countries and the government has to be in constant vigilance to avoid a new wave of the pandemic as far as possible,” Christodoulides said.

Back in March, Unficyp issued a statement saying it was concerned over the “ongoing disruption caused to people on both sides” by the government’s decision to shut four crossings for nine days so that more effective checks for the coronavirus were enforced.

“While the UN supports all effective measures to address any potential public health emergency, it is imperative for the two sides to coordinate closely in order to provide a comprehensive response,” Unficyp said.

It followed the decision to close the crossings of Ledra street, Astromeritis, Lefka and Dherynia.

Anastasiades called this an “unfortunate intervention” in the affairs of a sovereign state, raising the matter during Wednesday’s meeting, according to Christodoulides.

“There cannot be announcements that do not reflect the real situation in relation with the crossings,” he said.

And it was not just the crossings issue. Christodoulides said the UN did not say anything when the Turkish army prevented Nicosia municipality from shoring up an abandoned crumbling coffeeshop, the Spitfire, that skirts the buffer zone in the old town, nor was there any reaction to numerous Turkish statements on the intention of opening up Varosha.

78 per cent of young Cypriots are digital savvy