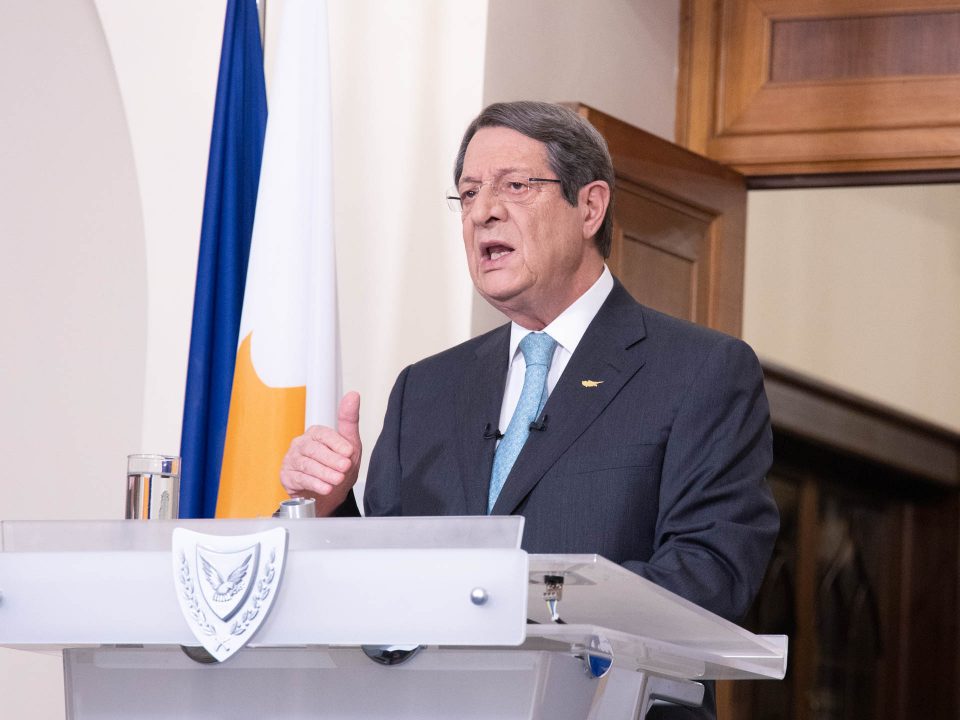 The Greek Cypriot side said it was willing to discuss setting up a mechanism for direct contacts at military level between the National Guard and the Turkish occupation forces, but not with the north.

The Turkish Cypriot side however has stated its readiness to open channels for effective cooperation on various matters of islandwide significance.

Both leaders have sent the UN Secretary-General their reports on their contribution as regards helping to reach a sustainable and comprehensive settlement which were included in Antonio Guterres’ latest report on his good offices mission released on Wednesday evening US time.

Anastasiades said that as regards the call by the UN Security Council for an effective mechanism for direct military contacts last July, the Republic of Cyprus has already expressed readiness to discuss the establishment of such a mechanism between the National Guard and the Turkish occupation forces, comprising their commanders and the force commander of Unficyp as facilitator.

“I wish to inform and assure that we stand ready to engage with Unficyp to this end, at the earliest opportunity,” Anastasiades said, rejecting at the same direct cooperation with the Turkish Cypriot side. While the government is willing to discuss cooperation at a military level, he said, “ideas advocating the establishment of mechanisms on a wide array of issues coupled with extensive references calling for cooperation between the two ‘sides’ are counterproductive and only serve towards deviating efforts away from the fundamental goal of reunification.”

Such ideas, he said, “in conjunction with the revival of the totally unacceptable notion of contacts with the secessionist entity “without prejudice to recognition”, only serve to promote the normalisation of the status quo and thus the permanent division of Cyprus.”

Turkish Cypriot leader Mustafa Akinci, on the other hand, citing the Security Council last January, said in his report that the two sides need to “break long-standing taboos and open up channels for effective cooperation on various matters of islandwide significance, such as environmental protection and crime prevention.”

Akinci said his community has worked in close collaboration with Unficyp to formalise an ad hoc arrangement to facilitate the handover of third country nationals sought for criminal proceedings from either side through the Technical Committee on Crime. He added that the Turkish Cypriot side has also been working with Unficyp on the establishment of other mechanisms, including at military level.

Akinci also said it was “high time” the two sides entered effective dialogue on hydrocarbons and referred to his July 2019 proposal on jointly setting up a committee to discuss the issue of hydrocarbons.

Anastasiades also said in his report that for the Greek Cypriot side “there is no alternative but peace.” He added that despite the continuous and escalating provocations on behalf of Turkey he maintained communication with the leader of the Turkish Cypriot community.

Throughout the period of the Covid-19 pandemic, he said, the Republic of Cyprus has been facilitating in several ways the Turkish Cypriot community, including allowing crossings of patients and facilitating requests for repatriation. He also mentioned the provision of medications and medical supplies to the north and the immediate response to requests to provide aerial assistance to tackle fires that had broken out in the north.

Akinci mentions in his report efforts to coordinate with the Greek Cypriot side to address the pandemic, and that he was the one to invite Anastasiades to convene the bi-communal Technical Committee on Health to jointly respond to the emerging crisis.

He said he continued to call for more dialogue and cooperation, especially in the wake of the “abrupt unilateral decision” of the Greek Cypriot side to close four of the crossing points last February.

He also referred to the recent “extremist and irredentist attacks at the mosques” in Limassol and Larnaca and called on all technical committees to further reinforce their activities and continue more powerfully to respond to such attacks with the aim of fostering tolerance, diversity and reconciliation.

The full report including the two leaders’ notes can be found here.